Be(ware) The Swallowing: Hungry Homes In THE TEXAS CHAIN SAW MASSACRE And HOUSE

Not all homes are haunted — some are hungry. 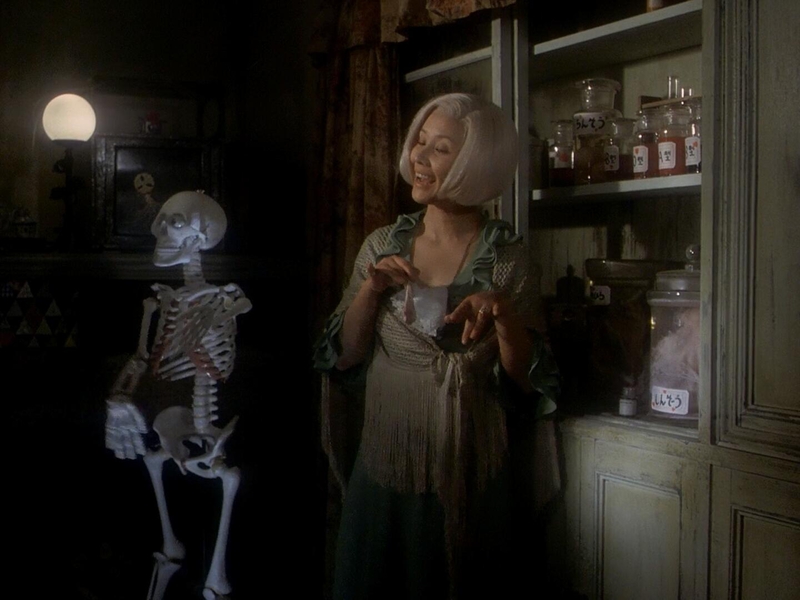 From The Castle of Otranto to The Fall of the House of Usher, The Old Dark House to The Haunting of Hill House to The Amityville Horror, the family home is among the most potent metaphors in horror and gothic film and literature—and for good reason. The family unit is an architectural structure but it is also a legal one, the business of which has transformed and evolved, informed as it is by race, class, gender, sexuality, age, and ability as intersecting legal identities. It's out of these precise tensions and anxieties that gothic horror was birthed as a modality; why it has always been located squarely within the estate, whether it be castle (Dracula), manor (The Woman In White), plantation (Beloved), family home (Poltergeist, Eve's Bayou), or city apartment (Candyman).

Oftentimes, a house delineates the relative safety of the Inside in opposition to the terror of the Outside (The Strangers, The Last House On The Left, You're Next, Night of the Living Dead, The Hills Have Eyes), but by this same logic, they also represent the ideal location to explore the terrors explicit to the Inside: the horrors that quite literally start at home (Sharp Objects, Raw, Hereditary, Rosemary's Baby). 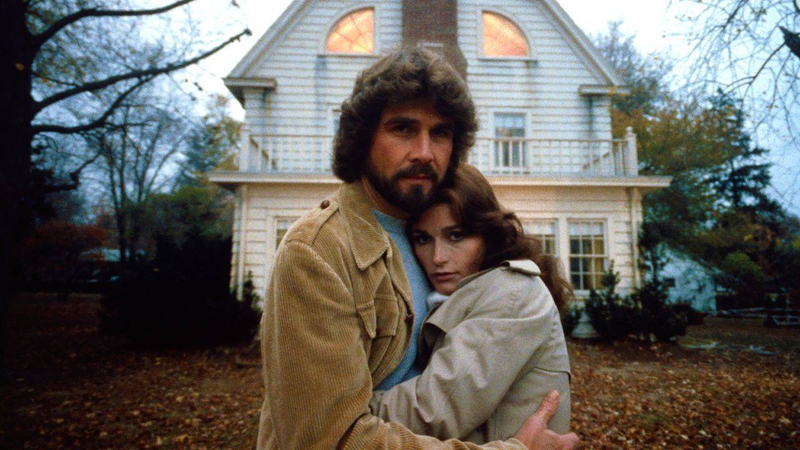 Edgar Allen Poe's The Tell-Tale Heart gave a house a heartbeat; The Amityville Horror, eyes. In each iteration, the house is both structure and body, the mouth of which is distinctly located in the front door. But there is a difference between a house that is haunted and one that is hungry. Sometimes they are both, but not always. 124 Bluestone Road of Toni Morrison's Beloved is both haunted and hungry. The Victorian manor featured in The Others is haunted but more repulsed than hungry. And the house belonging to Mommy and Daddy Robeson in The People Under the Stairs is hungry but not necessarily haunted. A hungry home has an appetite. It beckons. Seeks communion. Wants to incorporate you, to make you a part of it. Rarely does this stem from the house itself but the unsatiated hungers of those who animate it; who dwell within its walls and sometimes, beneath its floorboards.

The effectiveness of the motif in first the gothic, then horror, is that the house rarely represents the culture of a single family, but rather signifies the architecture of broader systems. A house of law, of worship, of medicine is, after all, still a house. When we approach the nation-state as home to a national body, its interlocking legal and economic systems are akin to its digestive system. For instance, climate change is a material, existential threat to global health and well-being, and it is an issue primarily driven by the mass waste associated with mass exploitation and consumption.

In effect, a relatively small number of individuals have filled our collective home- our collective body- with poisonous trash and have spent decades refusing to confront the mess while forcing us to be active participants in our own demise. My point is that the language and rhetoric of the home can always be expanded outward to that of the nation-state (and further, to the planet), or collapsed to that of the body. The bloodmatter of gothic horror oozes from the space between these tensions. How do they show up in films like The Texas Chain Saw Massacre and House? 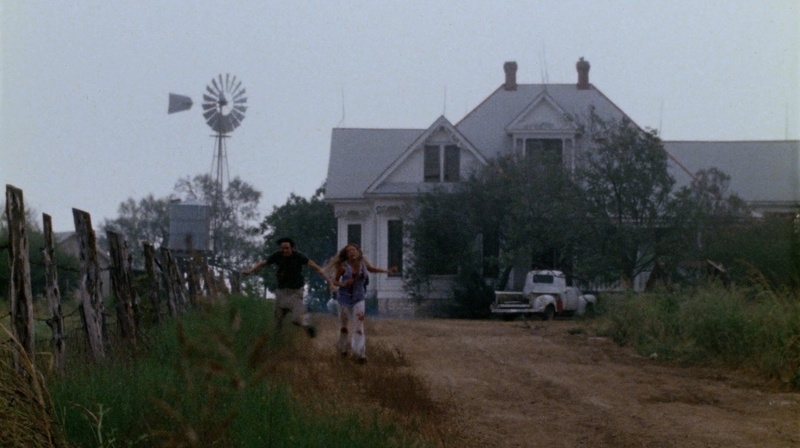 The Sawyer family farmhouse is among the hungriest homes in "the annals of American [horror] history." Not only is it the primary example of a house that is hungry as opposed to one that is haunted, but it's also among the most successful renderings of the meat grinder that is American capitalism. If we've long accepted the haunted house as a metaphor for America, The Texas Chain Saw Massacre revamps that metaphor to one of a cannibalistic slaughterhouse.

In essence, the Sawyers represent the byproduct of industrialization. When Sally (Marilyn Burns), Franklin (Paul A. Pertain), and their friends, Pam (Terry McMinn), Kirk (William Vail), and Jerry (Allen Danziger) first pick up the hitchhiker (Edwin Neal), they debate the most humane way to slaughter an animal, not recognizing the brutality is altogether irrelevant to their new acquaintance. "The new way" puts people out of work, and in a society that literally assigns value to human beings in dollar amounts, no money means no humanity. It means you become something else to the perception of the Outside, something disposable and grotesque, in a process that essentially reduces life to meat. The Sawyers represent- in equal measure- the masked face of capitalism as a cannibalistic entity, as well as its victims. 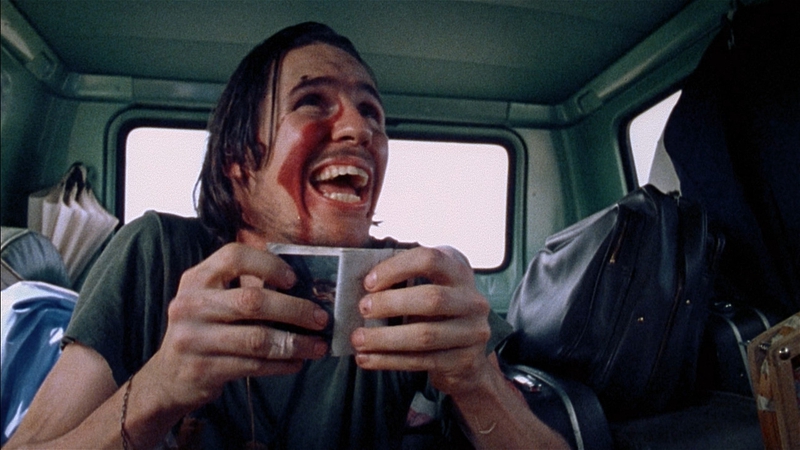 And what of their victims? Capitalism represents one occasion of The Swallowing in The Texas Chain Saw Massacre, but so too is the patriarchal nuclear family structure, and while that certainly includes the Sawyer home, it's equally true of Sally and Franklin Hardesty. The events that set the film in motion are tied to the Hardesty family in particular; first, the desecration of their grandfather's grave, then the pull of nostalgia when they decide to visit an old family estate. Its adjacency to the Sawyers' is an important juxtaposition. They are outsiders and not, and their roles could easily be reversed in another timeline. As such, they represent a dissolution of the binary nature of Western society: each family unit, the hunters and hunted in equal measure. The primary difference is that the Sawyers are aware of this, and Sally, Franklin, and co are not. 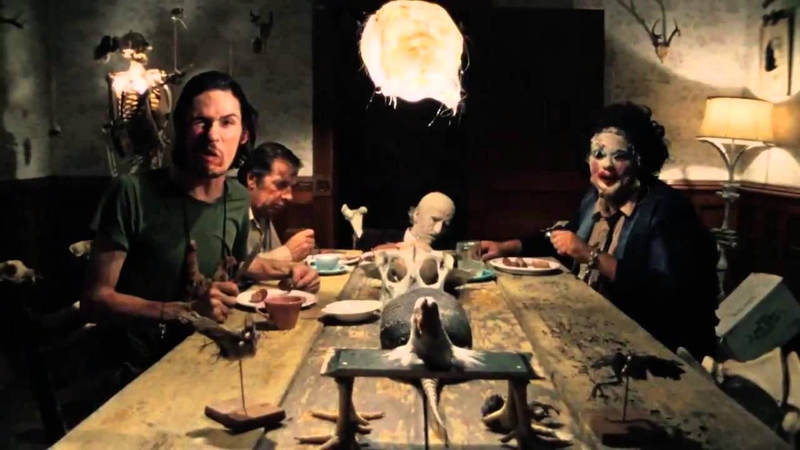 There's something to be said about their naivete, the sweat-drenched idyll of the Central Texas landscape, and the predatory reality of the American Dream, all of which leads the group to the Sawyers' doorstep. When Pam and Kirk first come upon the house, Kirk notices a tooth drop from the doorframe, which he jokingly presents to Pam. Shortly thereafter, both are dragged by Leatherface (Gunnar Hansen) through the mouth of the house. The group is picked off one by one until only Sally remains for Tobe Hooper's delightfully perverse rendering of the family dinner table. Grandpa (John Dugan) is the desiccated patriarch who everyone falls over themselves to accommodate; the proprietor (Jim Siedow), a father figure opposite Leatherface as mother; the hitchhiker, the rebellious child always up to mischief.

The brilliance of the scene is of course, predicated on Hooper's grasp of absurdist realism. After countless viewings, why does Leatherface's doll mask- his specific performance of femininity- strike me as the deepest truth about the performance of femininity under capitalism? How does Grandpa's comically inept attempts to bludgeon Sally to death while being cheered on and lionized by the other family members reveal the deepest truth of male dominance under patriarchy? How many times has a family dinner led me personally to want to throw myself through a window and run screaming into the night? (The answer is a lot). In The Texas Chain Saw Massacre, the Sawyer house is body, structure, and institution–and it's dying to have you for dinner. 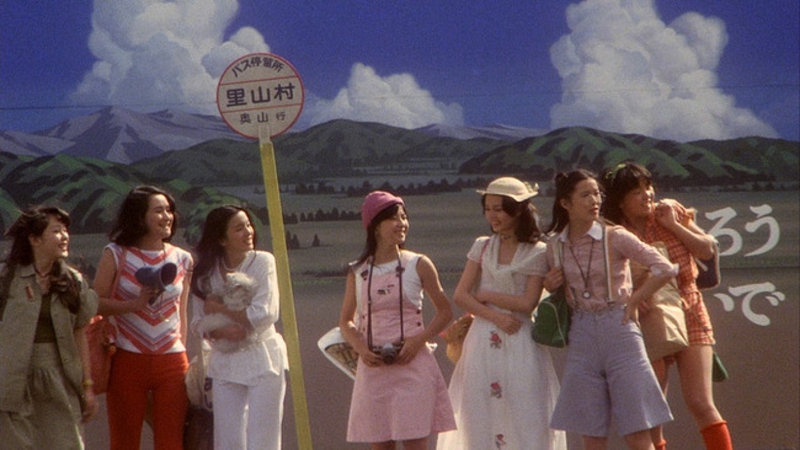 The first thing to know about Nobuhiko Obayashi's experimental horror film, House, is that it was initially developed as a response to Jaws; the second, that the story was in part conceived of by Obayashi's then-adolescent daughter, Chigumi Obayashi. There's an unabashed hyper-femininity to this film that doesn't stop at its Spice Girls-esque cast of characters (though its release precedes the Spice Girls by nearly two decades), but lives, rather, in its preoccupation with the disappointments of femmehood.

We meet Gorgeous (Kimiko Ikegami) at the height of her social power. Alongside Fantasy (Kumiko Ohba), Prof (Ai Matsubara), Kung Fu (Miki Jinbo), Sweet (Masayo Miyako), Mac (Mieko Sato), and Melody (Eriko Tanaka), she's part of the girl gang of the century, which is to say nothing of her rich, doting father who spoils her with an enviable upcoming family vacation…. That is, until her plans are disrupted by the sudden introduction of a new stepmother-to-be with boundary issues. Ryoko (Haruko Wanibuchi) is presented as Gorgeous's "new mom," the disappointment of which becomes more legible when we learn her actual mother has died. Alone in her room, she tells her framed photograph, "Dad's disappointed us, Mom." 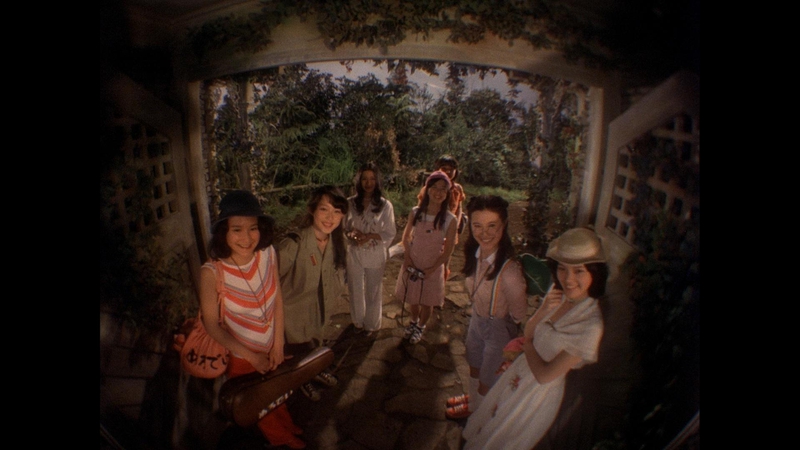 With that disappointment, Gorgeous decides to scrap the new family plans and impulsively invites her friends to spend their vacation at her auntie's house, her mother's family home, out of a desire to feel closer to her. Though they are meant to be chaperoned by their teacher, Mr. Togo (Kiyohiko Ozaki), his blunders leave them at the train station unaccompanied with promises to meet them there. En route, Gorgeous tells the group about her family's history in this house; how Auntie (Yoko Minamida) and her fiance (Tomokazu Miura) were meant to be married and live there together, a future disrupted when he was drafted during World War II. He promised to return, and Auntie promised to wait "forever," but in the end, his plane was shot down and she was never able to leave the house. With this background, the girls are diligent upon their arrival, cooking and cleaning and tending to Auntie, who is full of affirmation of how happy she is that the girls have come. As they drop a watermelon into a well to chill, she tells Mac she "sure looks tasty, being round and all." 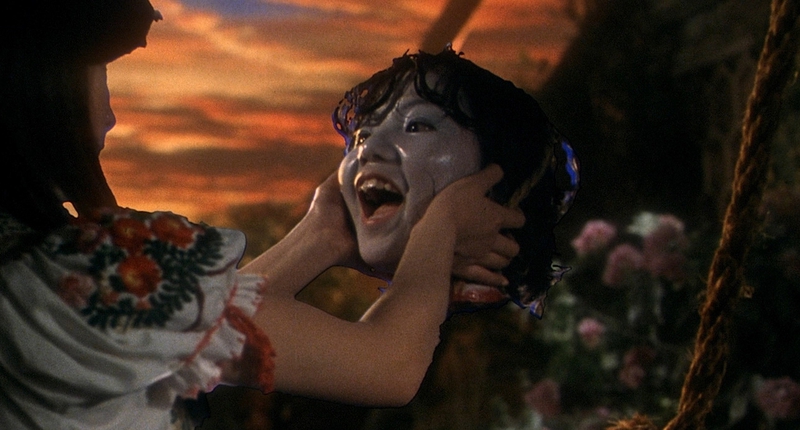 When Mac is the first to disappear, Fantasy discovers her decapitated- but animated- head in the well, and shortly thereafter, Auntie emerges with renewed strength and vigor. "You gave me energy," she offers in explanation. When they return to the well, all they find is the watermelon, which everyone eats gleefully, except for Fantasy. Watching Auntie, she swears she sees an eyeball pop out of her mouth where only watermelon should be. 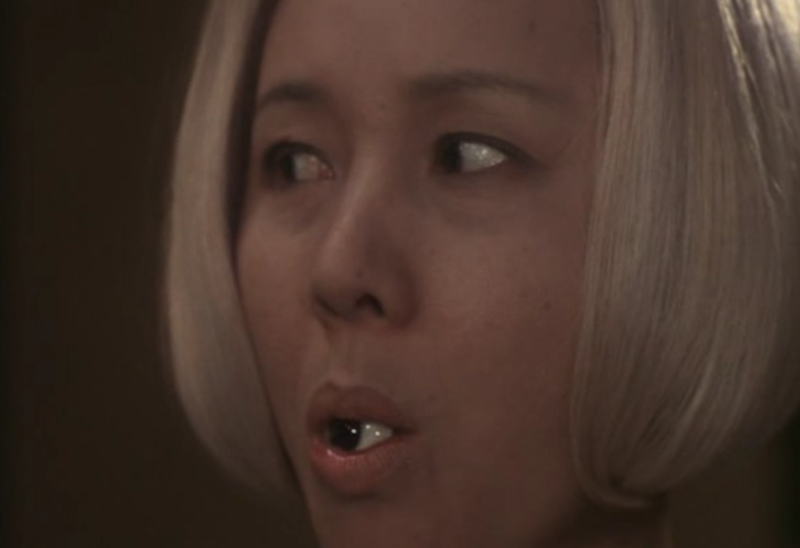 Following the structure of a slasher, the girls are quite literally subsumed by elements of the house: a mirror, a horde of mattresses, a piano, a clock that bleeds. With much breaking of the fourth wall, Auntie is revealed to be something of a cannibal, a witch, a ghost, driven by a hunger so consuming, it extends beyond the limits of her body and animates the house itself. If a door is a mouth, so too is a well. Indeed, Gorgeous discovers that her aunt had been dead for years, but was so determined to continue waiting for her fiance, "her body remained alive after her death. And she eats all the unmarried girls who come here."

Auntie is, of course, one rendering of The Swallowing; her house, another. But the mirrored tensions between her disappointment at the life the war denied her, Gorgeous's disappointment with her father, and even Fantasy's disappointment when Mr. Togo never arrives to save them, suggest this disappointment- this affectedness- is the real source of hunger. We all crave a happy ever after where everyone rides off with their beloved into the sunset. Here, The Swallowing is the terrible truth that real life rarely begets such endings.

House is now streaming on HBOMax, click below to watch now: