Fango unpacks (with the help of one Diana Prince) how the Mistress of the Dark sparked a sexual revolution in the genre. 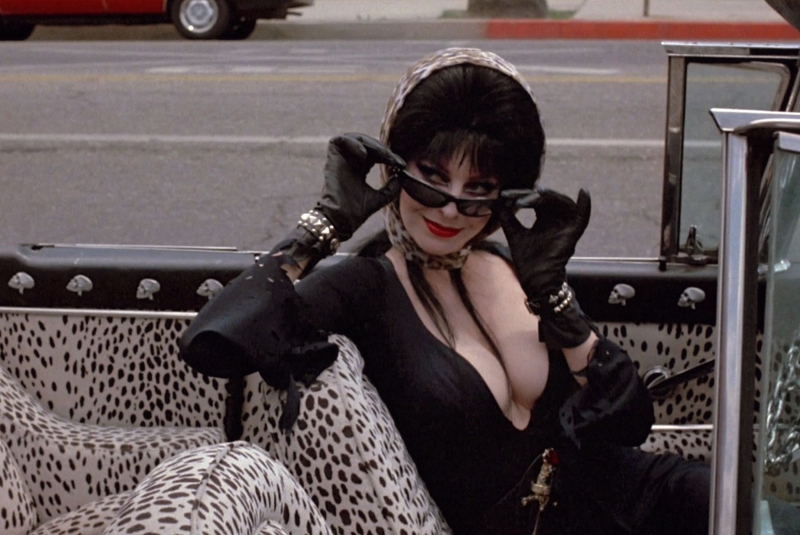 As I sit here and scroll my Instagram feed today, I'm bombarded with, not just horror-related content, but sexy horror-related content. As horror, Halloween, and everything spooky in-between has become more socially accepted, mainstream, and commercialized on the Interwebs, it inadvertently has also become…sexier to be a horror fan. Cosplays have grown in regularity at horror cons. "Sexy" Jason, Freddy, and even Michael costumes took up aisles at Spirit Halloween last month. Horror merch companies now create everything from The Craft-themed form-fitting dresses, to The Shining-patterned bikinis, to blood-splattered patterned lingerie— all aiming to make lady horror fans (or anybody) feel hot in their fandom. There's been an uptick of boudoir photography that features those in horror masks and not much else. Kylie Jenner, of all people, announced a Nightmare on Elm Street makeup "collab" with a campaign featuring her naked body and its silhouette dripping in blood. God knows sex and horror are nothing new, but I would argue that sexy horror branding, and its widespread, popularized acceptance, has become something of an upward, welcomed incline.

And there's one lady we owe it to. She spewed puns in her plunging cleavage while taking hits from judgmental critics. She eased her love and knowledge of B-horror into mainstream eyes. She aided naysayers into believing that horror wasn't just sleazy but could truly be sexy. She laughed all the way to the franchising bank and became what so many horror lovers, women-owned merchandise brands, and social media influencers attempt to do now— turn their passion for the genre into a whole brand. She walked so the rest of us could run. And that lady is Elvira. 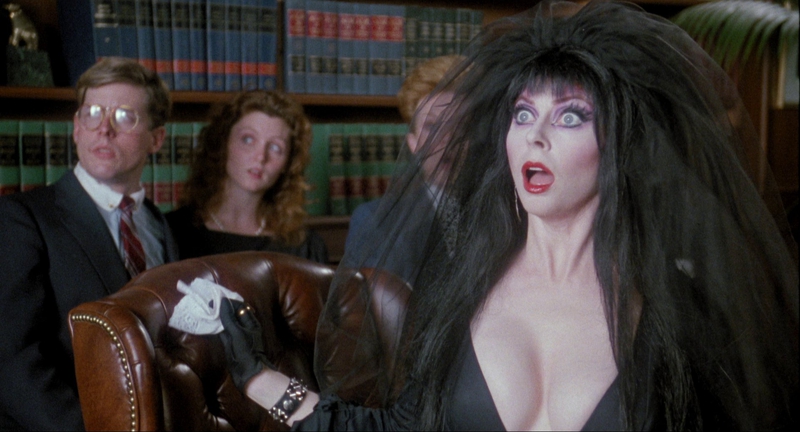 Recently, Cassandra Peterson celebrated 40 years as the Elvira brand— including the look, the films, the merchandising, the pinball machines…even housewares. She dropped her first memoir, Yours Cruelly, Elvira: Memoirs of the Mistress of the Dark, came out to the public with her longtime partner, and hosted a 40th anniversary special on Shudder that showcased her own '88 film Elvira: Mistress of the Dark, in which she's the small-town pariah bringing sex appeal and attitude to a town of prudes offended by everything from cleavage to sex-ed in classrooms. And life imitates art: few seemed to "get" the movie, and critics literally trashed both it and her (especially her) by calling her look "trashy" and claiming she was merely "stupidity with cleavage" (Brandon Judell from Popcorn Q). A critic named Alex Sandell from Juicy Cerebellum even had the audacity to tell her to "stick to hosting late-night creature features, babe." Ick. (The links seem to be gone off of Rotten Tomatoes, but the words still remain.)

So, along with the rest of the horror community that Saturday night, I re-watched Mistress of the Dark— relishing in all 96 minutes of Elvira being, well, sexy: looking like sex, joking about sex…magically transforming old prudes into face-sitting sex fiends, conveniently dropping hot dogs splayed with mustard on her chest, etc. It was long after the first time the world had seen her up close and personal, but it was perhaps the first time that she (and her charms) received such a mainstream spotlight. And perhaps, I thought, this was— not only a tangible beginning of reclaiming sexiness in horror from decades of male gawking or mere exploitative studio fodder— but the beginning of turning that sexiness into something commercially viable, and even liberating, for this relatively recent influx of genre enthusiasts that crave to show off more…passion…within their passion for horror. 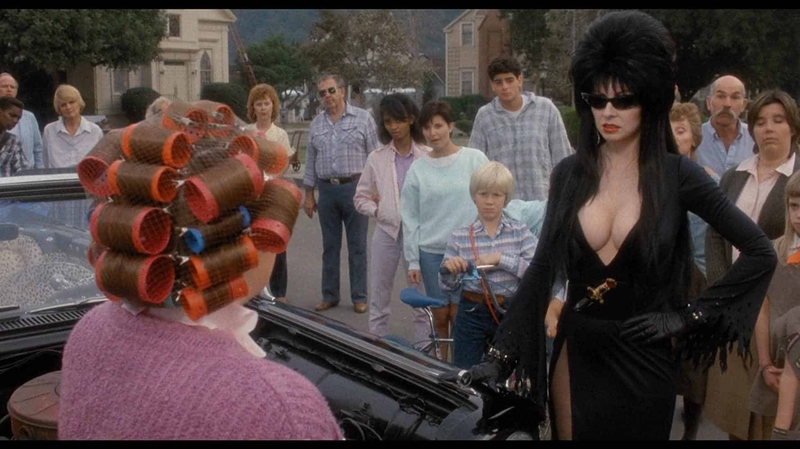 There's a certain scene in Mistress of the Dark that I'll argue serves as a meta catalyst for Elvira's passing the torch onto all of us to revel in our own sexuality. As she arrives at the rinky-dink motel in the local Podunk town she's staying in— complete with prudish owners who snark at her and her attire, dubbing her "a one-woman Sodom and Gomorrah" — Elvira meets their daughter, who they criticize for wanting to look vampish. No stranger to being judged and ridiculed for that very reason, Elvira assures the girl there's nothing wrong with wearing makeup/wanting to look more smoldering than what the local townsfolk are used to, and that she shouldn't let her puritanical parents "get (her) down."

And in reality, Elvira has continued to pass on that torch. One of the best examples of Elvira's modern disciples is Diana Prince, aka The Last Drive In's Darcy, the Mail Girl— who also turned her love for horror and movie curation into a full-blown hostess gig and a brand in its own right. "When I was asked to come up with 'Darcy's' main look on The Last Drive-In, I definitely wanted to throw a nod to the Horror Hostess with the Mostest who [had] influenced me growing up," Prince tells me. "I kept the brighter colors of a typical postal worker uniform but added a lil' goth flavor with the fishnets and dark (tight!) skirts. I also wanted to do a really contoured look with my makeup (as Elvira does), and made my hair very long and black. And, of corpse, plenty o' cleavage had to be part of that equation." 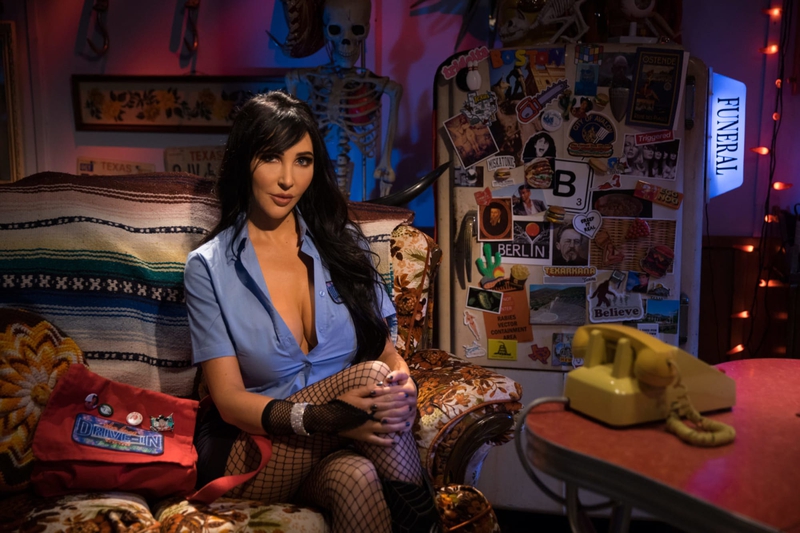 Like her hostess predecessor, Darcy (and her "plenty o' cleavage") has been merchandized into shirts, pins, and puzzles galore— looking every bit of the horror hottie/pinup part in every iteration— which is very much the beginning of any reclamation of sexy horror branding, when even the most seemingly practical, mundane of products can be a little spicier. "I remember her being everywhere [during] Halloween when I was little," Prince explains. "Costumes were sold I'd dream of getting to wear one day. She appeared in ads for snack foods and beer, and I was mesmerized by all of it. If Elvira was around, it meant it was officially Halloween time, and I'd wait anxiously for her return every year."

But the Elvira brand, and the legions of horror fans, influencers, and brands that its subcultural wake has influenced, has eclipsed well past October— it's a yearlong lifestyle for many. Elvira paved the way for the branded sexualization within the horror community that is now not only more embraced— it's rampant. And she changed the conversation from it being called "trashy" to it looking straight-up cool. For some, it's become a daily sexy posed horror-t-shirt-with-underwear-combo picture on Instagram that is met with way more "yass queens" (or whatever the kids are using now) complimentary comments and less "walking visual joke" ridiculing that Elvira received in her reviews. It's a months-long creation of a perfected horror cosplay (often of the Mistress of the Dark herself) for a series of horror conventions to travel to, as conventions have become an increasingly more welcoming space for women to feel comfortable enough to flaunt their sexy cosplays as OG horror queen Vampira, Vampirella, or even sexy versions of Pinheads or Pennywise…(name any horror icon, a horror fan can sexify it.)

"What I have noticed," Prince, who is an avid guest of several horror cons a year, tells me, "is that folks are more open to embracing sexy cosplay regardless of size, age, gender, etc. Sexy cosplay is for anyone who feels it. I love to see horror fans strutting their sexy stuff without worrying about the outdated societal conventions of who 'should' be wearing what."

It can even serve as a full-on business. Popular brands on Instagram include Videnoir Couture ("vampire creepy couture and gothic lingerie" as per its IG bio, aka total Elvira vibes), Vera's Eyecandy (which specializes in form-fitting horror dresses, crop tops, and bikinis), and Poltergeists and Paramours (which also creates horror movie-themed lingerie sets, bodysuits, swimwear, etc.). And that's only to name a few of the many options that horror lovers who want to show off some skin can choose from these days. 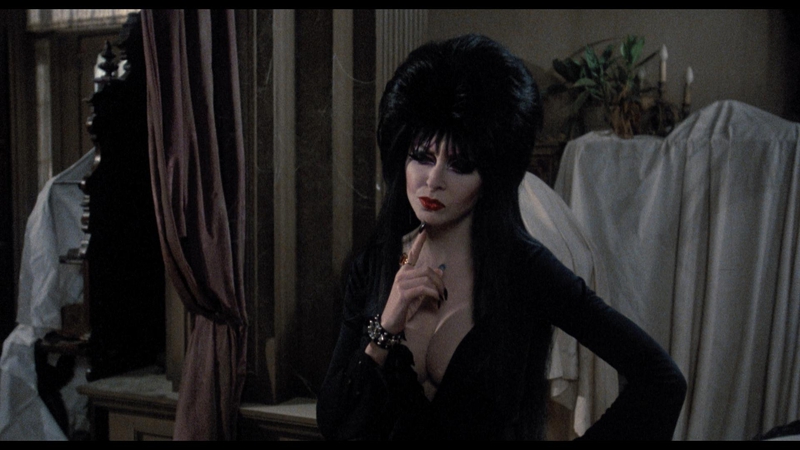 But the sexiness that our Mistress has inspired reaches far beyond hot horror clothes, precariously plunging necklines, and putting "the boob back in boob tube." Elvira is sexy because she could out-smart and out-trivia the best of the horror bros. She's self-aware and business savvy. Her comedic background catapulted her to not just horror queendom, but pun horror queendom, and her clapbacks to naysayers were legendary. That deconstruction of (a grounded, more significant) sense of sexiness is reflected in Diana's Darcy image as well, one I hope to see within the new crop of online horror hotties. Elvira's sexiness is a whole air of confidence, attitude, and persona that makes the nerdiest of any of us feel proud to be horror fans. "I think Elvira's personality combined with her image made her something unique," Prince says. "To a whole generation, she was an innovator."

As for the rest of us, how could we make ourselves and our fellow genre enthusiasts feel even sexier in our own skin? How can we better our experience with sexiness and horror in an even more impactful way? "I think we just need to always remember to be honest to who we are and what we like," Prince tells me. "You shouldn't shy away from being sexy out of fear of what others may think. Wear what YOU like, what makes YOU happy, and shows off your fandom."

"We also need to encourage each other when our fellow horror fans express themselves. It takes courage to put yourself out there like that. Let people know you appreciate their effort (in a respectful way, of corpse!) and never put anyone down for daring to show off a little. Everyone deserves to be seen and express their love of horror however they choose to."

For more Elvira, check out our interview with the Mistress of the Dark here. And for more Diana Prince, check out her monthly column, consistently delivering all the insightful horror goodness one could possibly hope for, covering everything from The Munsters to Frankenberry and beyond!