Still Not Of This World – Thirty Years Of E. Elias Merhige’s BEGOTTEN

Revisiting one of horror's most peculiar and otherworldly gems, three decades later. 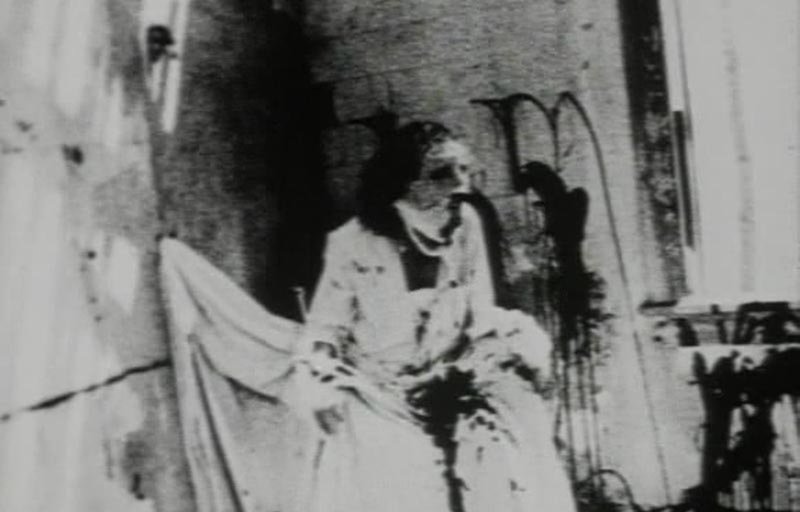 Sooner or later, teenagers interested in cinema will gravitate towards the shocking and provocative. Movies with tons of sex, tons of violence, or just the stuff that disturbs and excites in equal measure are a teenage film fan's dream. When I was a teen, there was nothing that got me curious more than finding out a movie was “banned” from a country, or seeing it appear on a “Most Disturbing” list at a horror movie site. I spent perhaps an unhealthy amount of time reading in fervent morbid curiosity about films like Cannibal Holocaust or El Topo to make up for the lack of any tapes or DVDs at my local video store. One movie, however, stood above the rest: not only in its sadistic candidness with violence and sexual material, but in its completely bizarre presentation of both. E. Elias Merhige’s Begotten would find itself at or near the top of almost every list of “Weirdest Movies” ever made and would be accompanied by a blurry disturbing black and white image of a figure covered in blood, taunting me with its frustrating visual ambiguity.

Thirty years after it was released in the Film Forum in New York City on June 5, 1991, Begotten’s impact and strangeness haven't diminished by even a slight margin. One could argue it has become even more of an alien entity in today’s landscape of Hollywood filmmaking that has all but succumbed to boring standardizations. While defying any sort of comfortable seating at a particular genre table, Begotten is more or less usually lumped in with horror cinema. Merhige mentions in his 2013 interview with FANGORIA (#326) that his filmmaking manifested in his nightmares: “I started to see dream reality and the reality of the physical world as mirrors of each other." Horror makes the most categorical sense because of the film’s shocking and bizarre visual scheme and provocative nature, but also because it’s an orphan child of cinema. The horror genre’s penchant for positioning itself as cinema’s enfant terrible clique accommodates Begotten’s outsider status nicely. If horror prides itself on honoring the filmmaking pillars of experimentation, weirdness and independent vision, Merhige’s strange little movie stands as a pinnacle of all three.

Right at the film’s opening, it assaults you visually in a way few black-and-white films ever have. Its high-contrast photography, which pulsates and bleeds into itself like an exposed wound, depicts a shed in the woods. Images collapse on top of each other in fades until, eventually, we are inside the shed and a horrifying phantom figure is perched in the corner, shaking and retching with incomprehensible pain. Blood covers its robes, splattered on the wall, a self-massacre with a razor slowly slicing into its stomach. The figure seems to be purposefully inflicting as much drawn-out pain on itself as possible… but why? This brutal depiction of character, credited by Merhige unambiguously as “God Killing Himself,” is an opening sequence that, if not as much a visual landmark as the slicing of a woman's eye in Buñuel's Un chien andalou, is certainly as wince-inducing.

Yet, Begotten as a whole is influential on many of its own terms. The phrase “ahead of its time” is thrown around a lot, but what could be a more apt description for a movie where even today people are mentally trying to process what the hell they’re witnessing while watching it? While thirty years may be enough time to relegate a healthy number of movies into forgotten territory, dismissed as kitsch and passé, we haven’t yet reached the point where Begotten can even be considered of a current moment. It has, however, inspired countless mimics in the form of found footage and music videos – the literal movie itself was used for Marilyn Manson’s album Antichrist Superstar, for which Merhige was hired to do the tour stage production. Its high-contrast, throbbing imagery, achieved through a 16mm Arri F silent film camera using black-and-white reversal film, is itself of legend – the result of an insanely laborious post-production process insisted on by Merhige.

While film critic J. Hoberman contends that the movie’s visual indecipherability is the only source of its intrigue and that its actual production locations – very mundane places in the greater New York/New Jersey area – render it “merely gross or even comical,” I would counter that the enigmatic horror that resulted from such banal origins constitutes exactly the kind of meaningful divine (or satanic) transcendence movies should aspire to. One of the purest elements of Begotten is that it was done almost completely by Merhige from scratch in a very boring and mechanical manner that nevertheless offered the filmmaker something metaphysical in its creation. Merhige says, “It was really one of these transformative, ritualistic experiences, where the experience itself became what it was about, and the film was just ancillary to the experience.” Merhige built the optical printer used to process the 16mm film himself, and the film’s rendering process infamously took nearly ten hours for each resulting minute onscreen. In his FANGORIA interview, he adds that he has “always been interested in creating imagery through analog means – it mimics the whole nature of creation itself.” As ponderous a process it might have been for us, for Merhige it was like he was giving birth to his own universe.

This universe, however, is one of cosmic horror, rivaling works of Cormac McCarthy and Alejandro Jodorowsky in its savage, untethered violence meeting spiritual beauty in equal measure. Following the suicide of God, a physical manifestation of Mother Earth gives him a hand-job and fertilizes herself with his ejaculate, thus giving birth to Son of Earth (“mankind”?) – depicted as a full-grown, naked man writhing around and being dragged by a gigantic umbilical cord across the planes of some unknown dimension. The symbolic allegory Merhige tells is not a unique one, but the way in which it appears onscreen, like some sort of demonic Rorschach test, gives the movie the feeling of what Elliott Stein accurately described as “a documentary made a few thousand years ago… buried beneath the tundra,” adding a mythical density in its ancient, decomposed, relic-like presentation.

The myths behind great movies are absolutely part of the experience of what makes them great. While "storytelling" in the Hollywood sense is overrated, movies become greater than the sum of their parts when their existence in the consciousness becomes the story itself. Begotten’s reputation precedes itself in the form of indecipherable screenshots on film websites, piquing cinema fans' interest merely from the need to know more. It’s the movie manifestation of the Black Obelisk from 2001: A Space Odyssey, and the cinephiles are the apes jumping around, mesmerized by its enigma. Begotten may be one of horror cinema’s greatest examples of the mythical movie – one which has earned its reputation as an endlessly provocative and mystifying experience always centuries ahead of the rest of American cinema, even when it looks like it appeared on Earth thousands of years ago.