Coming Home For The Horror-Days: Celebrating 15 Years Of BLACK CHRISTMAS (2006) 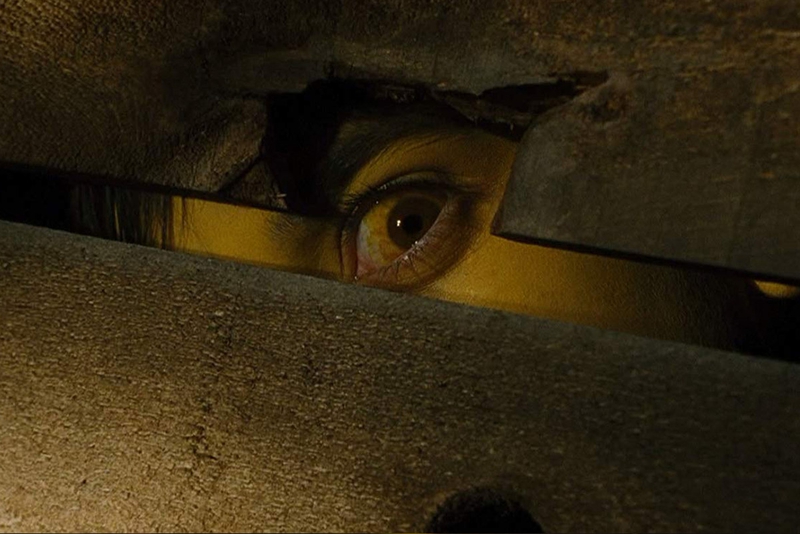 Released on Christmas Day 2006, Glen Morgan's Black Christmas (or Black X-Mas as all the cool kids like to call it due to the film's marketing materials) is a gory and grotesquely twisted update on Bob Clark's 1974 chiller of the same name. While I won't pretend that Morgan's confrontational and sometimes abrasive remake holds a candle filmmaking-wise to Clark's original Black Christmas, which might be the finest horror movie to come out of Canada, that doesn't mean that Morgan's own twisted tale of terror that came along more than 30 years later than its predecessor should be outwardly dismissed either.

In fact, when you separate the two films and judge Black Christmas (2006) by its own merits, it's a gleefully icky holiday horror romp that pushes all the right buttons (for this writer at least). Its ghoulish sensibilities and darkly comedic undertones elevate Morgan's utterly depraved take on the character of Billy Lenz (and the mysterious Agnes) in some wonderfully weird new directions. Plus, it also happens to have some tie-ins to one of the best episodes of The X-Files ever (more on that later), and Mary Elizabeth Winstead plays a character with my name too, which has made Black Christmas (2006) an essential viewing selection in my household each and every holiday season.

When it comes to remakes, what I tend to look for when it comes to these new iterations is that I want something that pays tribute to the original film but also finds a way to blaze its own storytelling trail. And even if you're not a Black Christmas (2006) fan, you can't argue that Morgan doesn't achieve all of that here with his bold reinterpretation of the material that Bob Clark first introduced movie fans to back in 1974 (which had been written by Roy Moore). I think in the case of Black X-Mas, it also helped that I hadn't seen the original movie before seeing Morgan's remake (for some reason, I didn't get a chance to catch up with it until about a decade ago), so I was the perfect blank slate.

Even though Morgan mixes things up a great deal in Black Christmas (2006), there's still quite a bit that feels in line with what Clark created in the original movie decades prior. The set-up is similar, of course: a group of sorority sisters is being harassed by threatening phone calls at Christmastime, unaware that the perpetrator is amongst them, hiding inside their vacuous residence. There's also a wintry backdrop in both movies that helps sell the characters' isolation in their predicament, and both Black Christmases are dripping with a holiday-infused atmosphere that makes for the perfect juxtaposition between the merry and the macabre. Oh, and Andrea Martin, who plays Phyl in Bob Clark's Black Christmas, returns to take on the role of beloved house mother Mrs. Mac for the remake, which is a fun touch.

Beyond that though, Black Christmas (2006) veers off and takes a decidedly left turn into some rather unsavory territory by focusing much of its narrative on the backstory of Billy Lenz (played by Robert Mann), a troubled young man who was born with jaundice and suffered an onslaught of abusive treatment from his mother Constance (Karin Konoval) throughout childhood. And as if that wasn't bad enough, after Billy sees his mom and her lover murder his father, Constance decides to lock her son away, eventually deciding in her quest to have another baby that Billy should "do the honors" (so to speak). When he finally gets tired of his sister/daughter Agnes hogging all of his dear old mom's attention, Billy loses it, killing his mom and her lover, gouges out Agnes' eye in rage, and whips up a batch of flesh cookies to enjoy before the cops show up to take him away. And it's on this particular Christmas that Billy ends up breaking out of a mental asylum and decides to head back to where it all began, as a means of taking back his home, once and for all. This time, he's got some help - little sister/daughter Agnes (Dean Friss), who is looking to do a bit of ocular damage to some unsuspecting co-eds.

Before we move on to a few of the other differences, let's focus on the word "home" for a moment. That brings us to The X-Files. If you were/are a fan of the sci-fi procedural then you're probably familiar with the series' most infamous episode entitled "Home," which focused on the inbred Peacock family that wreaks havoc on the sleepy town of Home, Pennsylvania after one of their deformed progeny is discovered in a shallow grave. It was an episode that shocked viewers' sensibilities at the time (this was 25 years ago, after all) and for years, FX wouldn't even include "Home" in The X-Files syndicated run. But in terms of connective tissue between Black Christmas (2006) and this episode of The X-Files, there are certainly a handful of direct and indirect links between the two.

First and foremost, there's Glen Morgan, director of Black Christmas and one of the most celebrated contributors to the world of The X-Files. As an X-Phile, Morgan's episodes were usually amongst my favorites from the series, and "Home" marked the return to The X-Files for both Morgan and James Wong (who also produced Black X-Mas alongside his creative partner Morgan) after they left the show at the end of the second season. Because I hadn't seen the original Black Christmas when I saw Morgan's version in 2006, all the connections that my mind made at the time were X-Files-related, which may have contributed to my initial enjoyment of the remake. 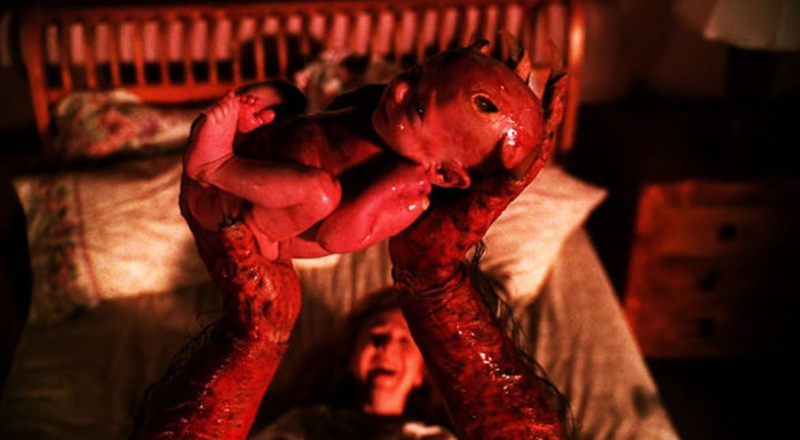 Another fun connection between "Home" and Black X-Mas is that both feature downright unsettling performances from Karin Konoval. Konoval played protective matriarch Mrs. Peacock, in the episode and then decided to reteam with Morgan for yet another monstrous mother role in his remake nearly a decade later (fun fact: Konoval also played Maurice in the recent Planet of the Apes trilogy). Both projects also deconstruct the idea of the traditional American family and utilize the concepts of genetic defects and inbreeding to disconcerting effect. Neither project was afraid to let things get a little messy in terms of the violence depicted on screen.

But for as much as I adore the connections between Black Christmas (2006) and "Home," I will admit that Morgan's reshifting the narrative to focus more on the story of Billy and Agnes Lenz, comes at a price. It nearly takes away any kind of real characterization for the sisters of Delta Alpha Kappa, and considering the cast assembled here, that's a damned shame. How do you have a movie with the aforementioned Winstead as well as Katie Cassidy, Michelle Trachtenberg, Lacey Chabert, Oliver Hudson, and even Kristin Cloke (who also appeared in an excellent episode of The X-Files and married Morgan in 1998) and not give them more to do? The cast of Black X-Mas really seems like they are game for anything here, though, especially Cassidy. The ensemble does their best to elevate the material they have to work with, giving us performances that are still ridiculously watchable. 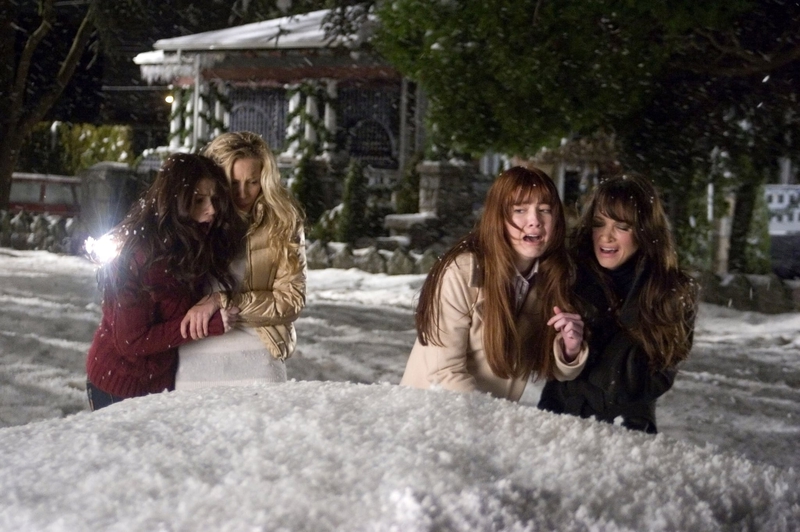 It's been reported that Morgan faced a lot of production woes on Black Christmas (2006), and when you consider the producers he was working with here (Bob and - ugh - Harvey Weinstein, who were historically meddlesome in nearly every film they produced), I think the fact that the remake ended up being as delightfully demented and entertaining as it is, is something of a minor miracle. Plus, that final sequence in Black X-Mas that has Cassidy's character Kelli tossing Billy (who looks a bit like a yellow-hued Shrek, admittedly) down a stairwell, leaving him impaled on a Christmas tree, is just so damn good that I can't help but be charmed by this wicked little gem of aughts horror. Plus, the direct nod to Bob Clark with the use of a leg lamp from A Christmas Story in the Delta Alpha Kappa living room is just chef's kiss. 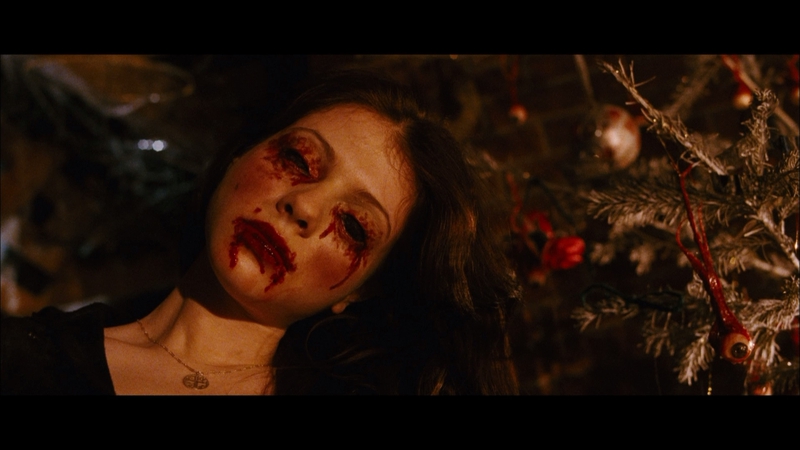 While I'd never be so bold as to say that Black Christmas (2006) is on the same storytelling level as its predecessor, the remake is still a ton of nasty fun, and it deserves more love than it has received over the last 15 years since it was first released. After all, nothing says the holiday season quite like munching on flesh cookies, numerous eyeball extractions, and a blood-soaked family reunion that turns into a murderous rampage. 'Tis the season for terror, indeed!