CALIGULA Is Back! (Exclusive)

A new book and restoration by Century Guild returns one of Hollywood’s most notorious movies to the collective consciousness. 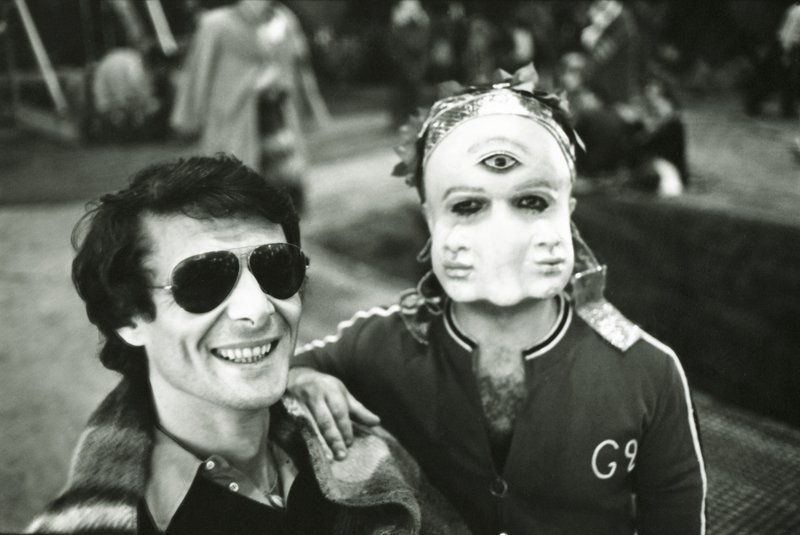 In recent years, film culture in America has increasingly become self-reflective. Many filmmakers and storytellers are looking back at the history and cultural touchstones of movies. Restoration efforts are also seeing an uptick with movies like Orson Welles’ The Other Side of the Wind and George A. Romero’s The Amusement Park receiving new releases after being supposedly lost and buried in the sands of history. To add to the great news of old movies coming back in new forms, one of the 1970s' most controversial works, Caligula, is seeing a brand new hardcover tabletop book and a film restoration over the next year.

Brought forth by artist and historian Thomas Negovan’s Century Guild in conjunction with famed experimental filmmaker E. Elias Merhige, Penthouse’s archives from the set of Caligula are coming back in the form of a tabletop book featuring never-before-seen set pictures and anecdotes, and a brilliant new version of the movie which follows closely with Gore Vidal’s original screenplay.

FANGORIA spoke with Thomas Negovan about his journey excavating these archives and his thoughts on the original Caligula, and what he hopes this new restoration project will do for film culture, fans of the movie, and future cinema archival work at Century Guild. Scroll on for the interview, and for exclusive images from the book, courtesy of Chandra Darling and Katherine Handler from Century Guild!

What’s your personal history with Caligula, as a work of art and as a controversial story in the history of American cinema? How does the film and its legacy speak to your interests in art and history?

I don’t inherently have a history with the film, but the last part of your question is very important. The relationship and communication between art and history is something we’ve explored a lot with Century Guild. I like to take works of art that might not have been appreciated during their time and bring them back into the light in a new time. Recently we did a wonderful book for painter Alphonse Mucha’s Le Pater which is his interpretation of The Lord’s Prayer, but with the Lord as an androgynous figure and that was, of course, in conflict with the Catholic Church and was banned in many countries.

This revival and appreciation of a controversial work is what I saw in Caligula. It originated really because I’m a huge fan of Malcolm McDowell [who plays Caligula in the film], and I mean, who isn’t? He said in an interview that the movie that was released was a complete betrayal. He said he fully stood by his performance and it was a truly great performance. Hearing that coming from an actor I admire, the original release of Caligula wasn’t something I wanted to see. But, I was intellectually curious about it as a cautionary tale to creatives and how its production and release was a complete debacle.

How much material was there to work with?

It was like the ending of Raiders of the Lost Ark – huge stacked boxes of original camera negatives, 11,000 black and white photos, 16mm footage of everything that happened behind the scenes. The photos are a source of excitement to see the interaction of what was going on behind the scenes. I knew that with this material we could find out if Malcolm was telling the truth. There was incredible acting in those reels. More interesting than the film itself, is the story of the making of the film. Honestly, looking at how it’s shaping up, I don’t think there’s a single frame from the original that is in our new version.

For legal reasons we have to say it’s the same movie… but, they very famously shot 90 hours of footage which is an absurd amount. [Director] Tinto Brass had three different cameras working at the same time. Me and Aaron Shaps poured through the takes and footage – God bless Aaron for watching all 90 hours of footage three times. He asked us if we could pay for his therapy afterwards. [Laughs]

How did E. Elias Merhige get involved?

He’s one of my best friends so when I got this gig for restoring Caligula, the first person I called was Elias. Since I trust him so much as a storyteller, he is the go-to for overseeing what’s going to come out. He’s the last word on the edit.

What was it about Gore Vidal’s script that was attractive as the basis for this restoration, over Tinto Brass’ version or even Lina Wertmuller’s original script?

Attraction for me was trying to be in service to helping the art. I think that to try and emulate Tinto Brass’ art, which was in the edit, it would be trying to emulate something so stylistic and singular. It’s such a clear personal style and I felt it would be disrespectful to try to recreate it inauthentically.

To me, the most respectful approach to this story was not to go the avant-garde cult film approach, which is what Tinto would do, but to acknowledge its incredibly powerful narrative that Gore Vidal etched out – to try not to impose any opinions beyond service to the intended story, because it’s not our art.

Bob Guccione was trying to make a spectacle but he wasn’t a storyteller. Gore Vidal was the only real storyteller out of the lot of them. In the script, Vidal has scenes which completely subvert McDowell’s Caligula character. The interpretation Vidal went with is that Caligula was not crazy – the way the eventual film portrayed him as – but was doing these sadistic and violent things as a conscious manipulation of the system. Vidal was making a political allegory.

The way that history, especially at the time of the early Roman Empire, worked, was [...] in some ways attempting to demonize what had come before. A lot of arguments can be made for historical accuracy… but then again, Guccione had a 100ft tall death machine with blades that chops people’s heads off. That type of stuff makes the original Caligula occupy a strange sci-fi version of Rome.

That’s actually one of the things I really liked about it.

Well, what makes a great film and a good piece of art? I would argue that Caligula is a trainwreck but, from the art world, it stands head and shoulders above most of the work of its era. It’s very Duchampian. It failed as a piece of film, but it succeeded because of its craziness. Like someone could complain about Duchamp’s 'Fountain' and say, 'Oh I could do that,' and it’s like, 'But you didn’t! He did!'

The 1970s to early '80s really were an era of extravagant risk-taking, a go-for-broke mentality in Hollywood motion pictures that we just don’t see anymore. Stuff like Zardoz and Heaven’s Gate and Once Upon a Time in America at the time were considered pretty crazy and controversial projects. Most of these were failures at the box office and critically panned because they were butchered by producers and censors but now, in new versions, are regarded as classics. Do you hope that Caligula can become a movie people reference to time and again without the tongue-in-cheek sarcasm?

Guccione’s release of Caligula is what it is. We’re not trying to take away from what happened but do a restoration that isn’t the skin of the film but the heart. We’re looking at what the intention of the creators [was]. If you asked anyone involved and listened to the interviews, everyone’s contradicting each other. The movie that came out was the result of these messy contradictions but enough was done right on the cutting room floor, especially with the acting, that there is a brilliant film in there that is legitimately good. But if that movie came out 40 years ago, we may not be talking about it the way we are today.

Ultimately, the thing we’re doing with the book and restoration is not just about the movie, it’s about the conversations – is there a better way we can be making movies today? Like, is anyone going to talk about the latest Marvel film 40 years after they watch it?

40 years? How about 40 minutes after they watch it?

[laughs] Yeah, look, I enjoy Marvel films and they’re entertaining, it’s just… if you try to judge Caligula as a 'film' from that studio perspective, a lot of truly creative movies like it are going to fail. Friedrich Schiller wrote once, 'It’s the artist’s job to elevate the mentality of the people. To make them meet you rather than compromise your work to meet them.'

I absolutely love that.

Oh yeah, I have that quote hanging up in my hallway. I love a lot of mainstream movies but lament that the studio system keeps hacking off the rough edges. It’s like a conveyer belt of perfectly round donuts. The interesting convos surrounding Caligula aren’t about 'is it a good movie or bad movie,' but 'how did it fail and how did it succeed?' The best part of what we’re doing is to return the movie to the consciousness of audiences but with behind-the-scenes photos that give an honorary look at the artists who worked on the movie and who wanted it to succeed.

Do you think eventually one version of the movie will rise as the 'official version' or will they – can they – each be appreciated as different evolutions of the same filmmaking process?

Can the two coexist? I say absolutely, because it’s impossible for our new version to be as spectacular in the literal sense as the original. When I saw all of the materials, I had this weird moment where it felt like I was looking at alien artifacts. I had to take this job because the world had to see this. It was a moral question. It was also curiosity. I feel like when people talk about the stories, about what happened in the makings of a particular movie, this is the closest people can get to literally being on the set. It’s the idea of it [that's] so fascinating. Hopefully all the parts work together – the old version, the new version alike, and both serve each other and create a dialogue of the film’s history.

Finally, what’s the timeline look like and what should people look forward to over the next year?

There’s going to be a push with the new film version and the documentary next year. The book is the main thing right now. The book is like me letting people into the museum of Caligula after hours. The reaction to this book will let me know if I should keep doing stuff like this with future archival material. To do a weird decadent artbook with pictures of three-eyed people and guys who have knives for penises is stuff that won’t work on the mainstream level, but it’s exciting for me as a film nerd!

Read more about the restoration project and behind-the-scenes photo book of Caligula HERE.