Love that Danhausen. Or be cursed! 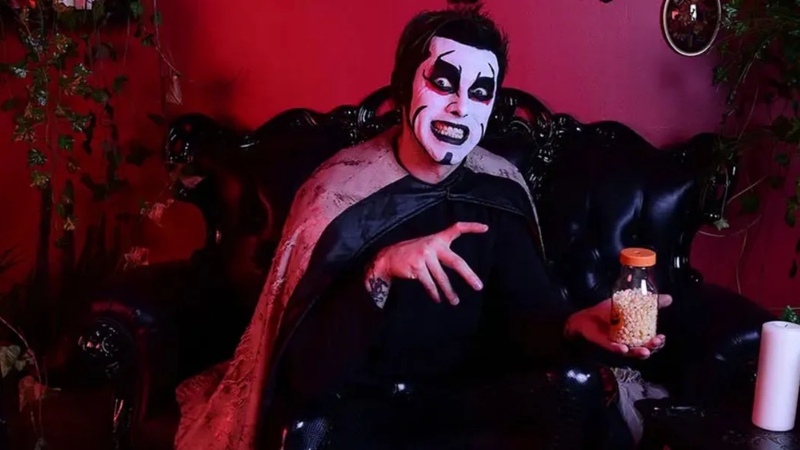 Since the advent of the moving picture, horror films have always been the quickest anthropological way to examine a culture's fears. The monsters we create are frequently born of our own anxieties–the other, the supernatural, the unstoppable, the slasher, the demon, the alien, the unknown. Comparatively, The art of professional wrestling has always been a conduit for those same anxieties. As horror movies presented vampires with impossible-to-place dialects as metaphors for our growing xenophobic fears, American professional wrestlers made heroes out of men who dared defeat the "dangerous foreigner." In a world where babyface heroes and villainous heels are exaggerated beyond measure, adopting a persona inspired by horror movies used to be a surefire way to present yourself as an intimidating presence.

Both mediums, especially during the mid-century before people widely understood their functionality, thrived on getting the right reaction and intensity out of an audience in a way that nothing else quite did at the time. Freddie Blassie would physically file his teeth into fangs to draw blood out of his opponents. As legend has it, his work was so horrific that viewers had heart attacks and even died. Whether or not we believe this to be true is a matter of opinion, much like the horror movies that frequently claimed audience members fainted, vomited, or required an ambulance after seeing their frightening new film.

The world of professional wrestling has seen its fair share of horror characters, like the deranged Mankind, The Wyatt Family cult, The Brood, the vampiric Kevin Thorn and Ariel, The worm-eating Boogeyman, the voodoo priest Papa Shango, the demon Kane, the Fiend Bray Wyatt, and of course, the Undertaker. In recent years and with the increased visibility of the independent wrestling circuit, horror wrestlers are all the rage. The Pumpkin Queen Sage Sin Supreme, the Patrick Bateman-esque Charles Mason, The Cogar Brothers, The Undead Bride Su Yung, Hollidead, the living dead girl Abadon, and the very nice, very evil, Danhausen.

The pro wrestling equivalent of Conan O'Brien possessed by a demon, Danhausen is the perfect embodiment of everything that makes horror the absolute best. Initially a far more insidious character, Danhausen crept out of the dark recesses of the internet with short horror films that fans slowly began sharing on social media. As Danhausen gained more eyes, he began incorporating non-horror elements like The Simpsons, Conan, and Space Ghost into the character. A lifelong fan of horror-comedies, Danhausen found a sense of comfortability in a horror character that transcended just "horror," and fans absolutely ate it up.

While clearly influenced by the horror comedies of the 1980s and 1990s, the look of Danhausen is deeply rooted in the classics. Growing up, Donovan Danhausen (the man behind the makeup) grew up with a father who built haunted houses and did the makeup on scare actors. Every year, his dad would do an elaborate makeup look on him for school, frequently getting him in trouble for the look being too violent. Early in his wrestling career, Danhausen would paint the cover art for Converge's "Jane Doe" album on his face, as well as the iconic look of the aliens from They Live. Unfortunately, that makeup takes hours to complete, and was not worth the hassle of being destroyed almost immediately in the ring. He needed a new face, so he looked to the classics. His wife is international burlesque star Lou Lou la Duchesse de Rière, and as part of an act for Theatre Bizarre, Donovan Danhausen did a look inspired by the flashing face of Pazuzu from The Exorcist. Not long after, Danhausen was booked to perform at the 1920s themed promotion Olde Wrestling, and decided to incorporate elements from classic horror films like The Cabinet of Dr. Caligari, London After Midnight, Phantom of the Opera, and The Man Who Laughs into the look. 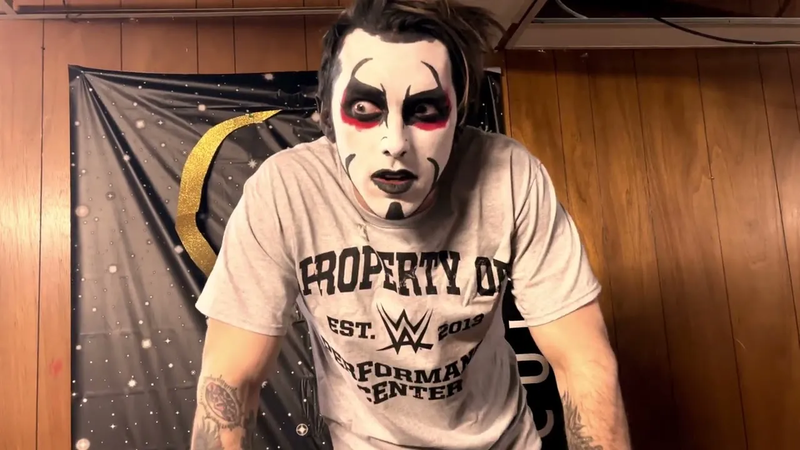 His face was perfect, the dark lines carving out his features, and it all came together when he flashed that trademark smile. "I noticed in wrestler photos, they're always angry, but traditionally in photos, you're supposed to be smiling," Donovan Danhausen tells me. "I played up the whole thing of smiling–it's fun, it's creepy, it's kind of a parody of what a wrestler is supposed to be." Despite his terrifying demeanor, Danhausen is consistently and relentlessly funny. He looks like the stuff of nightmares, but because he doesn't play by our simple human rules, it's like watching E.T. trying to make sense of the world, but if E.T. was a wrestler who detested swearing and collected human teeth in jars.

And people can't get enough of it.

Danhausen sold more t-shirts on Pro Wrestling Tees last year than any other free agent wrestler (meaning not those on cable every week through AEW), you can buy his merch at Hot Topic, he has his own brand of coffee, his own guitar pedal, and people even make high-quality toys of his likeness. Donovan Danhausen tells me that it's surreal, but it's also exactly what he was going for. "I wanted to be Krusty the Clown. There's an episode of The Simpsons where we look in Bart's room, and he has Krusty everything, even the most ridiculous stuff…I wanted to be that, but realistic." Just this week, Danhausen was hired at A&W after tweeting his application featuring skills like "hypnotizing," being "very strong," and listing his references as his "good friend" CM Punk and his strength coach "Billy Ass." (He's referring to wrestler Billy Gunn… it's a long story.)

The same way wrestlers of yesteryear reflected the horror culture of the time, Danhausen is the perfect horror character for the now. He proves that you don't need a huge studio budget or 3,000 screens to be the best thing in the game, you just need creativity, ingenuity, and a rabid fanbase. Danhausen is the personification of films like Psycho Goreman, where the humor lies in the sincerity without punching down, and where the horror feels so fresh and exciting, people can't shut up about it. The way horror fans scream in all caps on Twitter for that new movie "you gotta see," wrestling fans the world over chant and cheer "LOVE THAT DANHAUSEN!" He's horror and wrestling at its best, leading with encouragement in spite of a spooky demeanor, and having so much fun with it all you can't help but smile.

Similar to how the hockey mask has transcended the world of hockey and is more immediately associated with Jason Voorhees, Danhausen's look and antics have transcended the world of sports entertainment. He's bigger than wrestling, he's a bonafide cultural phenomenon, and it's all because he's a menacing, laughing, horror show. I was lucky enough to talk with Danhausen, who has dreamed of being in FANGORIA, prioritizing it above "The Dwayne" and just below Elvira (honestly, fair). "Put Danhausen on the cover. Put Danhausen in the, what is it? The middle, the spreadsheet, or whatever it's called... pictorial, that will make it nicer. That's for sure." If he had his way, Danhausen would share a cover with Elvira or Bruce Campbell, both icons who have already proven to be very nice and very evil. I wanted horror fans to fall in love with Danhausen the way so many wrestling fans already have, and the easiest way to do that was to let Danhausen be, well, Danhausen. 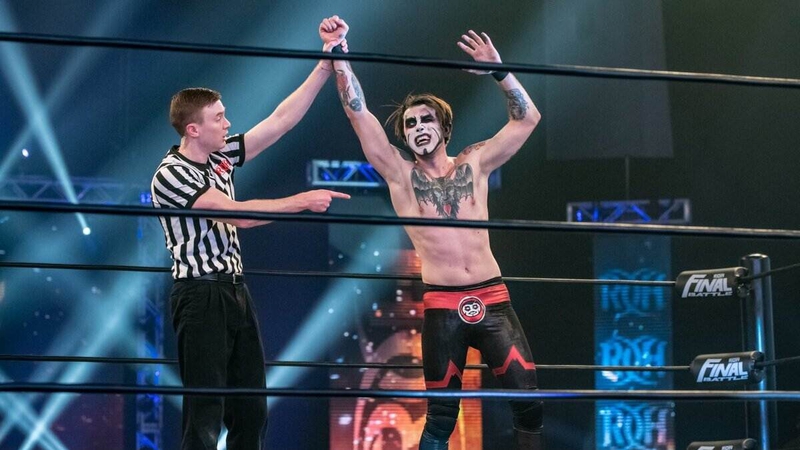 If you could ask Elvira anything, what would you ask her?

How can you be such an icon for so long? How do you keep it up? How can we do this? Also, where do you get those dresses? They must be custom-made because they are quite nice. And Danhausen needs one.

I just had a visual of you wearing the Elvira breast plate, and I think I just broke my brain.

It will look quite wonderful.

Do you think Danhausen could pull off like the beehive hair?

Oh, definitely, yes. Danhausen pulls off a mullet quite well, if you've seen recently. You can probably do that, Elvira hair as well.

Have you ever wanted to hang out with any monsters?

Oh, let's see. Probably not a werewolf, it would be quite terrible. Oh! A mummy! Because if they try to attack you, they're quite slow…also, Brendan Fraser is probably near. He seems quite nice.

Have you seen any movies lately?

Yes. What did we see? Danhausen saw... I guess this would not be lately, but Danhausen saw The Matrix, saw Spider-Man, and what did we see before that? What was it, Lamb? Saw Lamb. The ending was quite jarring, I suppose, but too long. What else? Candyman was good. Also underrated. Everyone should go see it.

Did you see Malignant?

Suppose it was quite... It was a fun, bad time. Was it on purpose? That's what Danhausen really wants to know.

My last question, what do you want the readers of FANGORIA to know about Danhausen?

Well, Danhausen's popping up everywhere, as you know, because we are FANGORIA right now. He shall take over the world in 2022. Should get back on television, and you must help by watching and telling people to love that Danhausen. Or be cursed! Put that in there. Tell them they'll be cursed. People don't like to be threatened with cursing.

I will make sure that I do that, for sure.

It's like those old emails that would get sent to you and say, "Send these to 10 people, otherwise you will have ten years of bad luck." That's where Danhausen got the idea of cursing people.