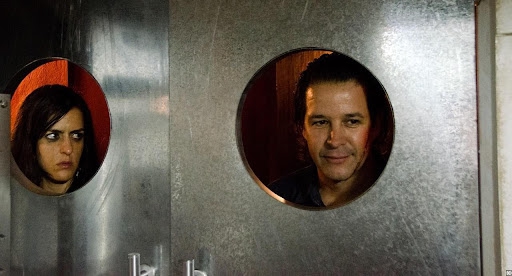 I try to be objective, I really do. But we have, in this case, a total failure of professionalism; I just adore this movie, and I come close to physically shaking with anger that it's not better known. Friendly Beast was the debut feature of Brazilian filmmaker Gabriela Amaral. The movie was made in Portuguese, over the course of twenty days. It simply beats most other films made with bigger budgets by bigger names with bigger production schedules by galaxies. It's a super tight screenplay, elegantly simple in its setup and production design, perfectly cast, and has the ideal balance of unrestrained viciousness and genuine hope that I honestly feel lies at the heart of the most classic horror films.

The writing is probably worth a mention here; Amaral began her career as a screenwriter well over a decade before she released this, her feature debut, with a number of shorts to her name as director also. And it's certainly not a case that all her collaborators on Friendly Beast were new to their particular roles; of specific note here is the esteemed Uruguayan-Argentine cinematographer Bárbara Álvarez, whose most famous film amongst her impressive filmography is perhaps Juan Pablo Rebella and Pablo Stoll's Uruguayan film Whisky, which won both the FIPRESCI Award and the Un Certain Regard category at Cannes in 2004. Amaral might be better known for her sophomore feature, 2018's The Father's Shadow, which is also very good, but Friendly Beast? It's just a knockout.

Friendly Beast takes place in one night at a restaurant. It's near closing, and the staff want to go home, but a regular customer is taking his time. There's a clear hierarchy amongst the staff from the outset; the manager Inácio (Murilo Benício) is at the top, and in a clear power struggle with the chef Djair (Irandhir Santos), the latter of whom fiercely protects the rights of his fellow kitchen staff. In between is waitress Sara (Luciana Paes), who largely acts as a kind of human mediator between the restaurant's managerial domain and the 'back end' of the kitchen. The arrival of a second couple - rich, drunk, rude - throws the plans to shut down on time into chaos, and when the already tense environment is escalated by a violent attempted robbery, the barely repressed vendettas and class-fuelled loathing between our ensemble cast bubble almost instantly to the surface. 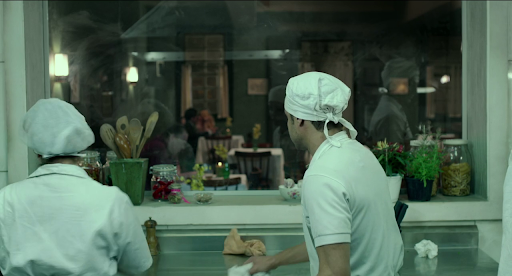 This explodes in violence before we even have time to really grasp the sudden change in tone; most specifically, an act of sexual violence that is very brief and clearly designed in terms of the explicitness of how the act is represented; is nevertheless shocking. And I don't say that lightly; it's really distressing. With all of this happening only in the film's opening moments, the bulk of the movie plays out then as a fairly undisguised microcosm of Brazilian society that I would suggest has undeniable universal relevance. It's a film about little men wanting to be big men and the lengths they will go to do so. But it is also fearless in its brutal takedown of classism, sexism, and homophobia. What starts as passive, socially acceptable cruelty in one night rapidly evolves into outright sadism, torture, and murder. 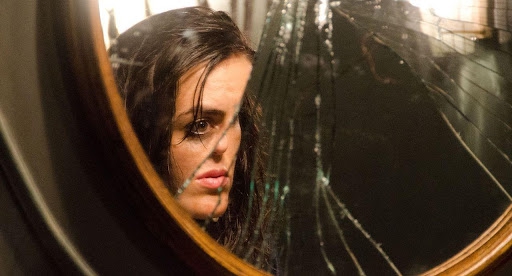 With Amaral so clearly focused on the different kinds of men in the film and how their diverse ethics play out in this relatively simple, straightforward narrative scenario, it is worth emphasizing that one of the strengths of the film is its refusal to naively opt for a shallow 'girl power' cliche of women and solidarity. Friendly Beast is an attack on toxic femininity as much as it is toxic masculinity - really, it's about toxic humanity, although that is framed quite determinedly through a gender political lens.

In Friendly Beast, stereotypes are rendered not just horrific but actively grotesque, its players collapsing under the very weight of expectation - the pressure to perform these roles and keep smiling simply falls away in a traumatic situation. Amaral is not shy of using mirrors as a metaphor to heighten our awareness of duplicitous personalities. She also uses space in an almost theatrical way to mark out different zones of interpersonal politics, be it between strangers or long-time work colleagues. While there are two brief external shots and one particularly powerful scene in a bathroom, the bulk of the film takes place in three spaces: the front of the restaurant itself where diners indulge and are catered to, the kitchen, and the corridor in between, a space where the roles adopted in the former two can sometimes transform quite radically. 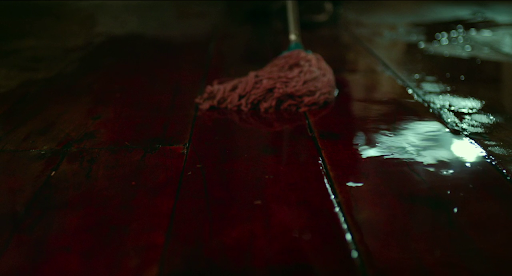 However, at the heart of Friendly Beast lies a fundamental sense of hope that stops this being misery porn. The film is fun, don't get me wrong: Sex! Violence! Cleaning up blood with a mop! But without the core sense of hope that is so fundamental to the movie, Friendly Beast would lose its punch. It would, in many senses, have been an easier film to sell without it, to simply indulge in the gleeful visceral muck in which Amaral is so clearly at home. But this thread of hope - as delicate as it is - is what turns this gorefest into something altogether more thoughtful, profound, and essential.