Hold onto your butts. 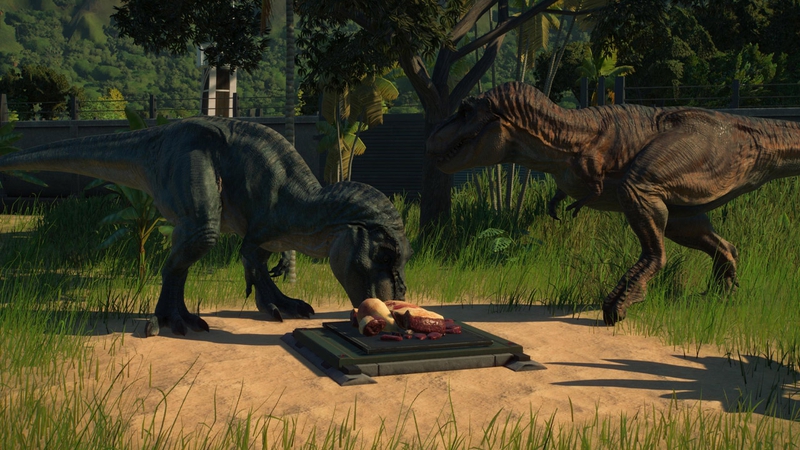 As expected, many, many people showed up at the theater over the weekend for Jurassic World Dominion, handing Universal their biggest weekend since... well, the previous entry (2018's Fallen Kingdom). And with an A- Cinemascore, it seems like many of those folks were satisfied with what they saw, which is always nice when you consider how much a family trip to the movies can cost. Alas, I wasn't one of those satisfied customers; as has been the case with every other Jurassic sequel (this being the fifth, for those not keeping count) I walked out thinking it was fine, even fun at times, but nowhere near the level of triple A blockbuster quality that the original delivered in 1993.

And yes, that includes 1997's Lost World, so I can't even point the finger at Colin Trevorrow or whoever because Steven Spielberg himself failed to win me over with his sequel. I consider the original film to be close to the ideal blueprint for what a big summer movie should be: fun, unique in some way, eye-catching, etc. And I was 13 when it came out, an age where I had already begun to refine my taste in "cinema" a bit, so I know my love isn't (entirely) built on nostalgia as I was a few years past that kind of blindness. If it came out when I was 9, maybe my love for Jurassic Park could be equated to my passionate/ oft-mocked defense of the likes of Shocker and Friday the 13th Part VIII, but no. Whatever nitpicks you want to level at the first film, you can't deny that it's a legitimately great popcorn film.

Because of that love, I keep going back for the sequels, hoping someone, ANYONE, can find a way to get me even close to as engaged by this world as I was in 1993. But as it turns out, the only person who can do that is... me?

OK, technically, the person is Rich Newbold, the director of Frontier Developments' Jurassic World Evolution 2, which was released late last year and has expanded to include material from Dominion. In the game (a sequel to the company's 2018 release), players are tasked with running their own dino theme parks in various areas worldwide, some of which are based on concepts from the films. Remember the San Diego joint that Hammond's nephew tried to open at the end of the second film? You are handed the remains of that partially destroyed park, assigned to fix it up and finally get it up and running. How about the overrun Site B from Lost World and JP3? You are sent there to corral the loose dinos, get them fed and healed up, then send them off to fulfill their destiny as attractions at this or that park. 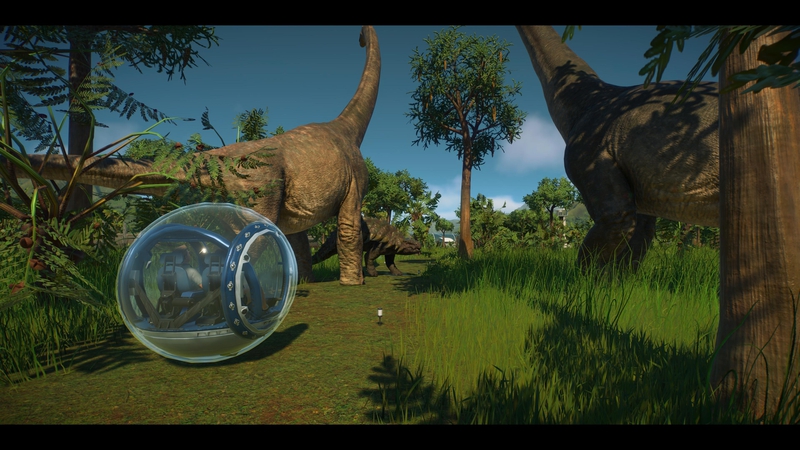 But as we learned in Jurassic World, people get bored with dinos, and you need to constantly add new attractions to keep the dollars coming. That's where expeditions and research come in: you send out teams to dig sites around the globe in order to find fossils from which the DNA can be extracted to make new species, and by keeping other teams focused on research, you're able to unlock new skins, gain access to modifiable traits, etc. Want to make a brachiosaur that gets angry and attacks, or a raptor that's as docile as a puppy? You can do that, provided you've invested enough into genetic research and kept your employees from getting disgruntled by giving them breaks and periodic raises. And while they're doing that, you can check up on your food stands and gift shops, ensuring they're as profitable as possible. Guests getting bored? Add a gyrosphere tour, and don't forget to add photo stops and the iconic Jurassic Park gate for them to pass through along the way.

The game offers many modes with various challenges or handicaps built in. In one scenario, you're not allowed to have any carnivores - think you can get max profits from a park without a T-Rex or Raptors to entice ticket buyers? The one that has truly kept me playing the game for as many months as I have now is the sandbox mode, where you work with an unlimited budget and everything unlocked to build the park of your dreams, with zero restrictions or failures to worry about. One of the more challenging things to manage in the proper game is giving all the dinos the space and types of food that they want to keep them comfortable (if they're not comfortable, they'll repeatedly break out of their pens and wreak havoc, which understandably drives profits down), but in sandbox mode, you can turn all that stuff off and - in the words of Ellie Sattler - do things because they look good. Or you can leave fences out entirely and let the dinos chomp on anyone stupid enough to come to your clearly dangerous park, something that's worth trying just to enjoy the surprisingly detailed animation of those inevitable human buffets.

Some players have painstakingly recreated the two parks from the films, and it's remarkable how close to accurate they can be, thanks to the many customization options the game offers. There's even a little hut-style bathroom like the one that Gennaro ran to in the first film. The first game lacked the aviaries and lagoons that were so big in Jurassic World, and it's clear that the team for the sequel spared no expense (sorry, not sorry) in making sure that if you saw it in one of the first five movies, you could put it in your park here (except for Jimmy Buffett). A robust terraforming system allows you to make those hills and valleys just like the one Grant and the kids had to traverse to get back to the welcome center. You can use trees to section off things like the necessary control buildings that guests probably wouldn't want to see. 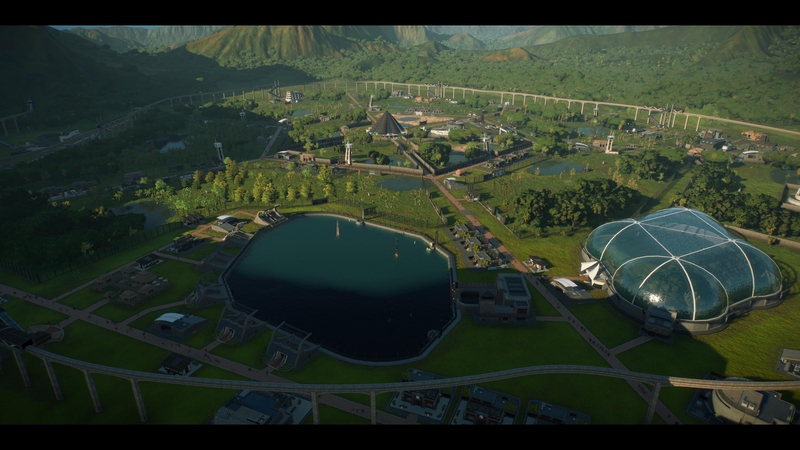 Now, I'm not much of a simulation player, finding them too frustrating or slow to keep my attention past the tutorial (if that), but this one - based mainly on films I don't like very much! - has consumed me. If not for Elden Ring, I'd estimate that I've spent more time on this game than all the others I've played over the past six months combined. I've earned nearly every Trophy, unlocked the entire in-game "encyclopedia" (little wiki-style entries about each character, dinosaur, location, etc.), and built several of my own parks, including the mega Jurassic World pictured above. I've spent hours just fine-tuning the pathways and monorail tracks for maximum aesthetic appeal, tearing down and rebuilding gift shops to accommodate fountains or fossil displays next to them, and terraforming the individual dinosaur displays so that the parkgoers have the best possible views from the galleries. And despite not loving the movie, I'm arranging my schedule this week to make sure I have time for the Dominion-themed DLC, which will certainly add new elements that I'll go back and add to my other custom parks. And/or just build a new one entirely.

Once I finished everything, I found it to be an oddly relaxing game to return to. Sure, it gets stressful at times (the programmers love to send damaging storms your way at the worst possible moment), but that aside, I can check in on my parks when I have a few minutes of downtime, tinkering with gift shops or paths to improve things for my virtual guests (you're also able to tour the park in first person if you wish). Once you hit a five-star rating, there's little reason to continue working there, but I will happily load up one of those finished areas and check on everything. Dinos can get sick or injured and require treatment, sometimes they die of old age and need to be removed before the rotting corpse infects the food supply, and even the various park rangers/medics need to have their gas and food supply refilled every now and then - these are all things I'm shockingly committed to taking care of even though I know I can just leave them in limbo forever. The iconic theme music kicks in at appropriate times, the characters from the movies chime in to give you assignments or comment on your progress (most of them played by the actors from the films, though Chris Pratt is a noticeable holdout), and thanks to the abilities of the current-gen systems (I play on PS5 myself) the dinos look and move exactly like their big-screen counterparts. It's as legit of an experience as any of the feature films.

But you know what it DOESN'T have? Locusts. Endless rehashed sequences from the first film. The Kirbys. Colin Trevorrow's seeming inability to track a plot point from one scene to the next. The things that made all of the sequels feel "less than" are all absent here, leaving only the dream that propelled the first film (and the best part of Jurassic World): a fully operational park where you can grab a burger, buy a T-shirt, and then ride a tour Jeep past a herd of Triceratops. It took almost thirty years, but I finally have something else besides the first movie (and book) that I truly love. Thanks for figuring it out, Frontier!