Why do so many iconic chilling adversaries get turned into cozily familiar protagonists? 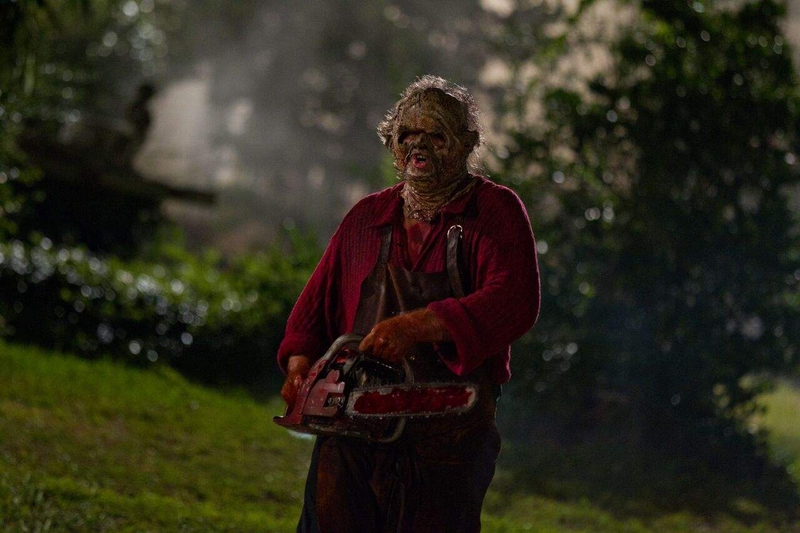 If you're watching the trailer for Don't Breathe 2 without any knowledge of the preceding film, it might just look like a routine feature. Stephen Lang's The Blind Man is taking care of some little girl when a collection of bad people shows up at their home and kidnaps the youngster. Now it's up to The Blind Man to take down the kidnappers in creepy ways and save the surrogate daughter figure in his life. A Taken-esque project with more scares in its marketing, after all, this does hail from producer Fede Álvarez, the director behind the 2013 Evil Dead film.

But if you're aware of the original Don't Breathe project, then the trailer for this sequel may be downright baffling. In the first film, The Blind Man was explicitly the villain, a man who kidnapped the woman responsible for killing his daughter in a car crash. He impregnated this character against her will to create a "replacement" for his deceased daughter. Naturally, the audience is supposed to root for Don't Breathe protagonist Roxy (Jane Levy) to escape the clutches of The Blind Man and beat him senseless.

The trailer for Don't Breathe 2, though, presents a drastically different dynamic in which The Blind Man is now the focal point of the story. Not only that but, per this trailer, The Blind Man is potentially somebody the viewer is supposed to root for as he viciously takes down the people who've kidnapped a young girl that serves as his new pseudo-daughter. It's a massive change of pace from the original Don't Breathe, but watching this trailer, I was struck by how it didn't seem totally new. After all, the history of horror cinema is full of characters who morph from antagonist to protagonist in subsequent adventures. The Blind Man is not an anomaly, far from it.

Now, pop culture is full of villains who eventually find themselves in the spotlight rather than shrouded in the shadows. Everyone from Kylo Ren in Star Wars to Kyle Murray in Degrassi has gone through the foe arc to more trustworthy lead characters. But what makes this trend in horror movies especially fascinating is how these villains start as ruthless characters. By nature, the antagonist in a film meant to frighten the viewer; these adversarial figures commit horrible acts of violence, abuse, all kinds of nastiness. Yet, it doesn't take long for sequels to turn characters once meant to inspire fear into ones that inspire cheers.

What inspires this trend? Well, part of it comes down to marketing impulses. Horror film antagonists usually end up becoming the most merchandise-friendly figures in their respective franchises. Laurie Strode was the objective protagonist of Halloween, but she wasn't the one that got turned into Halloween-themed costumes and toys. Let's also not forget the titular alien adversary from the original Predator may have been a monstrous foe, but it was also a monstrous foe with a mug ready to slap on any number of toys. Thus, once Alien vs. Predator rolled around, the Predator was an ally to the human race rather than an otherworldly slasher movie villain.

However, the constant shift on the part of film producers to transform horror baddies into protagonists is primarily emblematic of priorities in Hollywood that are scarier than any slasher villain. The omnipresence of this trend reflects the perspective over who gets favorability in headlining major motion pictures. The shift to focusing horror sequels on villains largely means that female protagonists are eschewed in favor of leading men. Just as women are largely seen as unviable to headline wide release films, so too in mainstream horror sequels is there a tendency to view the male serial killer as more compelling than the Final Girl.

Just look at how Hannibal Lecter was seen as such a hot commodity that the movie Hannibal couldn't lose Hopkins, but it was more than willing to let original Clarice Sterling actor, Jodie Foster, go. Similarly, Don't Breathe 2 jettisons the original film's protagonist, single mother Roxy, to focus exclusively on The Blind Man. These films are not the exception but rather the rule. The further exploits of Alice from Friday the 13th and Sally Hardesty from The Texas Chain Saw Massacre have also gone unexplored, while other sequels in their respective franchises shifted the spotlight exclusively onto their slasher counterparts.

It's a trend that reminds one of the opening of the 2018 Halloween movie when a pair of podcasters are more obsessed with tapping into the psyche of Michael Myers and understanding his motivations more than seeing Laurie Strode (Jamie Lee Curtis) as a person. On the contrary, their language in discussions with Strode even tries to shift the blame onto her. They're trying to turn a monster into a human being while also turning an actual person riddled with trauma into a monster.

Exploring the further exploits of women and other figures that make it to the end credits of a horror movie would inevitably include examining what it means psychologically to survive all that turmoil. Many horror sequels avoid that potentially difficult narrative path in favor of just bringing back evildoers as protagonists the audience can root for. What makes for a less daunting sequel to write, also helps to perpetuate the arcane notions of who is valuable as a protagonist in the landscape of mainstream Hollywood projects.

Even beyond contributing to harmful trends in the larger domain of pop culture, twisting horror villains in this manner can also lead to strange evolutions of classic horror movies. Just look at one of the most baffling examples of this trend, which appears in Texas Chainsaw 3D. The sixth theatrical feature based around the world of Leatherface is initially business as usual. A masked chainsaw-wielding killer residing in Texas slices up youngsters, all sorts of carnage, filmed explicitly to make use of digital 3D technology.

By the end, something unexpected happens. Protagonist Heather Miller (Alexandra Daddario) learns that Leatherface is her cousin. Not only that, but per the wishes of her deceased grandmother, she's supposed to take care of this lumbering murderer. Suddenly, Miller develops a softness for the murderous maniac, with her own personality and motivations going out the window so that she can revolve her world around Leatherface. With the agency of its female lead erased, the audience is now supposed to cheer as she rescues Leatherface from the clutches of an evil deputy played by Scott Eastwood and then encourages him to go on a rampage.

While Texas Chainsaw 3D doesn't go so far as framing Leather as a straight-up "hero" here, it does sand off his edges to turn the longstanding horror character into something far more contained, understandable, and even approachable. What a way to undermine one of the core foundations of Tobe Hooper's original masterpiece, all while showing a disregard for the individual perspectives of women to boot.

An even more famous example of this phenomenon is what happened with Freddy Krueger. Originally conceived as a child molester enacting revenge on the now-teenagers who had previously revealed his horrific acts (a backstory altered for the final cut of the original film), Krueger certainly doesn't sound like the kind of character who would become a protagonist. But audiences grew to enjoy Krueger and his darkly comical one-liners so much that sequels in this franchise began to embrace him, rather than the teens he was tormenting, as the focal point of subsequent stories.

A 1988 Fangoria article covering the fourth Nightmare on Elm Street production even referenced this transition by noting how the third entry in the saga had turned Krueger into more of an entertaining figure rather than a terrifying one. Krueger actor Robert Englund even noted that the once-petrifying series had "almost become family films" thanks to the direction taken with the character. Now that audiences knew what Krueger was capable of, he became someone viewers rooted for to dish out uncontrollable mayhem.

Hannibal Lecter also fell prey to this, originally a terrifying figure in Silence of the Lambs even before he got loose and started gobbling up people's innards. Anthony Hopkins' turn as the character won an Oscar, ensured that nobody could mention "fava beans" without evoking Lambs ever again and solidified Lecter as the next horror figure to go through this transformation.

As indicated by the title, Hannibal shifted the focus from Clarice Sterling to the cannibalistic psychiatrist himself. 2007's Hannibal Rising took things one step further by turning Hannibal Lecter into a tortured antihero whose cannibal tendencies tied into the torment he endured in his younger years. Once again, a chilling horror villain had become another standard protagonist, complete with a tidy backstory to explain the inexplicable.

The constant desire to mold characters like Lecter or The Blind Man from Don't Breathe into protagonists may be done more for marketing dollars than anything else, but intentionally or not, it feeds into the same phenomenon that the opening of Halloween was dissecting. Plus, it dilutes the sense of mystery that defines great horror antagonists. Was the terrifying Leatherface seen in the original The Texas Chain Saw Massacre enhanced by the knowledge that he'd turn into an antihero decades later?

The air of ambiguity that defined these figures and their ominous auras are gone. At the same time, classic horror films that got much of their scares from subverting cinematic norms have spawned sequels that follow pop culture standards over who gets to headline mainstream fare. The tendency to treat famous horror villains like this is rampant, but that doesn't mean it must be permanent. It's time for future frightening movies to shift away from turning chilling villains into chilled-out protagonists, even if it means sacrificing sales in Funko Pop! Figures of The Blind Man.