What The Fart Is Happening? I Need You To Watch The NARCO SHARK Trailer

The TWIN PEAKS of sharksploitation films? Director Gerardo Preciado sure hopes so. 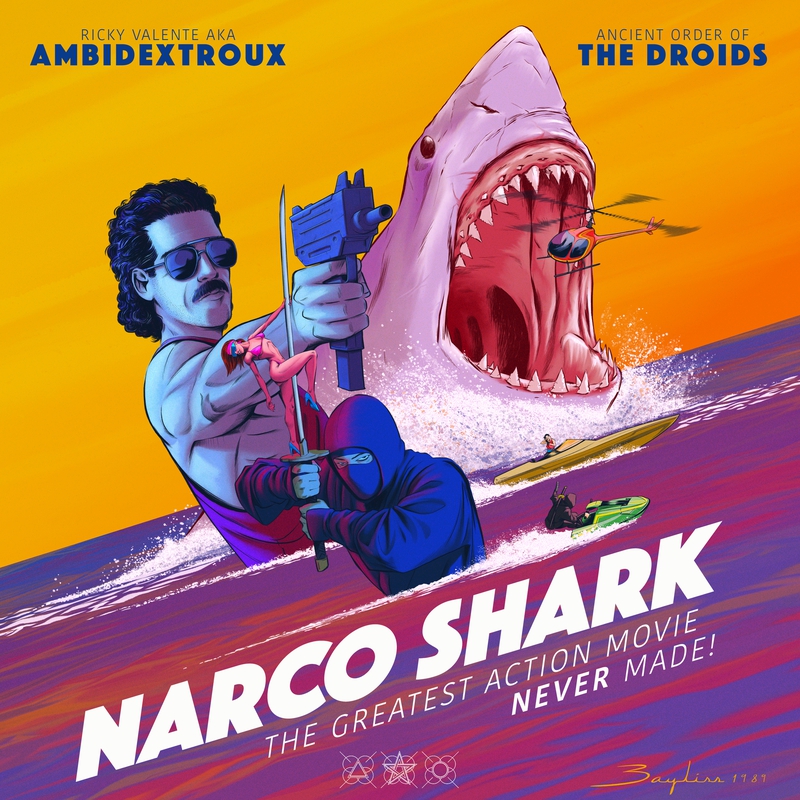 Director Gerardo Preciado wants to make "the Twin Peaks of sharksploitation films." Ok, you've got our attention. The story goes, in 1989, Mexican direct-to-video superstar Ricky Valente was in line to write and direct Narco Shark, a strange and ambitious film about a detective/saxophonist who battles the Mexican Yakuza and a cocaine-fueled Killer Shark while trying to save his marriage from falling apart and helping his awkwardly shy but sexually depraved brother in law learn some breakdancing moves. Sadly the film was never made… until now.

Gerardo even made a mock FANGORIA cover of action star Ricky Valente to further flesh out this strange alternate universe. 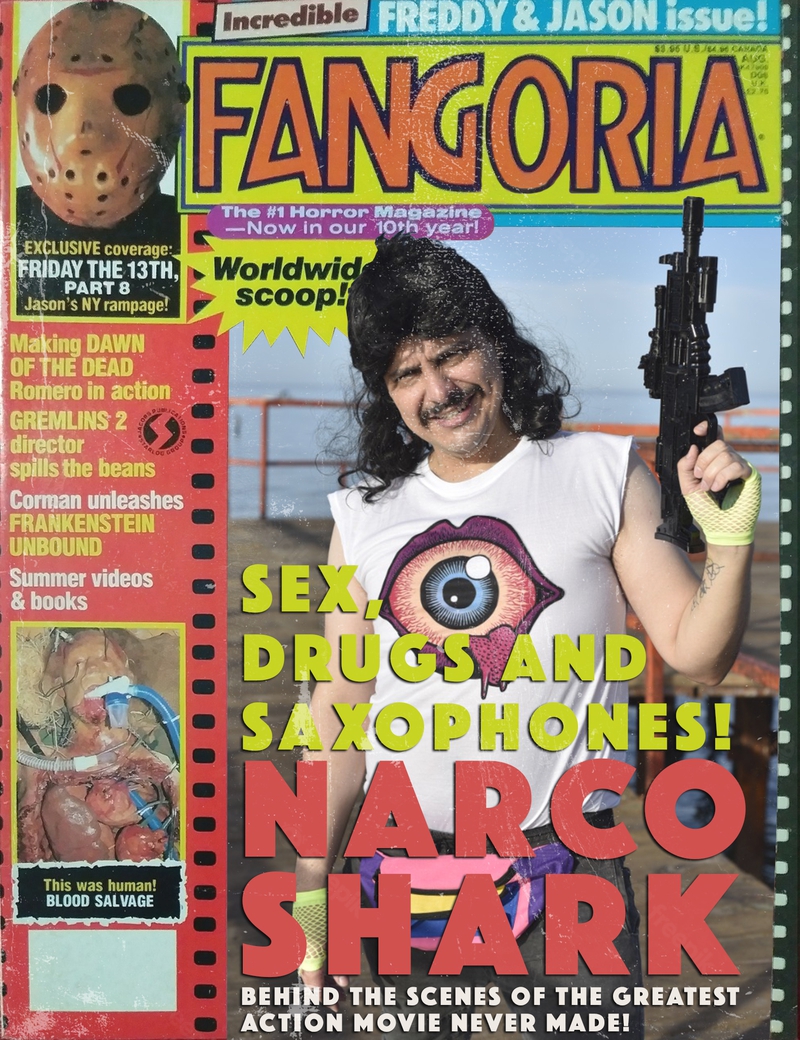 We asked director Gerardo about the method behind the madness, and the process of creating an "imaginary soundtrack" turned actual soundtrack for an actual movie. Here's what he had to say.

I've been making music for imaginary soundtracks for years now, I think I have released over 20 of them over the past 10 years, and I always have a story in mind, even more important than the plot of the film, I like to come up with the story behind the film, meaning, for instance, I have a film series called Terrore! I released a soundtrack for Il Maniaco: Il Origen Del Terrore! which is supposed to be a prequel for the film series (Il Maniaco is our main slasher) but really that film was a spanish movie released years before the original Terrore! and was called La Noche En Que El Diablo Salio De Su Casa (the night the devil got out of his house). It's a possessed child film that has nothing to do with the series that was rebranded a Terrore! film as a cash grab. By the way that album is just annoying noises, I advertised as "Not Suitable for Human Consumption."

Another example is that I released Zombiria (my Italian zombie series aka the most offensive movie never made!) along with Zombiria 2, but both are the same album, just like Fulci's Zombi is known as Zombi 2 in Italy (as an unofficial sequel to Dawn of the Dead) and just Zombi in the US. Many of the actual films my soundtracks are based off are BAD films! I actually take that back, I do not like using the "so bad it's good" way of describing films, I guess the closer way to say it is that they are "outsider cinema."

Anyways, I started releasing a couple of the soundtracks on vinyl through kickstarter and as a way of making things bigger, last year I actually wrote the screenplay for a Friday the 13th meets E.T. family horror film called My Little Slasher and I loved that experience, so the only way to grow this time was to actually make the damn movie!

As you can tell from the trailer, it's kind of weird. I wanted to make a film that you can watch with your friends and have a blast. Before the pandemic I had a "film club" which was to basically show a weird film to 10-12 friends, the catch was that they all went in blindly with no idea of what the movie or plot. I want to catch that feeling with this film, even when the trailer gets a little weird, let me tell you, you ain't seen nothin yet!

As I do with the soundtracks, I become what the film asks me to become. I'm not trying to be a great director (there will be time for that in the next project), I have to become a director that needs things fast and cheap! Turns out that if you want to make your film look like the filmmakers had no budget and no time, the best way to get that is to make your film with no money and no time!

Even though it's a "sharksploitation" film, there are a lot of other influences and inspirations, from '90s Spanish cinema (Alex de La Iglesia's Accion Mutante, Santiago Segura's Torrente) to art-house cinema (I want to make the Twin Peaks of sharksploitation films!) and even some Italian dream logic (à la Fulci).

You can stream the "imaginary soundtrack" here, and learn more about Narco Shark here. And now, behold the strange spectacle that is Narco Shark. We are hoping to enjoy this one at a rowdy midnight screening in the near future.