What Does MONTY PYTHON AND THE HOLY GRAIL Have To Do With THE GREEN KNIGHT?

More than you might realize, says director David Lowery. 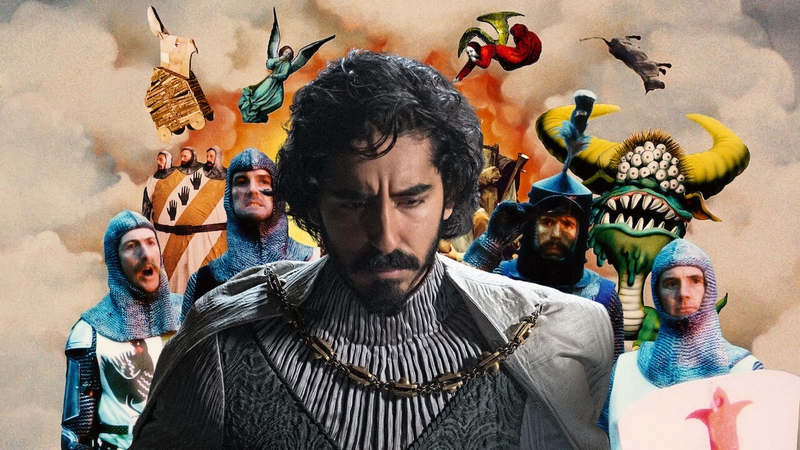 Last March, director David Lowery was frantically putting the final touches on his latest film, The Green Knight, in anticipation of a big premiere at the 2020 SXSW Film Festival. The finish line was in sight, everything was going according to plan, and then … well, then the pandemic showed up. SXSW was canceled, the release date for Lowery’s latest became a giant question mark, and in the days that immediately followed, I found myself on the other end of a phone, chatting with him about the experience.

That interview’s been kicking around on my phone for well over a year now, and after catching The Green Knight last week (it’s exactly what you’d want it to be weird - creepy, ominous, hypnotic and strange), I decided to pull up the audio and see if Lowery and I hadn’t said anything worth salvaging.

As expected, that interview turned out to be a bit too outdated to run outright (there’s nothing more jarring than looking back at how we were all talking about COVID-19 in its earliest days, long before any of us knew what the hell was going on), but there was one little section that did seem worth sharing here in the year 2021.

In it, Lowery explains the influence that Tarkovsky’s Andrei Rublev, and particularly Monty Python and the Holy Grail, had on The Green Knight. World-shattering information? No, of course not, but it’s a fun little bit of trivia to have in your back pocket the next time you find yourself in a Green Knight/Holy Grail conversation.

FANGORIA: You touched on the humor of the movie before - an element I honestly wasn’t expecting - so I’m wondering what sort of influence Monty Python and the Holy Grail might have had on this movie.

David Lowery: That is an excellent question! The influence was ... well, if you go back and watch Monty Python and the Holy Grail, it looks pretty darn good.

It’s true. I caught it at the Alamo Drafthouse back in December. I’d never seen it on the big screen before, and I really was shocked at how good it looked.

Yes, and so when we were in prep, I randomly just put it in one night, and I hadn't seen it in a couple of years - probably more like 10 years, at that point - and I was so blown away with how authentic it looked. And we had been going through this period of not being sure what the look [of The Green Knight] was yet. We didn't want it to look fake, or like just a bunch of people wearing costumes, and as we’ve all seen, it's hard to not do that with Medieval films. Everything's too clean, y’know? Everything looks new. Whatever the reasons are, [some Medieval films] just never feel authentic. Like, no offense to this film, I still haven’t seen it, but like, the most recent Robin Hood has Robin wearing a hoodie. There's often that instinct to modernize the Medieval garb so it looks up to date. We wanted to make this feel authentic to its period.

And Andrei Rublev, the Tarkovsky movie, is probably the high water mark for Medievalism, and when I watched Monty Python and the Holy Grail probably a week after I watched Andrei Rublev, I was like, "Okay, there's two movies that are authentically Medieval."

Andrei Rublev and Monty Python and the Holy Grail, a movie they made for, what, $300,000 pounds, I think?

In 1974 dollars! I was like, okay, how did they pull this off? And we really just took a lot of inspiration from the fact that they were able to, in a very low-budget fashion, make a very real, very believably Medieval movie that feels true to the time period in which it's set. And even though we ultimately went into a more fantastical direction, that was something I always kept close to my heart, the idea that, okay, if Terry Gilliam and Terry Jones and Eric Idle and all those guys figured out a way to make a movie that felt as authentic as Andrei Rublev on $300,000, then we can probably pull this movie off on the budget we have.

David Lowery’s The Green Knight is in theaters TOMORROW, July 29. You should see it; it’s great.

If you haven't seen this yet— check out an exclusive clip from The Green Knight showcasing some killer FX.