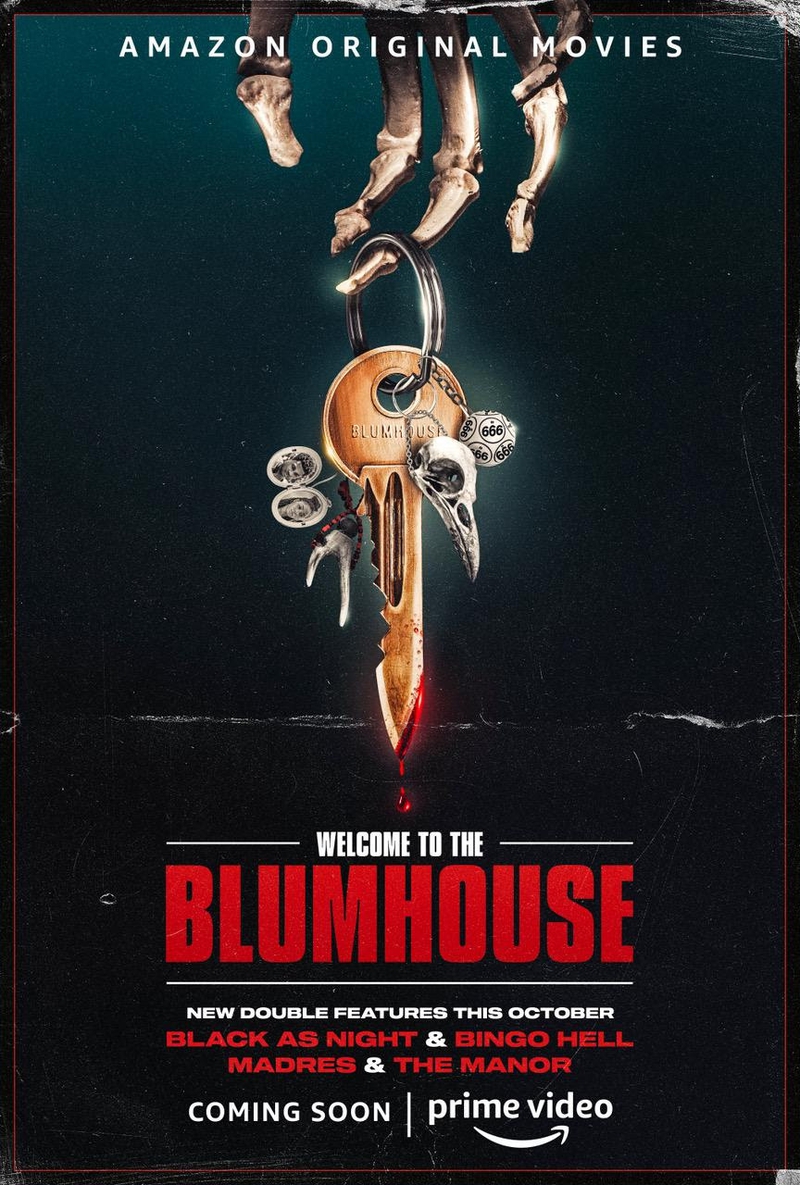 Blumhouse dropped a (technically) quadruple announcement today, this October we are getting four new Blumhouse movies in the form of two double features. Blumhouse is once again partnering with Amazon to give us Bingo Hell, Black as Night, Madres and The Manor premiering October 1 and October 8, respectively. The two-night event kicks off with Gigi Saul Guerrero's Bingo Hell and Maritte Lee Go's Black As Night, followed by Ryan Zaragoza's Madres and Axelle Carolyn's The Manor. Read on for more details on each of the four titles, including some exclusive quotes from a few of the directors!

First on the bill we have Bingo Hell, wherein "A feisty senior citizen fights to protect her beloved neighborhood from an evil force that’s taken over the local bingo hall and is killing the residents in gruesome ways." Starring Adriana Barraza (Drag Me To Hell), L. Scott Caldwell (Lost), Richard Brake (Mandy) and Joshua Caleb Johnson (The Good Lord Bird). This is what Gigi Saul Guerrero had to say about her upcoming feature, “Stoked!! Finally a horror movie you can watch with your grandparents where they see themselves as the heroes! This movie is for you, Abuela!” We can't wait to see killer abuelas seeking vengeance!

Premiering with Bingo Hell on October 1 is Black As Night. "A resourceful teenage girl driven by revenge, alongside her trusted friends, spends her summer battling vampires terrorizing her city of New Orleans." Starring Asjha Cooper (All American), Fabrizio Guido (World War Z), Mason Beauchamp (Eat Brains Love), Abbie Gayle (Gothic Harvest) with Craig Tate (Ravenswood) and Keith David (They Live). Maritte Lee Go is continuing the realization of a lifelong dream, "When I was 14, I wrote in my journal that it was my dream to direct horror films. It is surreal to continue to realize that dream. Black as Night is a really fun movie about a young black girl who takes vengeance on a group of vampires terrorizing her neighborhood in New Orleans." Manifesting vampires in New Orleans, we are one hundred percent here for it.

Continuing the double feature fun for a second night on October 8, we have Madres. "Expecting their first child, a Mexican-American couple move to a migrant farming community in 1970’s California where strange symptoms and terrifying visions threaten their new family." Starring Tenoch Huerta (The Forever Purge), Ariana Guerra (Helstrom), Evelyn Gonzalez (A Boy. A Girl. A Dream.), Kerry Cahill (The Walking Dead), and Elpidia Carrillo (Predator). Intrigued to find out what those "strange symptoms" entail and to see what Ryan Zaragoza has in store for us.

Paired with Madres is Axelle Caroyln's The Manor. "After suffering a mild stroke, Judith Albright reluctantly moves into a historic nursing home where she becomes convinced a supernatural force is killing the residents." Starring Barbara Hershey (Insidious), Bruce Davison (The Lords Of Salem), Nicholas Alexander (Good Girls), Jill Larsen (The Taking Of Deborah Logan), Fran Bennett (Wes Craven's New Nightmare) and Katie Amanda Keane (Ruby & The Rockits). Here's what Axelle had to say about The Manor, “This movie is very personal and dear to my heart, so I cannot wait for everyone to enter The Manor!”

Welcome To The Blumhouse is a two-night event, with four feature films premiering on October 1 and October 8, streaming only on Amazon.