An exclusive conversation with Kevin Bergeron, co-founder of Waxwork Records. 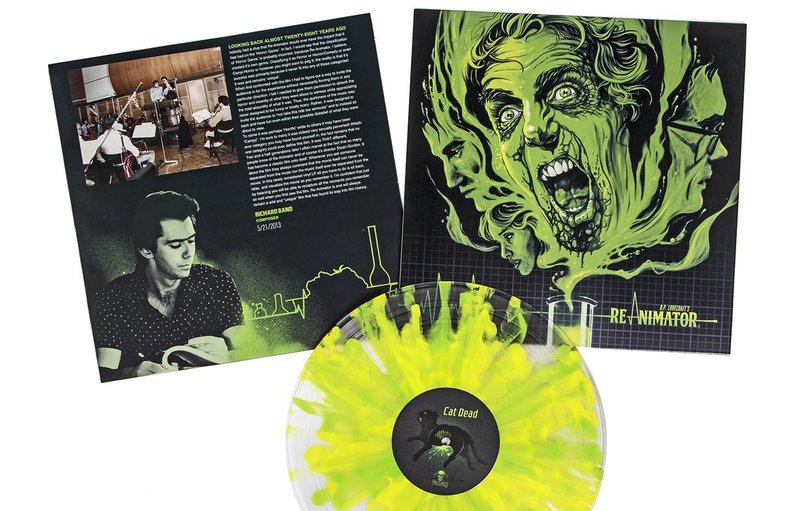 The REANIMATOR score on vinyl, out from Waxwork Records.

Although even they don’t quite recall which month it first appeared — June or July — Waxwork Records released its first title eight years ago this summer with Richard Band’s score to Stuart Gordon’s Re-Animator. Waxwork would become one of the premier distributors of soundtracks on vinyl, an industry that was at the time only beginning its commercial recovery, thanks to a new wave of physical media that tapped into the collector’s mentality with original artwork, unique packaging, exclusive material both on wax and in the liner’s notes, and most alluring of all, a murderer’s row of titles that any genre fan would kill to get into their hot little hands. With more than 100 titles in their ever-expanding library, Waxwork has become a go-to label for both studio films and deep-cut obscurities, offering standard-bearer quality of packaging and presentation that has inspired or since been imitated by dozens of other companies trying to claim their stake of this incredibly fertile market.

“The goal, honestly, is to acquire new fans, for lack of a better word describing the people who buy our records,” says Kevin Bergeron, co-founder of Waxwork. “I know what that feeling is like when you discover something and it's like therapy, like ‘I found this at a specific time in my life where I really needed it.’ I want the customer to be stoked with what we're releasing, to capture that vibe and that energy we felt when we started the record label — the butterflies when you notice something cool — and I try to apply that to what we do all the time.” Bergeron recently spoke to FANGORIA about the history of the label from 2013 to today, the hallmarks that make their releases special, and the challenges they have faced, especially in recent months, to continue delivering great records while demand is higher than ever but there’s still a pandemic slowing down the supply chain. That said, he offered a few hints about some upcoming titles that their “fans” will be able to add soon to their collections.

Talk about your background and what prompted you to launch Waxwork in the first place.

My background within the arts is playing music and I’ve always been interested in music [and] cinema. But when my last band split up, it came at this interesting crossroads because my partner, Susie [Soto], who we run Waxwork together, purchased a bunch of records for me for Christmas in 2012. And within that stack of records, there were a bunch of soundtracks, old titles from Varèse Sarabande and also newer stuff from contemporary labels. And that's how the wheels started turning, because maybe one or two labels were doing it and putting out a couple of records a year. So we wanted to do it in a deluxe manner that included liner notes from the composers and the directors, basically creating historical releases kind of like Criterion Collection, but for horror soundtracks. That was kind of our hook. 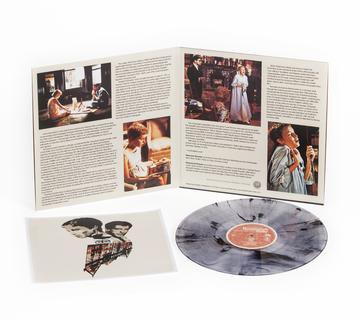 This was around the same time as Death Waltz and Mondo. How much, if at all, did you know about what they were doing?

It wasn't until we decided to start Waxwork that we discovered Mondo, who only had about two soundtracks out at that time. But Spencer [Hickman, of Death Waltz] kickstarted the modern horror movie soundtrack wave with his company, and I thought that a lot of the early Death Waltz titles were extremely cool, like Zombi and The Living Dead At Manchester Morgue. So we were like, this is an avenue that we can possibly be successful at, but we didn't think that it was going to be this massive thing that exploded, because I think that when Waxwork came onto the scene, that changed a lot of things, especially with our release of Rosemary's Baby. Because no one was really going after major studio stuff and we locked that in with Paramount. And when that happened and we announced it, this kind of explosion happened. You started seeing everyone getting very aggressive with licensing titles and then everyone's flying out to Los Angeles to license things with studios. And then we started seeing smaller labels sprout up, getting into even more of a niche, like VHS horror or anime. But the Rosemary's Baby release was this catalyst for everyone to [believe] this can be done in such a manner where [distributors] can release stuff with major studios.

Obviously Rosemary's Baby was one of them and Re-Animator was another early title, but what were the holy grail soundtracks that you wanted to start with? What inspired you to choose a big studio film over something that might be smaller or seem more attainable?

The titles that Waxwork has gone after are always titles that we are fans of, like Rosemary’s Baby or The Warriors or Taxi Driver. We just want to release things that we're fans of — like, wouldn't it be cool if we put out Day Of The Dead or Re-Animator? So all of our titles are representative of that.

The process of working with major distributors involves lots of hoops to jump through. How challenging was that to adjust to, and was there a point after doing a particular release you remember companies offering to open their vaults a little wider than maybe they would have a few years earlier?

That's happened for sure. It's just a lot of learning as you go, a lot of times not even knowing how to do it, or having the proper ammo or the right things to say. But when you present yourself in a certain manner, whether it’s to a rights holder, like a composer who retained his rights, or as big as a Warner Bros. or something, conducting yourself in such a way where you're genuine and passionate about a project speaks volumes. I mean, I was told recently, 'You know exactly what you're doing,' but really it's just a lot of application because there's no other option. I feel like if the wheels fell off, I could probably get a comfortable job doing something else within the entertainment industry. But that's because of Waxwork — because of all of the connections that I've made. Prior to running a record label specializing in soundtracks, we had no idea. We just did it. But when you have even a small discography, you have something to show for all of the hard work, and something physical that you can send to someone. It feels good getting to a point where it's taken very seriously, and even though studios now are releasing a lot of their stuff in-house because soundtracks are a market again, and vinyl is big again, it feels good knowing that Waxwork is a key player in the game. People come to us now on new stuff like Army of the Dead and Fear Street with Netflix. These were presented to us because they know that we’d do a good job and we really care about what we do. 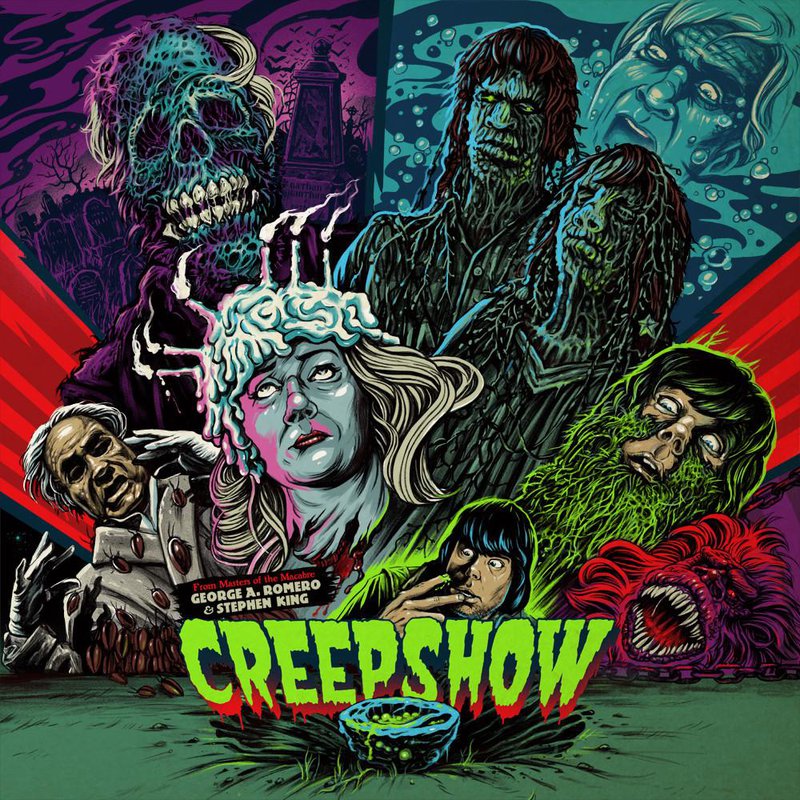 In terms of packaging or releases, are there essential components that you ensure Waxwork releases have every time?

Absolutely. I think it's very clear when you're holding a Waxwork release. I get frustrated when I go to the record store because I collect records and listen to most of my music on vinyl, and I know how much I'm charging for Waxwork records, and I'm like, 'Give me a reason to want to have this in my house forever.' So we established as early as our second release that all of the Waxwork releases need to have old-style gatefold jackets and match set encoding and 180 Gram color vinyl. And then, when it's appropriate, some sort of deluxe nature to the packaging; what I mean by that is for example, for John Carpenter's The Thing we did that crazy breakaway ice slipcase. And for Army of the Dead, it's this whole interactive packaging where you tear open a zombie’s face and open up a vault to get to the record. We’re always thinking outside the box and always taking into consideration, 'What are some things with this property that we can explore to include it within our packaging?'. We were the first soundtrack record label to create names for the vinyl variants, like Re-Animator “Re-Agent Green” or for Creepshow, “Father's Day Blood-Splattered Cake” or something like that. So naming the variants, having this crazy deluxe packaging, ensuring that it's brutally a Waxwork release that I'm holding in my hand versus anything else.

Which titles that you’ve released have been the most special to you personally?

The Warriors was a really special one for me because the score had never been released on vinyl, there was a soundtrack released in 1979 but we were able to release that in addition to the complete score. We also did that with Taxi Driver and that was a big one as well. We were able to acquire the original masters and remaster that from the original tapes and release that in addition to the soundtrack that had been released back in 1976. So that was cool expanding those two things. Cruising is another example of this kind of monumental release for us, that we were able to acquire a lot of unreleased songs by The Germs and work with the original masters. But a lot of those very early Waxwork releases are super special, Creepshow and Day of the Dead, Rosemary’s Baby, Friday the 13th Part I, all of those I consider to be Waxwork classics.

Are there upcoming releases you can share that you haven’t announced yet?

We're doing Killer Klowns From Outer Space as part of our annual subscription. We have a lot of really cool stuff coming, like The Texas Chainsaw Massacre 2. But vinyl turnaround times have been murder because the vinyl industry has exploded in such a manner where there's not enough resources to meet the demand. The demand is more than double what anyone can release in a reasonable amount of time, so turnaround times have gone from eight to ten weeks to ten months to release a record. They're trying to catch up on all of the work that came in during the plant closures. And then, in addition, a lot of people got into collecting records during the pandemic. 2020 was a really good year for record labels. Our sales last year were the best that we've ever had. We feel very lucky and fortunate to be in a position where people wanted something to listen to at home, and records are a really great, intimate way of enjoying recorded music. So demand has not gone away. It's only grown, so it's all contributed to this situation now where it takes a long time to make a record. But we're doing Godzilla vs Kong, which is cool. We're teaming up with Rob Zombie to do some really cool stuff that's unrelated to his movies, so we're going to be releasing some horror soundtrack stuff with him soon. It’s been really cool working with like Rob Zombie, because those soundtracks to the Firefly trilogy [The Devil’s Rejects, House of 1000 Corpses and 3 From Hell] had never been released on vinyl. So you've heard those songs before, like “Freebird” and “Don't Fear The Reaper,” but never in the context of the soundtrack from the movie. So it was really special for us to compile the entire soundtrack and then pepper in some of the score music, and then also have the direct involvement where Rob was art directing and providing long essays and exclusive liner notes, being totally hands-on and really great to work with. That was really special to release those soundtracks for the very first time, because people have wanted them.