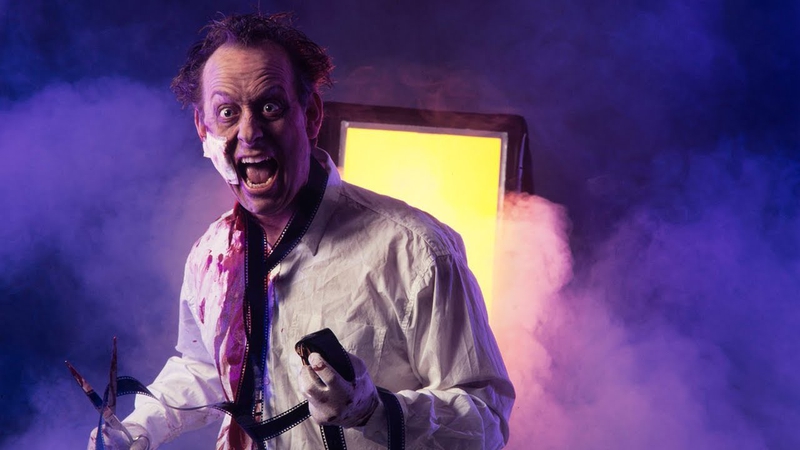 Spending hours on end watching, rewatching, and re-rewatching the grimiest frames of grindhouse cinema might make anyone go mad, which means the editors responsible for clipping films into viewing shape are most likely to succumb to delusion. Take Eddie Tor Swenson (Johan Rudebeck), the docile, dull hero of Anders Jacobsson’s Evil Ed. He’s a bespectacled fellow content to trim away the driest parts of stuffy Euro-cinema, until the day comes when an opening pops up in the “Splatter and Gore Department” and Eddie’s given the job on the spot. The last guy blew his head off with a grenade. So it goes. Eddie particularly doesn’t want to subject himself to sex and graphic violence, but he has no choice. Snip snip. Cut cut. Cue lunacy.

Ed’s first head trip happens while he’s cutting bread; he looks away for a second, and wouldn’t you know it, when he turns his attention back to the loaf, he sees a bloody arm on the cutting board. But who among us hasn’t, at one time or another, imagined a grisly severed limb here and there? All work and no play plus too much carnage inflicted on a gentle soul does that to a person. It’s the second hallucination that really pushes Ed over the line: “Don’t you fucking look at me!” shrieks the gaunt, ghoulish figure, conjured off the celluloid tormenting Ed at his workstation and staring him in the face. Ed, gentle Ed, clutches his chest, stumbles backward into his chair, and the maniac disappears. But the damage is done. It’s the moment where Ed is irrevocably parted from his sanity.

“Don’t you fucking look at me!” The line is delivered rhythmically, like bad slam poetry at a college coffee house. It’s a morbid and fitting image to rob Ed of his sanity. He’s an editor. Check out the double entendre in his name. (Jacobsson gives not even half a shit about subtlety.) Film editing is traditionally characterized as “the invisible art,” both the most important step in filmmaking and the easiest to overlook. Editors don’t receive any glory (though they deserve plenty) unless they’re on Thelma Schoonmaker’s level, which few editors are. In Ed’s case, staying out of view works just fine. He’d rather go to the office, do his work, and go home without attracting attention. There’s a reason he imagines the gaunt man. He doesn’t want anyone to notice him; he doesn’t want to be seen.

So while his reassignment leads him down the “serial killer” career path, Ed remains fundamentally Ed: A solitary man who wants to stay out of sight. Having been shoved by his loud and licentious boss, Sam (Olof Rhodin), from the safety of his comfort zone, Ed loses it. It’s not like he’s in the limelight, either. He’s even more isolated working on the Loose Limbs movies, the crown jewel in Sam’s body of work, than he is when working on those Euro arthouse dramas. Sam generously offers Ed his countryside cottage for peace and privacy as he works, though of course the offer is an order disguised as munificence.

His only contact with the outside world is either Sam, his wife, Barbara (Cecilia Ljung), or Nick (Per Löfberg), one of Sam’s low-rung employees, who routinely visits the cottage to drop off new reels for Ed to review. Like Jack Torrance, the solitude goes to his head.

It’s the increased profile and the content of the reels that matters most. Ed is a star in Sam’s department, a status he can’t tolerate, and he’s exposed to material he wouldn’t bother with on his own time. Textually, we understand why he evolves from mild to murderous. Subtextually, Jacobsson is taking the piss out of the Statens biografbyrå, Sweden’s film censorship board, established in 1911 and dissolved 100 years later after everyone involved apparently realized that banning kids under eleven years old from seeing movies like E.T. makes no goddamn sense and that, perhaps, censoring art doesn’t keep people from actually seeing it. That’s a lesson England learned in the 1980s, when their state censors’ pearl-clutching efforts to protect the public from the dangers presented by video nasties wound up backfiring; the harder they tried to ban these movies, the harder audiences tried to find them and watch them for themselves.

Censor, Prano Bailey-Bond’s feature debut, which premiered at Sundance and became commercially available in June, wades into similar waters as Evil Ed, though stylistically they’re apples and oranges. Like Evil Ed, Censor argues that censors self-edit, confining themselves to social, cultural, and political hermetic bubbles that make them more, and not less, vulnerable to the objectionable “stuff” they’re tasked with cutting. Grant that in Censor, Bailey-Bond’s protagonist, Enid (Niamh Algar), actually is a censor, and that Ed is, well, an editor, and that these are totally different vocations. Ed takes it on himself to “correct the world” only after talking to another hallucination, a mental patient (played by Göran Lundström), who urges him to kill to make the world a better, gentler place. 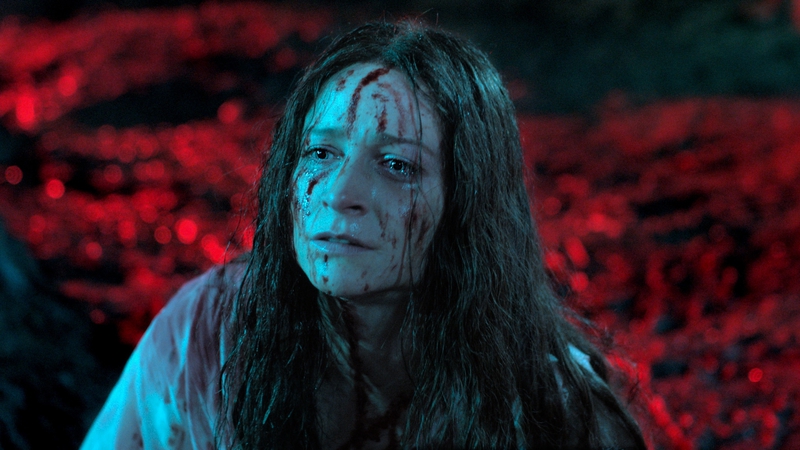 In the end, Ed and Enid both go about slaughtering innocent people under the influence of their respective fantasies. But Censor is in conversation with horror’s history more so than any specific horror films (though it does have a certain Powell and Pressburger vibe with just a touch of Strickland throughout); conversely, Evil Ed is in conversation with horror films more so than with history, even though history gives the plot its foundation. Jacobsson loves the horror of horror, the effects, the atmosphere, and leaves clues about his own inspirations right out in the open, Sam Raimi most of all. It’s why Evil Ed never takes itself seriously, why there’s a sense of something close to joy when Ed slam-dunks Sam’s severed head into a garbage bin, why Jacobsson can’t pass by an opportunity for a good, corny one-liner, and why, ultimately, the scariest scenes are those featuring Ed all by himself.

About halfway through Evil Ed, around the time Ed goes full-psycho and right before a home invasion goes terribly for the home invaders, Jacobsson shows Rudebeck smiling maniacally, haphazardly hacking away at a film strip with his scissors as the sounds of revving chainsaws and death shrieks ring in the background. We don’t see the movie Ed is cutting; we just hear it. All we see is the film being tortured in his hands, and so to the eye, the film itself might as well be the screaming victim. Evil Ed is a fun ride and a treat for all lovers of practical FX, but it’s especially one of the 1990s’ most underappreciated comments on how much people need horror for their own health - and what happens to the folks who not only avoid it, but try to kill it.