Vault Comics' NIGHTFALL DOUBLE FEATURE Is A Celebation Of Horror

From bones growing out of couches, to wicked and threatening landscapes, NIGHTFALL creators discuss their upcoming DOUBLE FEATURE. 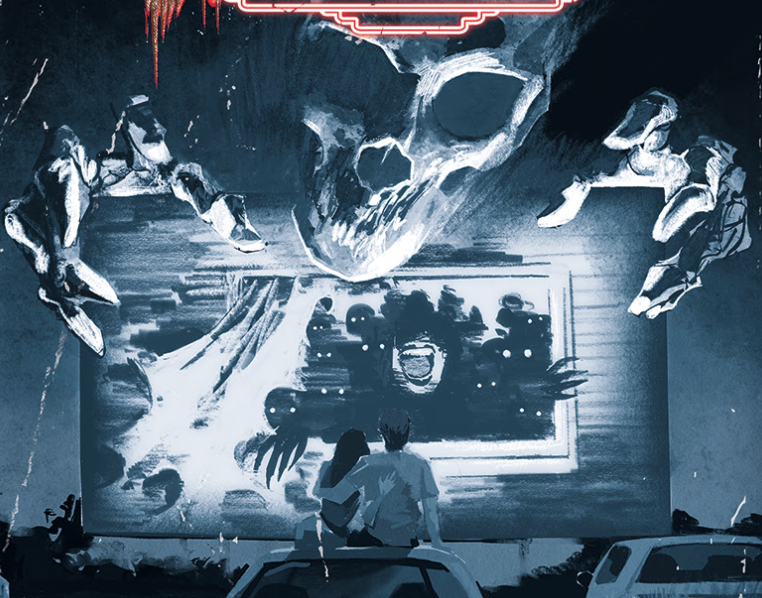 We hope your mental fortitude and popcorn buckets are strong enough to survive through NIGHTFALL: DOUBLE FEATURE, Vault Comics' first double feature horror comic. The double-sized comic contains two ongoing horror stories from the creators of some of the most haunting comics, such as House of Slaughter, The Autumnal, The Plot, and Resonant. Get comfortable because it's going to be a hell of a time. 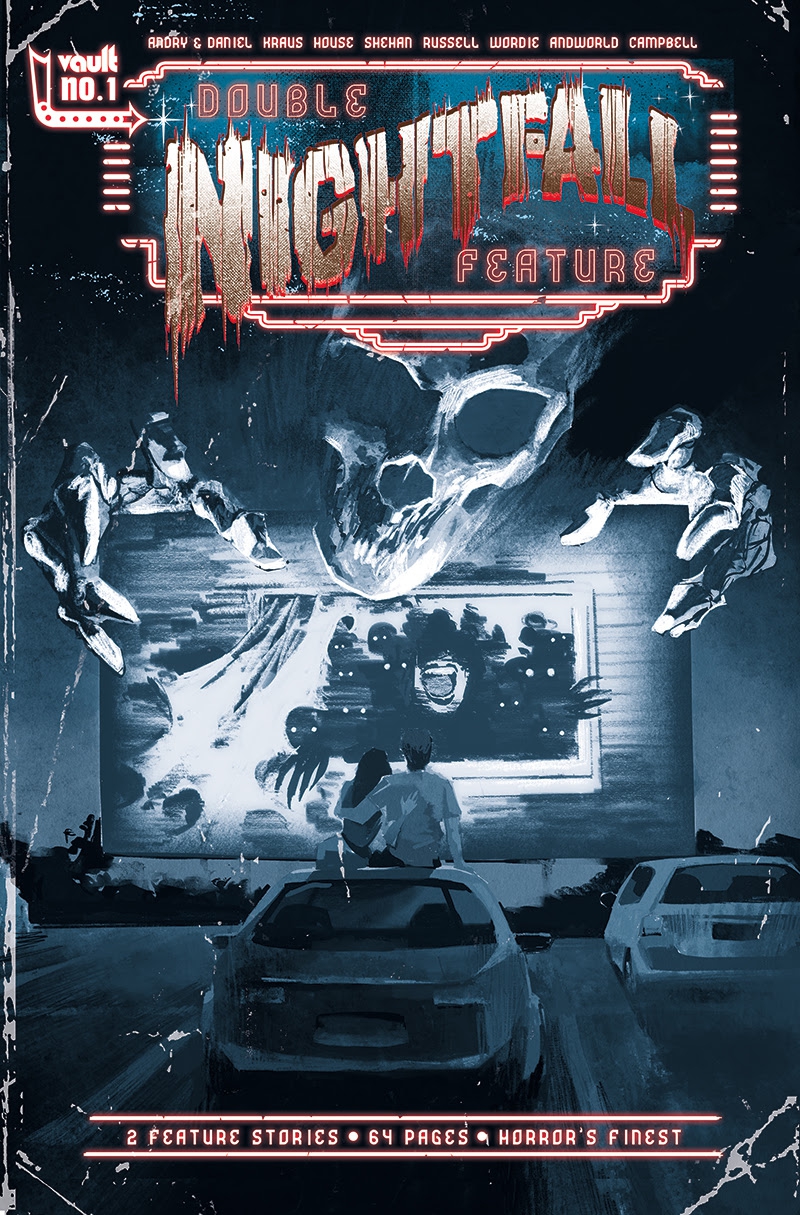 Feature one is The Cemeterians, written by New York Times Best-Selling author Daniel Kraus (Creepshow, The Living Dead,The Autumnal, The Shape of Water, ), drawn by Ringo Award nominee Maan House, colored by Kurt Michael Russell (The Plot, The Blue Flame), and lettered by Andworld Design. The story begins after human bones begin growing inside inanimate objects all across the globe, a renegade scientist and brilliant theologian delve into the cemeteries where the bones originated, discovering an otherworldly force tired of being buried in darkness. When asked by FANGORIA about why people seem to fear bones, Kraus said this:

"There is probably nothing more primordially disturbing to human beings than a human skeleton—human bones have been the shortcut to accessing our anxiety over death since our species became self-aware. But it's also the most intrinsic thing to being humans—we have bones, you know? So it's a push-and-pull: we abhor them, but we also have to love them. We behave so tenderly to the bones of our loved ones that we bury them, as if they're not pieces of organic matter that will spoil, but rather seeds capable of growing something. It's madness! But a uniquely human madness, which makes it fun to play around with in a story. If human bones, these concrete symbols of life, started showing up in your sofa cushions, or your brick walls, or car engine, how the hell would you process that?" 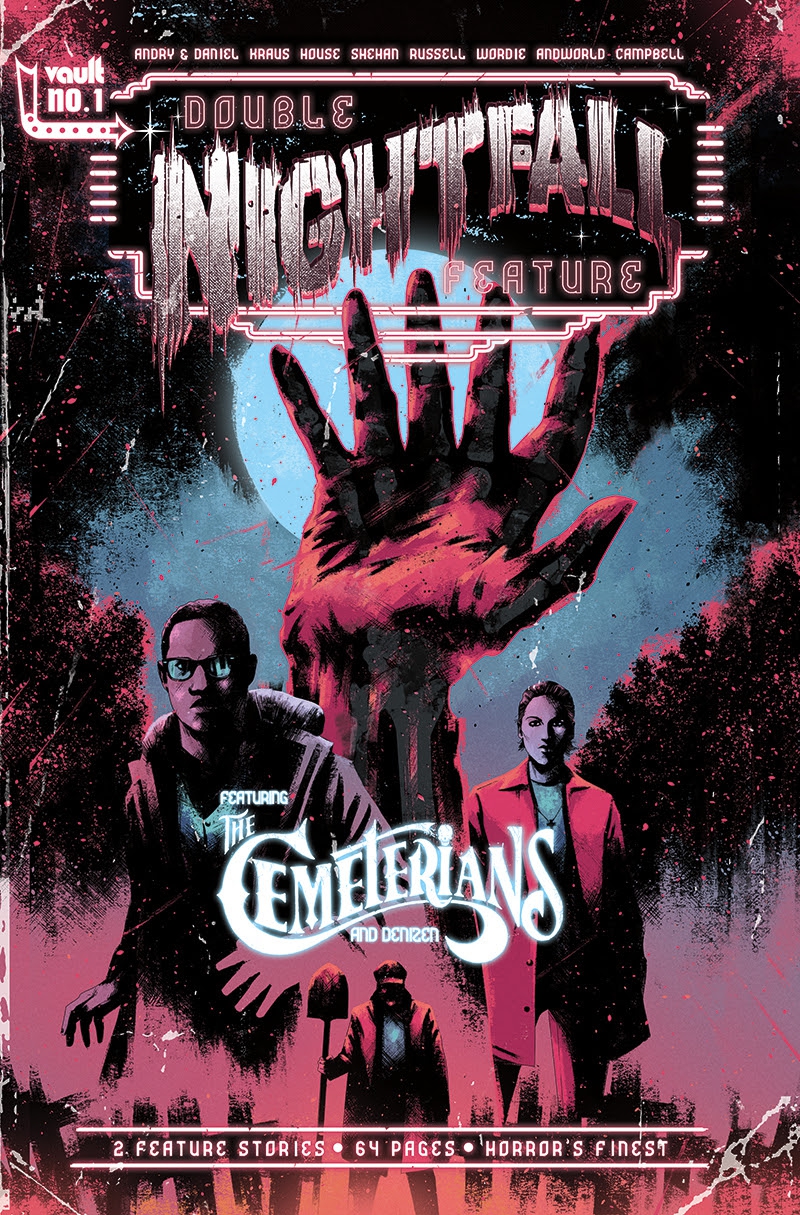 The second feature of Vault's Nightfall double picture horror show is Denizen, written by Tim Daniel (The Plot, End After End) and David Andry (Resonant, End After End), drawn by Chris Shehan (House of Slaughter, The Autumnal), colored by Jason Wordie, and lettered by Jim Campbell. A family's cross-country road trip goes off the map and into the unforgiving wilds of Joshua Tree National Park, when mom and wife-to-be Helene succumbs to a malevolent force tucked inside an abandoned camping trailer. When FANGORIA spoke to Daniel about why the team chose to set the story in a National Park, he said that "This landscape, in particular, is wicked and threatening. Everything in the desert has spikes, fangs, a good thick hide, and sharp claws. Nothing seems to capture that more than the Joshua Tree itself, which simply looks alien by design." 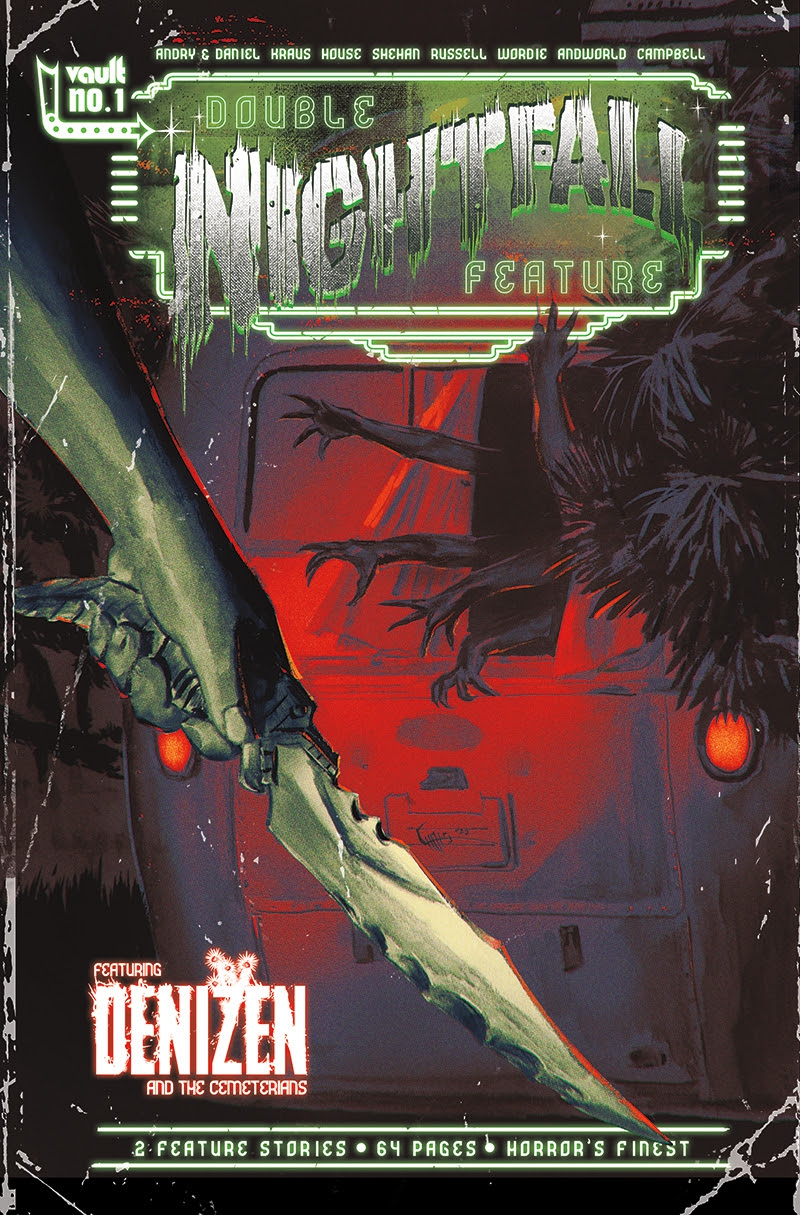 "The double feature--and I'm not quite sure why, is so perfectly suited to horror," said Nightfall mastermind, Tim Daniel. "You can pair any two-horror tales of nearly any type together, and what you get is thrilling. The stories can complement and/or contrast each other, the most psychological, interior horror, or perhaps the most lowbrow schlock for instance, and what you'll really learn from the experience is horror is the most versatile and malleable genre. The breadth, width, and scope of horror make it very resilient. In that sense, Nightfall: Double Feature is really a tribute to the genre and a celebration of how it has been embraced by Vault readers."