If you don't know Valancourt, it's time to meet Valancourt. 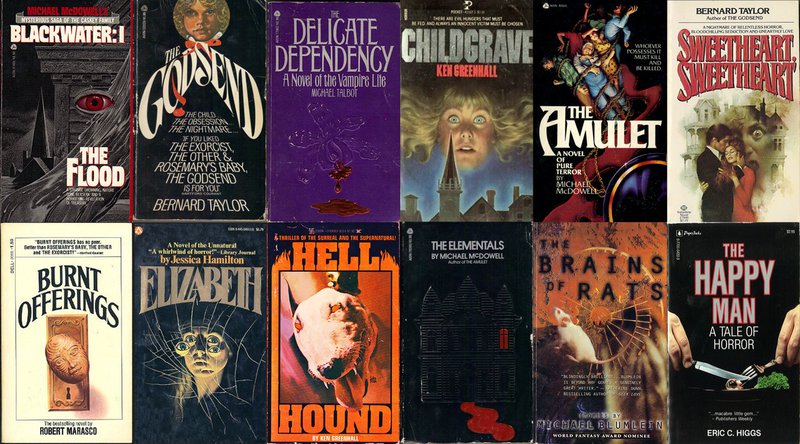 There’s a lot going on in the catalog of Richmond, Virginia-based independent publisher Valancourt Books. Horror fiction and queer fiction and queer horror fiction. Victorian-era chillers (see: a female-penned vampire novel that came out the same year as Dracula) and ‘80s schlock (check out this keytar-playing skeleton freaking shredding). Killer: Birds, dogs, ghosts, houses, golems, jewelry, Bigfoot. Post-apocalypse and hard sci-fi and magical realism, oh my! If the variety looks a bit daunting, take heart: no matter which book you pick to pop your Valancourt cherry, chances are good you’re going to like it.

Or at least that was true for me when, in 2018, I made an impulse purchase of Gilded Needles (1980) – a gnarly historical horror about a family of female criminals in Gilded Age New York and the upper-class family they’re determined to wreak vengeance on. Hooked, I moved onto author Michael McDowell’s other works, then a few other horror authors that looked promising (Bernard Taylor, Elizabeth Engstrom), then – suspecting that, damn, these Valancourt guys must know what they were doing – the great Big Random Whatever, bouncing around from ‘80s horror about killer bog people to stacks upon stacks of classic short story anthologies featuring authors like Charles Beaumont (a Twilight Zone regular) and Fredric Brown (whose title story from Nightmares and Geezenstacks [1961] would become a classic Tales from the Darkside episode). Dozens of books later, my bank balance hated me, but I could honestly say the number of books I straight-up disliked could be counted on one hand.

Valancourt authors may literally span the centuries – their published works range from the 18th to the 21st – but if you have to choose an archetypal Valancourt author, McDowell fits. Dead since 1999, McDowell was a popular writer of horror paperbacks in the ‘80s – Stephen King once called him “The finest writer of paperback originals in America today.” – who slid into obscurity after his books, one by one, went out of print. (He also wrote an early draft of Beetlejuice.)

Enter Valancourt Books, which takes books unfairly thrust into the dustbin of the publishing world and gives them new life and a chance to earn a new generation of fans. The company was founded in 2005 by James D. Jenkins and Ryan Cagle following one specific incident: “I was researching a forgotten 18th-century gay author of Gothic horror novels named Francis Lathom for a paper for grad school, and it turned out the only place in North America to access most of his works was at the University of Nebraska –on microfiche,” recalls Jenkins. “We were living in Seattle at the time, and after driving 28 hours – each way! – to get these ridiculous microfiches and sitting at the library squinting at the blurry text and feeding nickels into the machine to print the pages out, we decided that in the 21st century there had to be a better way. Obviously we’ve come a long way since then, but Valancourt started with the two of us typing out books from old microfiches in our Seattle apartment and printing the books at a local printing company.”

Valancourt started with British Gothic novels – says Jenkins, “hundreds of them were published in the 18th & 19th centuries, but only about ten were still in print in the 21st” – then expanded its roster over time to reflect the sorts of books that Jenkins and Cagle became interested in, whether Victorian horror, mid-century gay fiction, international genre fiction (most of it never before published in English), or mass-market horror titles. Thirteen of those can be found in Valancourt’s Paperbacks from Hell series, a collaboration with Grady Hendrix based on his non-fiction book of the same name, subtitled The Twisted History of '70s and '80s Horror Fiction. “It may sound like an odd mix of things to publish, but the unifying thread is that they’re all great books that were essentially totally inaccessible to readers,” says Jenkins.

Both Hendrix and Elizabeth Engstrom, who’s written three books that have been republished by Valancourt, emphasize that when Valancourt publishes something, it publishes it right – from fair contracts and sending the 1099s on time to attention to detail in prepping the copy for a new edition to active promotion on social media. (Plug time: Valancourt is on Twitter, Facebook and Goodreads.) For the Paperbacks from Hell series, it was very important to Hendrix that the books be published as the neon intended: mass market paperbacks, with original cover art whenever possible for that primo ‘80s funk. “They’re 16 bucks apiece. People were so angry about that early on,” says Hendrix. “And it’s like, ‘Dude, that is less than $20. For a book back into print, with an introduction. With the text getting corrected, the original cover or something as close as we can get to it. And everyone’s getting paid for doing it the right way!’ It’s funny, people really want things done the right way until their pocketbook gets involved. But we haven’t heard complaints about that in a while," – presumably, Hendrix posits, because once the first batch of books actually came out, people realized how good they were. (If you don’t think the skeleton keytar cover is worth $16, get out of my face.)

But doing things the right way, when you’re running an outfit that republishes older books, means – play the Wilhelm Scream here if you wanna – rights issues. “It’s unbelievably complicated,” says Jenkins. “People email us and say ‘Why don’t you reprint ______?’ Unfortunately, it’s not that easy. Unless a book’s out of copyright, we can’t just reprint it, we have to get permission. And it’s not much of an exaggeration to say that books are never out of copyright – it’s a 95-year term for older titles and 70 years after the author’s death for more recent ones. So if you find some old, crumbling, falling-apart hardcover from 1930 at your local antique store, it’s probably still in copyright for several more years. And with a book written in the ’30s, ’40s, or even the ’70s for that matter, the author may be long dead, and tracing their estate requires many hours of detective work and isn’t always successful.” Beyond the detective work, there’s dealing with a book’s original publishing company, which – explains Hendrix – will often play some “dirty freaking tricks” to keep the rights to an author’s book away from that author, even when the book’s long out of print and the publisher has no intention of giving it a new edition.

As a result, there are “quite a few” books that Valancourt wants to publish but has not (yet) been able to get their hands on, says Jenkins – though some of the company’s standouts, like Joan Samson’s stone-cold classic The Auctioneer (1975) and Mendal W. Johnson’s Let’s Go Play at the Adams’ (about a babysitter held captive by her young charges – it will leave you shell-shocked), were on that list for years before Jenkins and Cagle finally cracked them. “Most sane publishers would have given up at some point, but we kept after them until we could bring them back into print,” says Jenkins. “I won’t mention any specific white whales we’re still pursuing at the moment, but there are a number of them, and with luck one day they’ll wind up as Valancourt editions too.”

In the meantime, Valancourt has plenty of already-republished books to keep the literary horror hound busy – including many by writers from marginalized communities. Jenkins points out that many of the queer titles Valancourt publishes were literally illegal at the time of their original writing. Hendrix, meanwhile, expresses frustration with the lack of BIPOC writers in the Paperbacks from Hell series thus far, noting “There was a whole subset of Black pulps and Black fashion magazines and things like that that were coming out in the ‘60s and ‘70s and ‘80s – and really, those had to have been publishing fiction… [But] we just don't know enough about that world to know who the authors were who were publishing.”

Republishing the works of female horror authors is an area where Valancourt excels. In addition to works by Engstrom, Lisa Tuttle, Bari Wood, Samson (who tragically wrote only The Auctioneer before passing away months later), and more, there’s Valancourt’s Monster, She Wrote line, currently consisting of four books by individual authors and one short story anthology titled Women of Weird Tales. “Even during the big horror publishing boom of the ’70s and ’80s, women authors were in the minority, and it’s only really been in recent years that we’ve started to see women authors and authors of color more represented in horror publishing – though of course there’s still a long way to go,” says Jenkins. At the same time, Hendrix adds, there were women authors in the horror space at that same – and not just Anne Rice and VC Andrews. With Paperbacks from Hell, he says, “that was one thing that was really important: making sure that [the series] was representative of who was out there, not just the people… who had the best press agents.”

One of the women who’s rightfully found a new fanbase thanks to Valancourt Books and Paperbacks from Hell is Elizabeth Engstrom (now called Liz Cratty), whose first book –When Darkness Loves Us (1985) – is anchored by a chillingly sweet (or sweetly chilling, but mostly chilling) novella about a young woman who’s trapped underground and…. spoilers. It’s “very gratifying,” says Engstrom, that Valancourt has brought her a whole new set of fans. (A new set of royalty checks can’t hurt either.) Since the republication of When Darkness Loves Us – and, later, vampire tale Black Ambrosia (1988) and short story anthology Nightmare Flower (1992) – her books have been translated into multiple languages, and an option has been taken out on When Darkness Loves Us for a film adaptation. “Continuing to write, it’s a slog,” she says. “You keep going, and you keep doing it. And every now and again you get a little golden moment. In the life of an author, that is when someone appreciates something you did back in 1985." Engstrom, too, was introduced to the other books from the Paperbacks from Hell series, “some of [which] just knocked me out. I would never have come across these books if it wasn’t for Paperbacks from Hell. And now I’m a fangirl of these authors.”

Engstrom is one of a handful of authors whose association with Valancourt has spawned new work – in her case, a new short story in The Valancourt Book of Horror Stories: Volume 4. In other cases, being republished by Valancourt has spurred writers to dip back into the realm of fiction entirely. Such is the case with Stephen Gregory, who’s written three more novels and several short stories since Valancourt republished 1986’s The Cormorant – a masterpiece of the evil-bird subgenre – in 2013, and Philip Ridley, who rewrote In the Eyes of Mr Fury (1989) from scratch after Valancourt acquired the rights to it, “expanding the original novella to an epic,” says Jenkins. (It deserves the descriptor.) “Some of our other authors, like Bernard Taylor, Eric C. Higgs, and Craig Jones, hadn’t published anything new in decades but began writing and publishing again after our reissues sparked new interest in their work. So not only bringing back important lost works, but also causing new ones to be created, has really been exciting and gratifying for us.”

Where to Start With Valancourt?

Given the sheer quantity of titles Valancourt Books has published up to this point (over 500), not to mention their variety, it can be tough to find a place to start. To wit, here some tips from Jenkins and Hendrix for those looking for an entry point: