On sharing Jayro Bustamante's LA LLORONA with her Guatemalan mother. 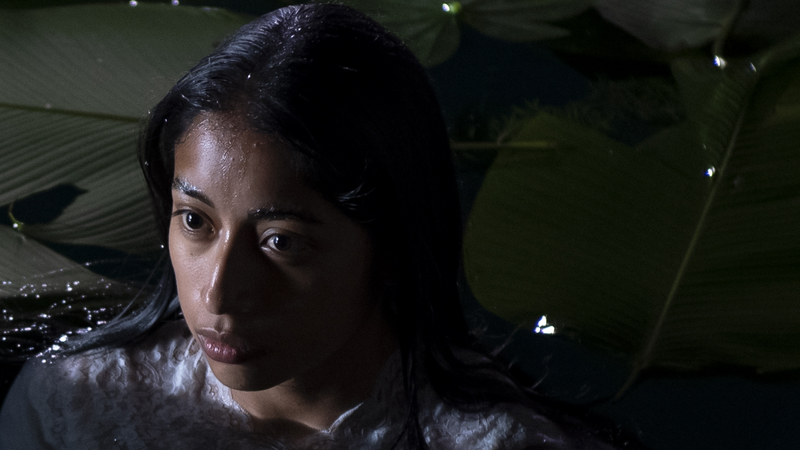 My mother has never willingly sat through horror movies with me, partially because it never appealed to her and also because my sister had once tricked her into watching Hostel by selling it as a movie about “two friends traveling across Europe." I think she was expecting something like Roman Holiday. She watched it through her fingers, to my sister’s amusement. By the time I was a full-blown horror fanatic, she expressed loving support but would sit out most movie viewings with me unless explicitly promised there would be no decapitations or drill maimings. This made it even more surprising when my mother called to ask where she could watch Jayro Bustamante's 2019 film La Llorona.

It’s no secret to me that she’d devour absolutely anything made by or starring anyone from her home country of Guatemala. Like many immigrants, seeing her fellow countrymen flourish in the US has always been held with pride, like the truest sign of success. It’s not really making it big until Americans start talking about it. She had never seen a Star Wars movie that she wasn’t dragged to, but the casting of Guatemalan-born actor Oscar Isaac made The Force Awakens hold new appeal for her. Now here she was, willing to watch another horror movie through her fingers after hearing the buzz about a movie set in Guatemala, directed by another chapín (the self-imposed nickname other Guatemaltecos give themselves).

“It’s cool to see horror coming out of Guate. I don’t think I’ve ever seen a horror movie made by chapíns before,” I passively commented, utterly unaware of how much I was missing.

“Your uncles made some of those movies, in the '70s. With some lucha guys," my mother said, like I wouldn’t have loved to know that information for as long as I’ve been breathing. I nearly dropped my phone as I started searching online for any information while we spoke. I typed one of the aforementioned uncle’s names into the search bar, Rafael Lanuza, holding my breath for a crumb of information. I immediately found a movie he directed, La Mansíon de las 7 Momias (The Mansion of the 7 Mummies), starring Blue Demon himself. I told her I still had a Blue Demon ornament on my Christmas tree. She asked me why I still had my Christmas tree up in February.

Lucha and horror have long been an intersection of my greatest pulpy passions. Starring masked luchadores like El Santo, Mil Máscaras and Blue Demon taking on vampire women, mummies, zombies and even La Llorona herself, many American audiences were first introduced to these films (if at all) via Mystery Science Theater 3000. But outside of that, they’re tough to find on demand these days save for some grainy YouTube uploads. I would lose myself in these worlds in which my Spanish-speaking heroes took on wolfmen in fantasies where people looked and talked like us. It was everything I loved about being Latina, mixing fantasy, comedy and macabre into the day to day. My uncle Rafael Lanuza cast his brother Claudio Augusto Lanuza, who had previously acted in Las Momias de San Angel. Claudio, formerly a professor, took his roles seriously, no matter how campy. As I watched 7 Momias with my mother, she spotted him as the mysterious disheveled man, trailing the film’s leading lady. She described how he prepared for the role, by letting his skin get tanned and weathered in the sun like he had been sleeping outside. He let his hair grow long and straggly. He and his brother took joy in blending the absurd with the haunting.

Latines have a long and storied romance with the macabre. We have holidays dedicated to hanging out on the tombstones of our ancestors. Most of our children’s folklore involves supernatural beings and end with unruly children being eaten, dragged into a watery grave or some other creative way to terrify children into going to bed on time or not talking to strangers. We have an intimacy with ghost stories and many my age still have the memories of watching pulpy news shows like Primer Impacto cover a story of a bridge collapsing and a Chupacabra sighting with the same degree of journalistic sincerity. Tales of El Cucuy and other figures were passed on to me by my grandmother. Ghost stories are in our DNA.

It’s not like we don’t currently have a massive stable of Latin talent creating horror. Growing up, I enjoyed the work of Guillermo del Toro, Robert Rodriguez and, of course, the aforementioned lucha horror. In recent years, we’ve seen incredible works from Issa Lopez, Gigi Saul Guerrero, Isaac Ezban and Demián Rugna, to name a few. Even as the current La Llorona is getting its well deserved critical acclaim, especially after its Golden Globe nomination for Best Motion Picture - Foreign Language, it’s far from the first depiction of the wailing woman in Latin cinema. Our culture’s macabre campfire stories have been haunting the silver screen as far back as 1933’s La Llorona, directed in Mexico by Cuban filmmaker Ramón Peón, making it the first horror film produced by a Mexican production company. She was depicted again in 1963 in La Maldición de la Llorona (The Curse of La Llorona) directed by Rafael Baledón Cárdenas, one of the producers behind Mexico’s golden age of cinema. It seems like every few years La Llorona cries “Ay mis hijos” to audiences, so why are we only seeing buzz about her depiction now? Frustratingly, for the same reason many first generation Latin-American horror fans are still digging up the films made by our ancestors: it doesn’t gain acclaim until American audiences say it does.

I’m personally very familiar with the American Measuring Stick that so often dictates your legitimacy. As I kid, I loathed a particular school project that required us to make a family tree. Unlike the kids in my class who could trace their ancestry to the Mayflower or Ellis Island, I could barely get information as far back as my great grandparents. When your family’s migration patterns are largely on foot, information gets lost. I was sitting there with my construction paper tree and its empty branches mocking me. “You have no history,” it felt like it was saying to me. When making La Mansíon de las 7 Momias, especially at the tail end of the Lucha-Horror movie boom in the late '70s, neither of my uncles expected their work to be discussed even a decade into the future, let alone written about. But as I opened up a copy of the book I had ordered to research for this piece, The Mexican Wrestler and Monster Filmography, I immediately flipped to the section where on a full page I found the poster for La Mansíon de las 7 Momias. Their names in ink, long after their passing, felt like a direct tether to them, connecting the branches on our family tree.

Horror was in their DNA, and now it’s in mine.