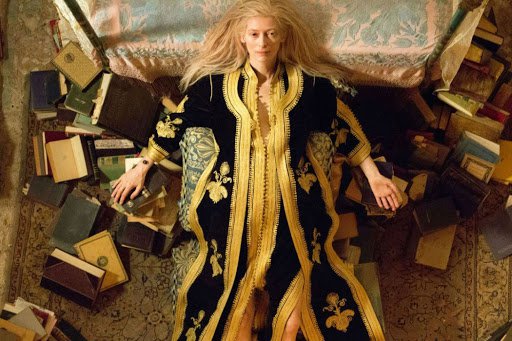 Editor's Note: This was originally published for FANGORIA on April 10, 2014, and we're proud to share it as part of The Gingold Files.

If the prospect of Jim Jarmusch directing a vampire film wasn’t intriguing enough, his casting of screen great Tilda Swinton as half of the central nocturnal couple absolutely seals the deal. Swinton and Thor/The Avengers’ Tom Hiddleston are perfectly cast in Only Lovers Left Alive, which the actress discusses (along with a few past and future fantasy roles) in this FANGORIA interview.

Only Lovers Left Alive centers on the literally immortal romance between Eve (Swinton) and Adam (Hiddleston), who begin the movie separated by continents. Adam is a reclusive musician and inventor who has developed a cult following among the humans he has come to disdain, and when it seems he may be planning to end his own life, Eve travels to his Detroit lair from Tangiers to console him. Their passionate existence is threatened by the arrival of Ava (Mia Wasikowska), Eve’s impulsive, reckless “sister”; also co-starring as the poet Christopher Marlowe—also a creature of the night—is veteran actor John Hurt (Alien, The Elephant Man), with whom Swinton also co-stars in Bong Joon-ho’s upcoming science-fiction opus Snowpiercer.

Is Only Lovers Left Alive the first vampire project you’ve been offered, or that you have pursued?

I had been discussing this film with Jim for a number of years, and I was also talking to Ulrike Ottinger about making a movie in Germany about the Countess Bathory. I’ve always loved vampire cinema and I’ve always wanted to make a vampire film, and to make one with Jim Jarmusch was just the best trip of all.

At what point during Only Lovers’ long development did Tom Hiddleston come aboard?

Tom was a great blessing to us. He came relatively late in the day, and that’s one of the reasons why we don’t mind at all that it took us eight years to make it, because if we had done it earlier, he wouldn’t have been a part of our band. In many ways, he had a tougher task than I, because I had been a part of the project from the very beginning, and Jim kind of wrote the film around me, and so the rhythm and the wiring of Eve are quite close to my own. Also, Tom is such a sweet person, such a sunny individual, that it was quite a task for him to play this grump, but he did it beautifully, and was so sweet. I love him; he’s my good friend.

I understand you’re very close to David Bowie; did he give you any advice on Only Lovers from having played a similar role in The Hunger?

[Laughs] Absolutely none! I’m looking forward to him seeing this film, but no, we’ve never spoken about The Hunger. But we are related by blood, obviously.

You worked on two very distinct locations—Tangiers, which is beautiful and exotic, and also in the worst parts of Detroit—

How did acting in those places inform how you played Eve?

You know, you don’t have to act anything if you’re on those locations. You just respond. The locations are the stars, and walking among those buildings, it’s a bit like walking between two mountains, or in the delta of a beautiful river. It’s a very natural environment, and I had a similar response to Detroit to what Eve has: I just saw nature everywhere, and it gave me such a good feeling. There are animals everywhere, there’s waist-high grass there, people are doing extraordinary things with living on the land; they’re making urban farms, they’re living without capital, they’re bartering, and there’s something very thrilling about Detroit.

How about Tangiers; were all those scenes shot on location?

Yes, absolutely, and Tangiers, in a very different way, is exhilarating; it’s like a sort of space station. You have people passing through from everywhere. It’s a little bit like the bar in Star Wars, where you have all those different beings from different planets. That’s like what Tangiers is like.

This was a real globetrotting production; was it well-financed as far as independent films go?

As usual, it cost much less than it should have. We were always needing more, but we managed to make it, which is the great triumph.

You have the great John Hurt as Christopher Marlowe—

How was that experience?

Absolutely wonderful. I had the great honor and pleasure, the same year we shot this film, to also work with John on Bong Joon-ho’s Snowpiercer. So I spent the year with John, and he’s one of my favorite people.

I’m assuming he plays a very different character in Snowpiercer; how was it seeing him in those two distinct guises?

Well, it’s funny you should ask that, because something really unfortunate happened. On Snowpiercer, John was playing an amputee, so he had this crutch and was hobbling around on it with his leg all sort of bent up behind him, and finding it very painful. And then when we came to shoot Only Lovers, he fell over and broke his foot, and so he was on a crutch for real. It was very bizarre and ironic and sad that, having complained so much about being on a crutch for Snowpiercer, he was then on one for real on Only Lovers.

He was very vocal about the way Snowpiercer was being treated by U.S. distributor The Weinstein Company; were you privy to any of that?

I was privy to all of it, and I’m extremely delighted to say that the Weinstein Company are wise enough to know that Bong Joon-ho’s version must be seen by all audiences. The American audiences deserve to see it in its full cut, so we’re delighted about that.

You’ve played a few supernatural characters, including the angel Gabriel in Constantine and the White Witch in The Lion, The Witch and the Wardrobe. Are you attracted to the possibilities that those roles offer you?

Well, the short answer is yes! But they’re all fantasies; it doesn’t really matter if you’re making a film about a housewife in the suburbs, it’s always going to be a fantasy.

When you did Constantine, how much inspiration did you take from the graphic novel?

Almost none, actually. I knew the graphic novel, but at the same time, it didn’t particularly inform what we were shooting. The look that we worked up for Gabriel was very distinctive.

That was the first feature by Francis Lawrence, who has since become a major-league director; how did he handle such a big project as his debut film?

I figured that he was a major-league director right there and then. I think he’s extraordinary, and Constantine is extraordinary. I’m thrilled that Francis, who’s another truly delightful person, is playing on a big stage, because he can do it, you know? He has a big vision and can absolutely orchestrate the kind of paraphernalia that those big films employ, and he was showing that already with Constantine. I was always sorry there was never a Constantine sequel. There was a lot of discussion about it, and obviously the numbers didn’t add up, but we were all very much in love with that film.

When you did Constantine and The Lion, The Witch and the Wardrobe, you worked with a lot of makeup and special FX to help bring your parts to life. In Only Lovers, you play a kind of fantasy character, but with no makeup or FX involved. Was that a different kind of experience?

Yes, it was. I mean, I love all the special-effects stuff; I’m very nerdy about it all. I love the way those experts run onto the set and show you some amazing new program they’ve just invented before lunch to make Brad Pitt get younger [for The Curious Case of Benjamin Button]. I just love all that. The big studio films I’ve made have all been with fellow film techno-geeks like David Fincher or Francis Lawrence, or Spike Jonze, actually—people who really get in amongst the technology and make it work for them. They’ve been what I call my experimental films, because the spirit of experimentation, in my experience, has always been very alive on those sets. They’ve had this sort of cutting-edge feel.

And yet those are the biggest-budget films you’ve done, in some cases.

Absolutely; they’re the ones that have good reasons to be big-budget, in my view.