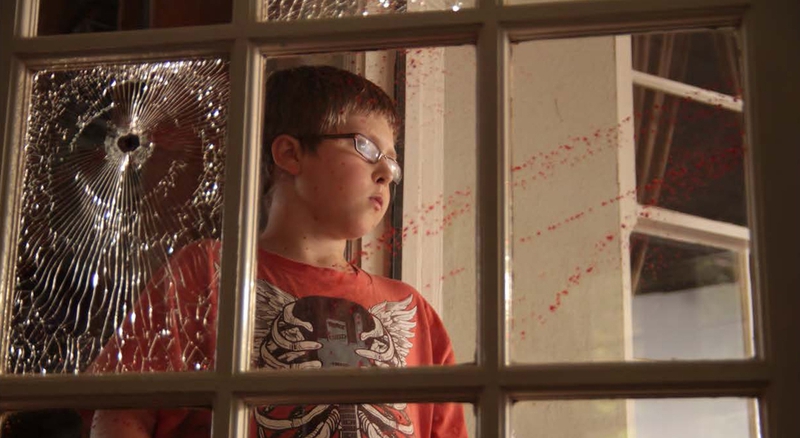 Editor's Note: This was originally published for FANGORIA on January 11, 2016, and we're proud to share it as part of The Gingold Files.

As we continue to look back at the year recently concluded, attention must be paid to the short films that made their way around the fest circuit. And there’s no better sampler than a look at those minimovies that played in the Small Gauge Trauma lineup at last summer’s Fantasia festival in Montreal, many of them making world or international premieres. Small Gauge Trauma has always been an excellent sampler of what this particular film scene has to offer, and the 2015 crop was no exception.

A Boy’s Life, by Howard McCain (pictured above): This may be my favorite of the bunch, as it encapsulates the best possibilities of short-form filmmaking—giving us a simple setup and payoff that are rich with dark drama and genuinely surprising. The movie seems like it’s about one kind of horror, and then turns out to concern something very different, neatly realigning our expectations and our sympathies with one revelation. Nicely shot, too, conveying a sense of melancholy and tragedy without any fuss or overstatement.

The Stomach, by Ben Steiner: If Ben Wheatley in Kill List mode made a sequel to Videodrome, it might look like this mélange of the horror and crime genres. Featuring a wild, unique variation on the idea of communicating with the dead, it’s both morbidly funny and squirmingly visceral (great makeup FX by Dan Martin), and from its opening moments, you won’t have any idea where it’s going.

The Shutterbug Man, by Chris Walsh: Small Gauge has always had a soft spot for stop-motion; this year’s entry is a black-and-white introduction to a pretty creepy character. The craft on view here is skillful and evocative, enhanced by the choice of Barbara Steele as narrator. And yet, I couldn’t help thinking this particular concept might have had even more punch had it been conveyed in live action.

The Blood of Love, by Jeff Meyers: The age-old question of how far you’d go to preserve a life you cherish gets its latest modern spin, with Mali Elfman (yes, Danny’s daughter) playing a young woman who’s more than willing to sacrifice others to extend her husband’s existence. Unfortunately, his resurrections are briefer each time… Meyers maintains sympathy for his heroine’s plight even as she commits unspeakable acts, keeping us caught up in her increasing desperation, and builds to a wicked if inevitable twist at the end.

Heir, by Richard Powell: The “eewwwww” factor is high as a father takes his son to a “play date” with an old college pal that’s unsavory to start with and gets more grotesque as it goes along. Powell handles potentially exploitative subject matter with a certain amount of restraint for the most part, with plenty of uncomfortable intimations, and makes good use of the ubiquitous Bill Oberst Jr.’s creepy talents as the dad’s friend. In fact, it’s such a strong exploration—and indictment—of behavioral horror that the inclusion of explicit slime-monster FX in the second half feels a little misjudged (though the special makeup by The Butcher Shop, even in tight close-up, is first-rate).

Feeder, by Christian Rivers: A longtime member of the Weta FX team on blockbusters like King Kong and the Lord of the Rings and Hobbit epics, Rivers makes an assured directorial debut with this tale of a modern, horrific Faustian bargain, as a songwriter sells his soul for rock ’n’ roll. The particular process by which he does so is imaginatively conceived, and results in numerous moments of horror and black humor. Animal lovers need not necessarily apply, though…

Slut, by Chloe Okuno: While the exploration/inversion of gender roles suggested by the title doesn’t amount to as much as one might hope, this recasting of the Little Red Riding Hood fable as a ’70s-era psycho saga is quite skillfully done. Shot as an AFI thesis film, it demonstrates Okuno’s talents at both capturing small-town atmosphere and staging violent action, and showcases a sympathetic turn by Molly McIntyre as a nice girl whose attempt to make herself over in the mold of the town tramp brings her the wrong kind of attention.

Skuld (Guilt), by Heidrik á Heygum: The longest of the selections at nearly a half hour, this Danish production is suffused with the region’s trademark gloom as it centers on an in-home nurse whose own past traumas resurface to plague her. Although the trappings are familiar (right down to a cat-scare), Heygum nonetheless elicits sufficient sympathy for his increasingly haunted heroine, and his shadowy visuals and fine use of locations (on one of the forbidding Faroe Islands) leave a lingering chill as this fine showcase for up-and-coming auteurs concludes.