THE KINGCAST Is Headed To Maine For The BANGER IN BANGOR

Featuring a Stephen King tour, special guests Mike Flanagan and Kate Siegel, and a live recording of the show!

We've had a lot of fun with THE KINGCAST ("A Stephen King Podcast For Stephen King Obsessives") over the past two years. We've spoken to some of our favorite authors, musicians, actors, and comedians. We world premiered a bizarre pseudo-Stephen King-adaptation called Timekeepers of Eternity at last year's Fantastic Fest. We screened Sleepwalkers alongside Mick Garris at this year's Overlook Film Festival. Hell, we even had Stephen King himself on the show.

But for a long while now we've had an idea that we've been dying to execute. This October, we're finally gonna do it, and we want you to come along for the ride... 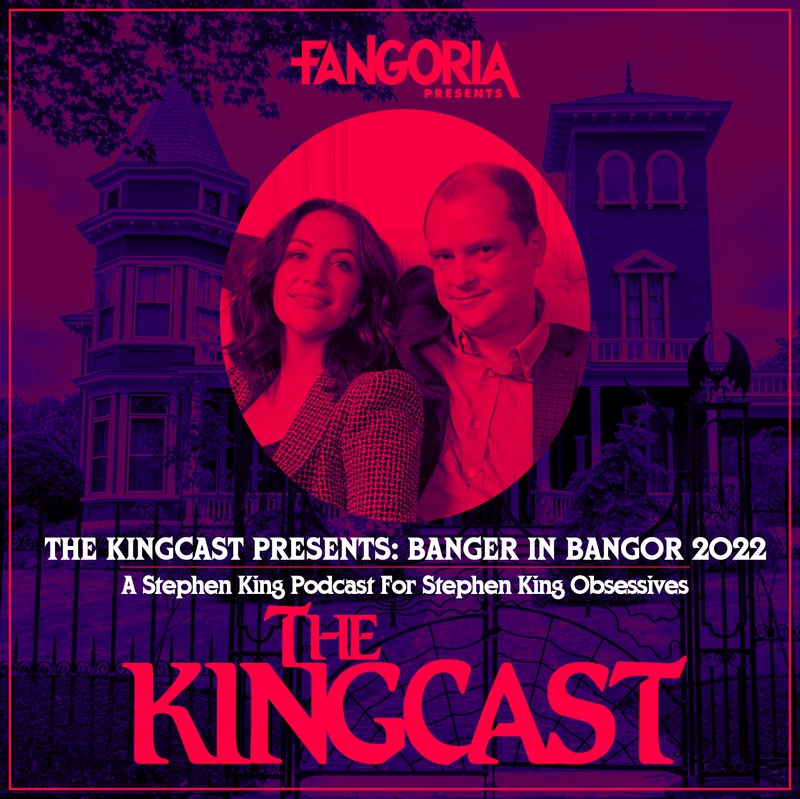 This October, we're taking THE KINGCAST up to Stephen King's stomping grounds in Bangor, Maine for an event we're calling the "Banger in Bangor." This two-day event begins on October 14th, and VIP tickets (which are highly limited) will include a Stephen King tour of the city via the good folks at SK Tours, an invitation to join the KINGCAST hosts for dinner at a Stephen King-related location to be revealed on the day, and a live recording of the show the following evening at the Bangor Arts Exchange. In attendance: Gerald's Game and Doctor Sleep director Mike Flanagan and Midnight Mass star Kate Siegel, both of whom will be joining us for the tour and the recording.

VIP tickets for this event will cost $200, and include everything mentioned above along with an exclusive, event-specific screenprint by KINGCAST art director Daniel Danger, a poster signing with Flanagan and Siegel, and reserved seating at the live recording on the 15th. As mentioned above, the VIP tickets are limited (turns out you can only fit so many people on two busses, who knew?), but don't worry if you don't snag one! Advanced tickets just for the live recording will also be on sale for $35, and those posters I just mentioned will be available for individual purchase at the event.

Tickets for the Banger in Bangor will go on sale next Friday. On Thursday, KINGCAST Patrons in the "Gunslinger" tier will get an early shot at snagging some of those VIP tickets, but we'll make sure the entire run doesn't sell out before the sale goes public. First come, first serve on those, folks.

We're so excited to head back to Bangor for what promises to be one hell of an event, and we hope to see as many of you as possible out there! Follow THE KINGCAST on Twitter for further updates as they roll in, get your bags packed in the meantime, and standby to snag your tickets next Friday. We've got an adventure to attend to in October!