Celebrating the GOAT. Break out your pens and best stationary! It's time to show our beloved Creature some love. 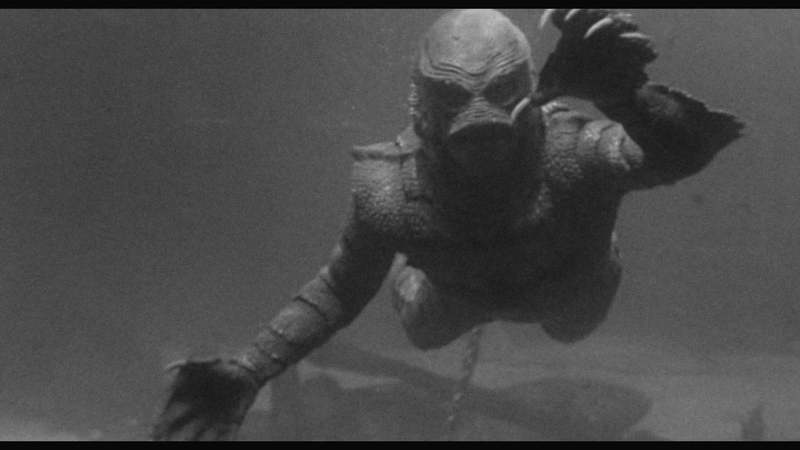 Ricou Browning as THE CREATURE

A few weeks ago, word circulated Ricou Browning needed cheering because his health was in decline. “Any hard copy letters or get well cards would be very appreciated,” said Ron Adams of Monster Bash after Ricou’s daughter reached out to him.

That news shocked me. Granted, Mr. Browning is 91 and he’s lived a life full of adventures that would have killed me, but when I recently met him in person he was so vivacious, I couldn’t quite grasp the fact that he was sick, let alone that he is mortal.

My thought processes defended: the Creature from the Black Lagoon is immortal. Nothing can harm it, not really. It’s untouchable. I thought not only of the film itself, for its classic status has only become more cemented as the decades tick past, but the facts are beyond contestation: everyone knows the prehistoric origin and the immortality of the Creature itself. Himself. That’s what makes the Creature so mysterious and unfathomable, that he existed before us, and he will exist after us. 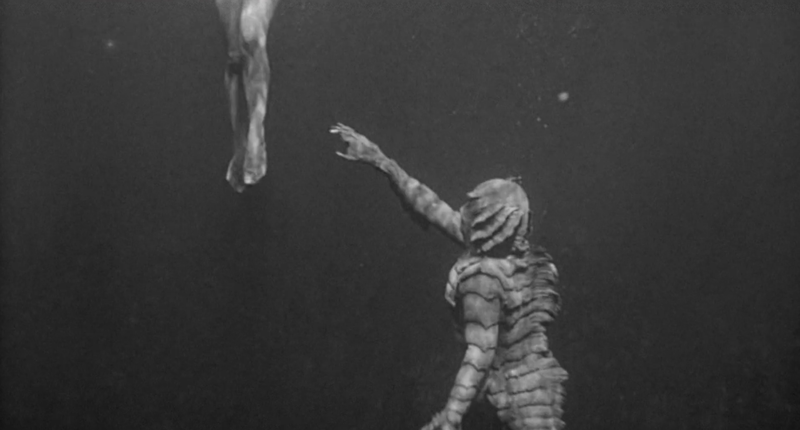 Ricou Browning is the original actor who played the Gill-man, the titular Creature of the Creature features. That is, his portrayal of Gill-man is one of many magical accomplishments of his lifetime, and perhaps the most famed. So much of Browning’s repertoire seems impossible to us mere mortals. When I had the chance to meet him nearly three years ago at Days of the Dead in Atlanta, the stories he told in that ballroom had me white-knuckling the folding chair in front of me, forgetting to write down what I was hearing.

For example, when someone asked, “How long could you hold your breath?”, he replied that he never really measured it, but then his daughter, Renee, answered. She sat beside him throughout the panel and questions, repeating them to him because he is hard of hearing. She said, “People who worked with him said that he could hold his breath for up to four minutes if he was still. He won’t brag about it, but that’s what the people who worked with him said.” He added that before OSHA regulations, the way he signified that he needed more oxygen was to “go limp.” After every astonishing anecdote (for example, the one where a snapping turtle bit off the foot of Gill-man’s costume, and he had to chase it to get it back), he finished with, “And that worked pretty good.” As nonchalant about his wild feats as if anyone could be this amphibious if they just worked hard and believed in themselves. 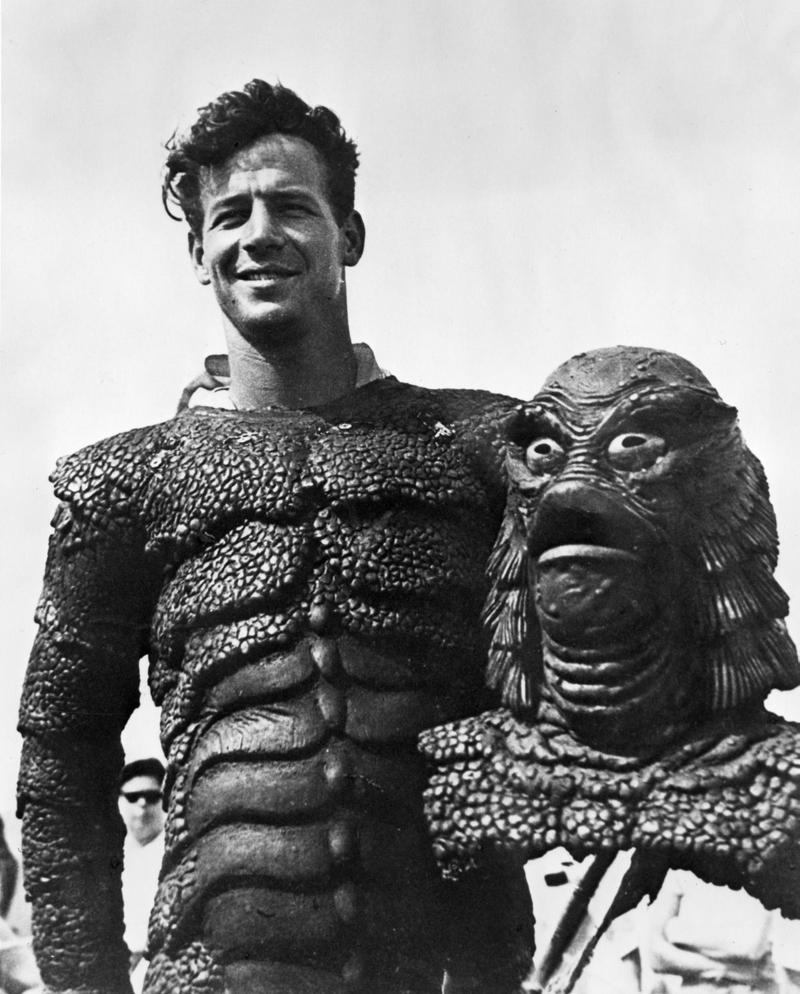 His humility had us staggering because human beings shouldn’t have the capacity to do the things he did. It seems death-defying. It seems superhuman. It’s pretty sexy. (Have you seen his photo? That’s a commitment, to put a mug like that behind a mask.) I’m not alone in thinking the idea of a prehistoric, immortal Gill-man is desirable, either. Guillermo del Toro is on record as saying the scene of Gill-man stalking Kay Lawrence underwater is the inspiration for his award-winning film The Shape of Water. “The creature was the most beautiful design I’d ever seen,” he recalls. “And I saw him swimming under [actress] Julie Adams, and I loved that the Creature was in love with her, and I felt an almost existential desire for them to end up together. Of course, it didn’t happen.” That is, until del Toro reincarnated the character into his own film. In fact, the costume underwent at least two revisions because 1. the fishy lips weren’t kissable, and 2. his butt wasn’t cute. (Browning even says the original Gill-man costume had to be revised to look more amphibious, less lizard-like.)

When I asked Mr. Browning if he knew his role was the inspiration for The Shape of Water, he said, “I saw the movie, and I talked to the director on the phone. He’s a really nice guy, and I said I thought he did a great job directing it, but it was a terrible movie… they meet, and they have sex, and that’s it. He should have put that at the end of the movie instead of right at the beginning.” He said Guillermo del Toro agreed with him over the phone, too, but he said, “I already made the movie.” 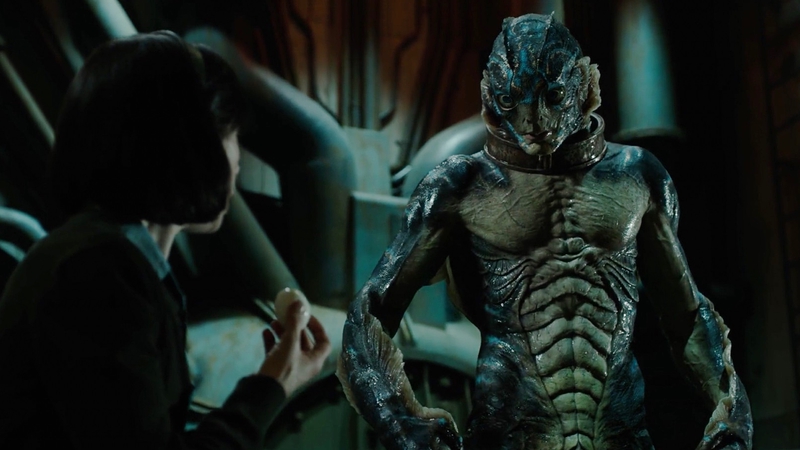 And speaking of The Shape of Water, Browning also said that he and Doug Jones are good friends: “He called me when he started doing the role.”

in the world of horror, homages to the Creature are all around us. In every creature feature from Jaws to Cloverfield, the Creature is revealed little by little. The hybrid beast who falls in love with a human (though the trope existed before Black Lagoon, certainly) presents itself in fairy tales and horror alike.

What rings out as I write this homage to the immortal Creature is that during the panel, Browning also said that the Creature should have died—“she doesn’t turn into a fish. She would have drowned. And [the Creature] got shot so many times he should have died.” The right way to end it, according to Browning, was that “he pushed her up to the surface, and then he dove back down into the water to die.” That’s nearly what happens at the end of The Creature from the Black Lagoon. 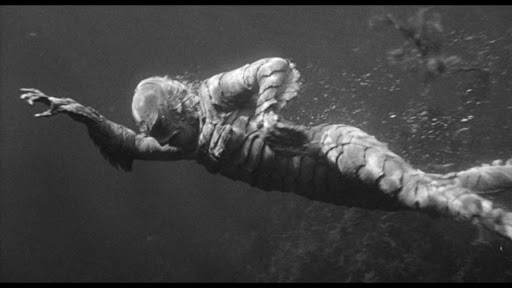 The exception to the narrative is that while the first feature film ends with the bullet-ridden creature sinking motionless to the bottom of the lagoon… there are two more films. That further supports my idea that the Creature is, in fact, immortal. Or, at the very least, we will not let him die. We will constantly turn back and reach toward this gold standard of immortality. If not because it is immortal, then because we need to believe it is. So, with all respect, Mr. Browning, you’re wrong: the Creature should not have died. On principle, it never will.

Humans can hardly bear the idea of our own mortality, let alone that we are not the protagonists of our own story. The idea that an amphibious creature could be our evolutionary predecessor, that human beings are an error of nature, that we are a maladapted beta version of an amphibious prototype, the design of which is fairly perfect, is what makes him scary. But isn’t the Creature immortal? Even if not in a single iteration, he continues to be reborn in new forms, and always will be.

As the original post requested, I’ll reiterate here that we should all send our love letters to Mr. Ricou Browning, the surviving original Universal monster.

Please cheer him up with a card or letter addressed to:

Get something out for our Gill-man...it would make him happy.