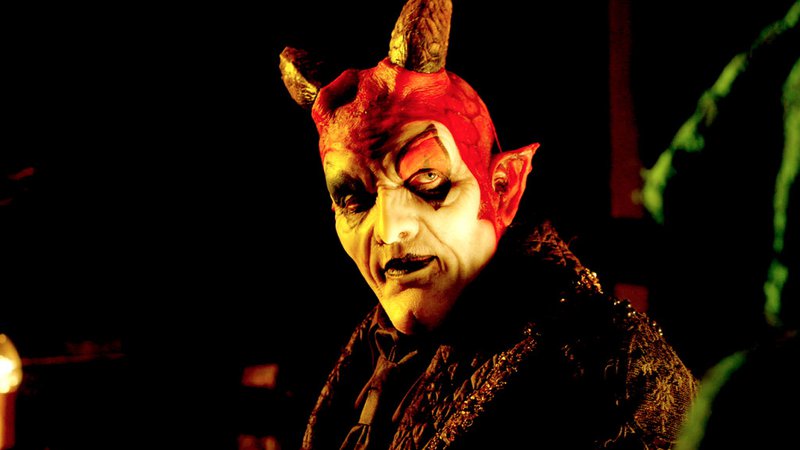 Editor's Note: This was originally published for FANGORIA on May 3, 2012 and we're proud to share it as part of The Gingold Files.

As The Devil’s Carnival enters the last leg of its Road Tour, in which director Darren Lynn Bousman, scripter Terrance Zdunich (who also plays Lucifer) and their cohorts are traveling the country screening their horror musical as part of a multimedia show (see review here), Fango sat down with the duo at their New York City stop at Times Scare. The duo discuss the experience, plans for Carnival follow-ups and the director’s upcoming features The Barrens and Ninety.

How has the New York experience been?

DARREN LYNN BOUSMAN: It’s insane. Normally we do one show a night. We’re doing two shows tonight, and we got pulled over on the way here, so that threw us off about an hour. The minute we drove into New York City, we were pulled over and had three cops surrounding our van. It was pretty bad; seeing [associate producer] Spooky Dan in Times Square driving a big white van may not be the best thing [laughs]. But otherwise, it has been great. The fans are great, the venue’s amazing. This is punk rock filmmaking, so you never know what you’re gonna get. We had no idea what this place looked like until the minute we got out of the van.

So no one scoped out the venue for you?

BOUSMAN: We looked at the website, and all we saw was the front marquee, and we were like, “All right, Times Scare. Sounds good to us.”

Were you aware this used to be a peep show palace? It was called Show World; you can see it in Romano Scavolini’s Nightmare.

BOUSMAN: All right, man! There you go! No, I did not know that. You learn something new every day.

Over the course of the tour, what’s the craziest thing you’ve seen or experienced?

BOUSMAN: Every aspect of it is pretty crazy. The mere fact that we’ve been able to get this kind of reaction and turnout all based on Twitter and Facebook is insane. The idea that people would pay money to come see something they know very little about, and that there’s no marketing scheme behind—we don’t have anyone out there promoting this film except us—that’s a testament to our fans, the Repo! community. That’s the faith they’ve put in us as filmmakers. We have some die-hard followers. As you can see right now, they’re dressed up, getting crazy, coming out and showing their colors. It’s pretty amazing.

You made The Devil’s Carnival in record time. You started shooting in January, and here you are less than four months later, and you’re halfway through the tour.

BOUSMAN: Yeah, we wrapped around the 22nd of January. We started post two weeks later and finished that February 26, and I was doing the mix the first week of March, and now here we are in April. There was no time, and it was awesome, because I didn’t have a chance to second-guess myself. It was like, “This is it.” I think a lot of films start off great but become bad due to too many cooks in the kitchen trying to give their ideas and oversimplify: “Well, maybe the audience isn’t going to understand it.” This was a chance for us to not have any of that bullshit. It was just like, “This is the first edit, this is it—we’re going out with it.” And we shot the movie in one take.

Even all the choreography and song performances?

BOUSMAN: Some songs took two or three, but we shot the whole movie in seven 10-hour days. It was a crazy experience. Something like this really needs two, maybe three weeks to do.

How long was Repo!?

That’s what you would assume Devil’s Carnival took. It’s not feature-length, but it’s still an hour-long musical.

BOUSMAN: Yeah, it’s only 14 minutes less than one of my other films that was feature-length. In retrospect, I should’ve added 14 minutes to Devil’s Carnival and released it as a feature! But I think it’s cool, what we’re doing: taking it to the fans directly.

Where does it go after the tour as far as DVD or any other kind of release?

BOUSMAN: The hope is that we can do 20 more of these [movies]. We’ve written numerous ones, but it all depends on whether we can recoup our money. We’ve spent a small fortune on this—not in the grand scheme of movies, but in the grand scheme of it coming out of a couple of guys’ bank accounts. So we have to recoup that money. And even the tour’s expensive as hell, because we’re seven people, seven hotel rooms every night, and so we have to recoup not only the film’s budget, but the budget for the tour. Once we do that, the minute we recoup, we’re going to greenlight part two, and we’re going to put DVDs out. We’ve just got to get to that point.

So the script for part two is finished?

TERRANCE ZDUNICH: Yes. I wrote a first draft of part two, but we’ve been talking, and it looks like part two may become part three. You know how it goes when you’re writing, but the honest answer is this: This is a world that deals with both heaven and hell, and 99 percent of this particular episode is in hell, with only a glimpse of heaven. If we continue the series, heaven will be just as explored as hell, and you’ll get to meet heaven’s carnies the same way you met hell’s carnies, and learn more about the relationship between the two worlds, and particularly how they collide.

[At this point, a box of Devil’s Carnival soundtrack CDs is brought over, and Bousman starts signing each one.]

BOUSMAN: I’m going to say this right now: We basically show up to a city, and we have to sign hundreds if not thousands of things every night, before anyone comes in.

ZDUNICH: And I was in the back of the van on the way over here numbering these things, and it’s cramped. So this is the unglamorous part, the punk rock part: You’re sitting in the back of a van while it’s moving, and you have motion sickness and you’re underslept, and you’re breathing Sharpie fumes, which are noxious in a van with no windows. But at the same time, it’s kinda rad, because we’re here and getting to share our art in very real time with an audience that is expecting a lot from us. So there’s a lot of pressure, but they’re here and we somehow pulled it off. It’s crazy. We shot this in seven days and recorded the majority of the music in one day, and while it certainly doesn’t look like John Carter or something, I don’t think you would look at this and think it was a seven-day shoot.

Not at all, which leads to my next question. Obviously, you had a lot more time to work on the writing; how long was the process of getting the script and the music to a place where you were ready to shoot?

ZDUNICH: From the moment where it was like, “This is the direction we’re going in,” about two years. But keep in mind that two-year process was all about discovering the language of what this world is. So future episodes, I hope, won’t take nearly as long. It was really a process of discovery, trying to find the language of the music, the language of the characters and how that worked. And it wasn’t your normal script. It needed to sing, quite literally.

When it started off, the concept was nursery rhymes—basically things that feel like they’re for kids—but upon multiple listenings they become more and more subversive. And Aesop’s fables were a perfect vehicle for that. So it was kind of like, what is the musical aesthetic of that—as simple as a nursery rhyme, yet as complicated as morality. And once we discovered that language, it started moving along quicker. Heaven will have its own language, which will be very independent from hell; the notion is that it sounds like a grandparent’s music, whereas hell is kids’ music. But that said, in this universe, your grandparents’ music is still pretty edgy [laughs].

Darren, where are you with The Barrens at this point?

BOUSMAN: The Barrens is finished; we turn it in tomorrow. This is how crazy it is: I shot The Barrens, and then I came home, and before I started editing, I shot The Devil’s Carnival. I then went and edited The Barrens, and then we quickly edited The Devil’s Carnival, and no one knew about it—we were doing it under the radar. I’m touring this as they’re finishing post on The Barrens, which is being turned in Friday morning to the studio. I’m very proud of it. It’s a very different movie from what I’ve done before. It’s The Shining meets Jaws in the woods. So it’s a monster movie, but it’s not like a classic monster movie; it’s my version of a monster film.

Can you say a little about what makes it unique?

BOUSMAN: There were two approaches I could’ve taken on it. It’s basically about Stephen Moyer being pursued by a monster in the woods—the Jersey Devil. However, what makes it different is that it’s more about his relationship with his family, and happens to have a creature in it. So instead of making a monster movie with a human element, it’s a human story that happens to have a monster in it. It plays itself out as a drama with a monster in the background. I love that, where instead of the creature being the A story, it’s the B story, and the human interaction, the human elements are the A story. I always wanted to make a movie where it’s engaging enough without the monster, but then that’s added in. So that’s my next step. And then, hopefully, Road Tour number two; we’re gonna go to the UK with this.

What about Ninety; is that still happening?

BOUSMAN: I hope so. It’s one of those movies that’s cast-dependent. They want big names—Gerard Butler names. So we’ll see. It’s a great script by Scott Milam, who wrote Mother’s Day. Ninety kills in 90 minutes—you can’t get better than that. And unique kills; it’s not like they’re all grouped together—it’s 90 individual kills.