Cronenberg is alive and well, but you can watch him confront his own death (and corpse) in this new short film. 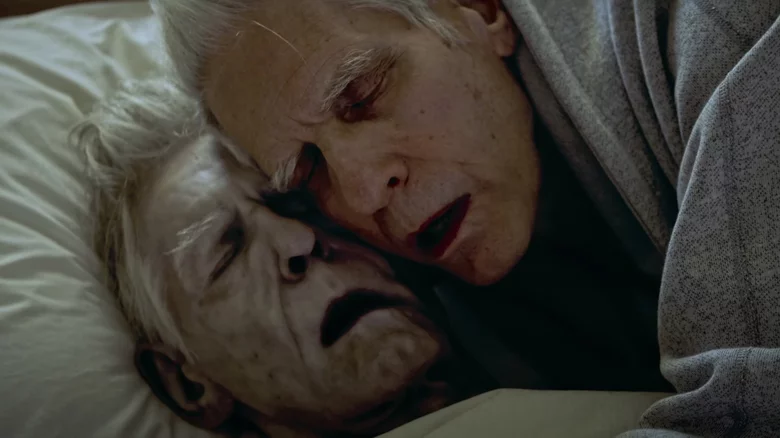 There's a new Cronenberg film hitting screens and we aren't talking about Crimes of the Future. While Cronenberg's audience are no strangers to the strangeness in his body of work, this new short film may be (one of) the strangest yet. Strange, of course being used in only the most complimentary fashion in this instance.

His reaction isn't one of horror, but rather an extreme tenderness. He leans down to softly kiss the cheek of his shell. The dummy standing in as Cronenberg's double is life-like enough to be slightly jarring; when he puts his weight on the bed it moves with the heft and consistency of a person. The two curl up together, in a tender embrace. The movie ends on a closeup, the two Cronenbergs cheek to cheek, the live Cronenberg's face a replica of the death mask frozen on the corpse. Haunting but beautiful.

The short film is available to stream on Super Rare, but you can take it a step further and actually bid in the auction to own the movie. The short is being auctioned off as a digital token, an NFT. If you're wondering why someone would pay top dollar to own this when anyone can stream it in full right on the very same page the auction is taking place, here's a quick write-up from Super Rare, briefly explaining the world of NFTs and digital tokens. Here's the description from the Super Rare site:

“The Death of David Cronenberg” is a short 1-minute film written by and starring filmmaker, screenwriter, and actor David Cronenberg. “The Death of David Cronenberg” features the subject standing in a small, softly lit room. He wears a robe and looks deeply into the camera before his gaze shifts to a motionless figure in a bed. The film, a collaboration with Cronenberg’s daughter Caitlin, who shot and produced the film, explores mortality, surrealism, and the metamorphosis of life and death. David Cronenberg is best known for exploring themes of bodily transformation, technology, and infection in films such as Shivers (1975), Videodrome (1983), and The Fly (1986). He has directed over 20 films, written more than half of them, and acted in several others. His name has appeared on numerous “greatest director” lists including from Strange Horizons and The Guardian.

Watch the short now on Super Rare, and if you're so inclined, place a bid while you're at it.