Get the scoop from the press event on this universe-expanding new comic. 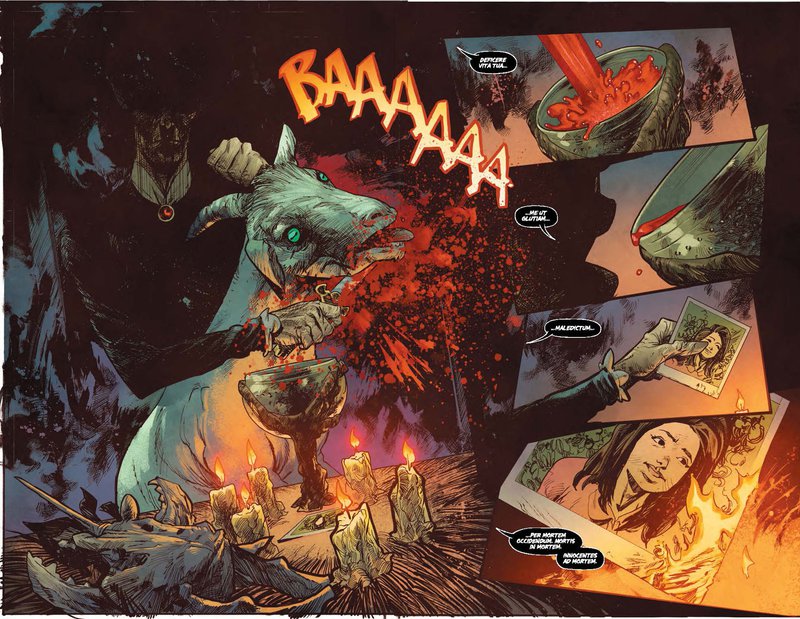 June 1 marks the official launch date of the all-new DC Horror imprint with the first issue of The Conjuring: The Lover, a five-issue monthly limited series that serves as a prelude to The Conjuring: The Devil Made Me Do It. The horror mystery, co-written by Daniel Johnson-McGoldrick (The Conjuring 2, Orphan) and Rex Ogle, follows a struggling college student that discovers an evil entity that made her its latest target. This limited series also features secondary stories, titled Tales from the Artifact Room, that explore the haunted items within the dreaded artifact room of Ed and Lorraine Warren from The Conjuring Universe.

The Lover's structure draws influence from EC Comics, both in its dual stories per issue and the Conjuring themed ads bridging them. Writers Johnson-McGoldrick and Ogle looked to their childhoods for inspiration once DC Comics editor Katie Kubert enlisted them for this new launch. Johnson-McGoldrick stated, "When Katie first brought up the idea of doing The Conjuring comic, the first thing that we had to decide on was what does that mean? What is a Conjuring comic book? For me, I was immediately flashing back to House of Secrets, House of Mystery, and EC. I grew up with The Twilight Zone Gold Key comics. Those old horror comics, particularly and coincidentally from the period that we're talking about in the film, 1981, there was an almost illicit quality to those horror comics back then, especially with the EC ones. They were having hearings in Congress about EC and what those were doing to our kids.

"Growing up with a horror comic, that was part of what was fun about it," he continued. "I really wanted to work with these guys to figure out a way to capture the nostalgia, but also that you-never-know-what-you're-going-to-get aspect of those old horror comics, because who's going to be writing this one? What stories are going to be in it? You don't know. It's a grab bag. And I feel like we've managed to capture that.”

Kubert expands on the grab bag feel of this limited series: "In the first one we talk about the Ferryman mask [from Annabelle Comes Home], and writers Scott Snyder and Denys Cowan were able to make almost this [a] Twilight Zone, Creepshow love letter. As we go through the series, you'll see we also touch on a few other horror genres with the other stories, giving readers more of what they want and expect, just not in ways that they're expecting it."

The Lover's main storyline expands on a character that does pop up in The Devil Made Me Do It, one that Johnson-McGoldrick wanted to explore further beyond what the film's runtime afforded. He explained, "Before we ever knew that there was ever going to be a comic book, we had this untold story that the Warrens come in after the tail end of, because they're finding out about everything that happened after the fact. It was something that, in the film, we always wished we had the real estate to tell her story. So, when we found out we were doing this, I just immediately raised my hand, 'Let's tell the story. Let's tell the story of Jessica,' because, otherwise, we were never going to get that chance."

While this expansion serves as the comic's focal point, the exploration of the artifact room through side stories opens up the Conjuring universe even more. Kubert teases how fans may get to see stories behind haunted objects only glimpsed in the films: "That's been fun with approaching different creators and different talent for the tales from the artifact room. We've gone to different teams for each one, asking, 'Here's a few items that you see in the room. What kind of stories inspire you for which one?' We would basically take those ideas and run them through New Line and run them by James Wan."

Ogle added, "I felt like New Line gave us a ton of freedom. David wrote this amazing script that had this C-plot that we could pull out and make almost a prequel to Conjuring 3. I mean, for me, going back and rewatching The Conjuring movies was just a total blast. So, in a way, it's like the homework that I had to do was something I wanted to do anyway. I mean, I had a blast."

The Conjuring: The Lover works as an extension of an unexplored plot thread in the upcoming sequel The Conjuring: The Devil Made Me Do It and offers new, original stories based on the infamous artifact room while invoking the nostalgia of yesteryear's horror comics. Kubert sums up this ambitious project even better: "The title The Lover is very specific to the story that Rex and David have built. However, it's also an ironic title because the series is such a love letter to the horror genre, and you can see that not only with the ads that we're building but with the backup stories in the artifact room and with the variant covers."