Waterbeds Remain A Menace In THE CONJURING: THE DEVIL MADE ME DO IT Trailer

The Warrens are about to get into some real dark stuff.

THE CONJURING: THE DEVIL MADE ME DO IT photo courtesy IGN

This morning we got a pretty unnerving trailer for the latest entry in the Warrenverse, The Conjuring: The Devil Made Me Do It. (More sequel titles like this, please!) But first, check out a bunch of new images and an interview with director Michael Chaves over at IGN.

This looks great, legitimately scary – I gasped at the cliff scene, and I'm obsessed with the idea of an '80s-set supernatural film using a waterbed as a setpiece – while continuing the warmth and empathy that Vera Farmiga and Patrick Wilson have brought to The Conjuring films. We've also got some great new additions to the world: budding scream king Julian Hilliard (The Haunting of Hill House, Penny Dreadful: City of Angels, Color Out of Space) and John Noble, who is terrific in everything and looks to be delivering his spooky weird wisdom once again in this project.

The script, written by The Conjuring 2's David Leslie Johnson-McGoldrick, is based on the trial of Arne Cheyenne Johnson, known as the "Devil made me do it" case (apropos title, then), or "the first known court case in the United States in which the defense sought to prove innocence based upon the defendant's claim of demonic possession and denial of personal responsibility for the crime." I won't read any further than the first line of that Wikipedia page lest there be spoilers for the film, but wow, what ripe soil for a story! And, according to that IGN interview, Chaves says it's also "the biggest Conjuring movie... the darkest Conjuring movie," with producer and franchise founder James Wan coming to Chaves and telling him, "'It's Se7en, but in the Conjuring universe.' And he knew that was like catnip for me."

I can't wait! But I gotta, because The Conjuring: The Devil Made Me Do It comes to theaters, IMAX and HBO Max on June 4th. Also very into this retro, Douglas Sirk-style poster for the film: 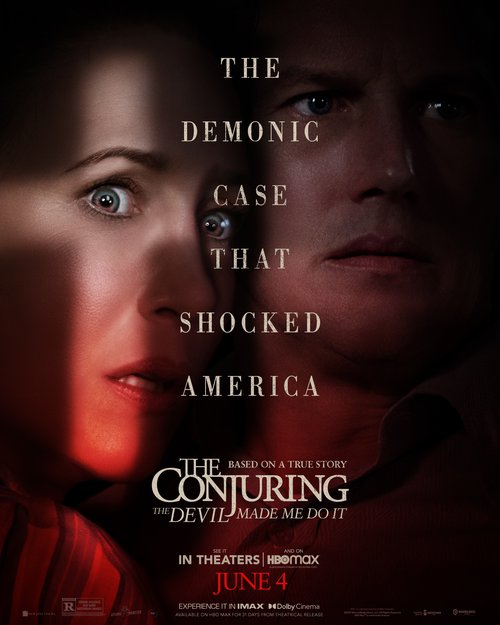