All we want for Christmas is a rampaging robo-Santa. 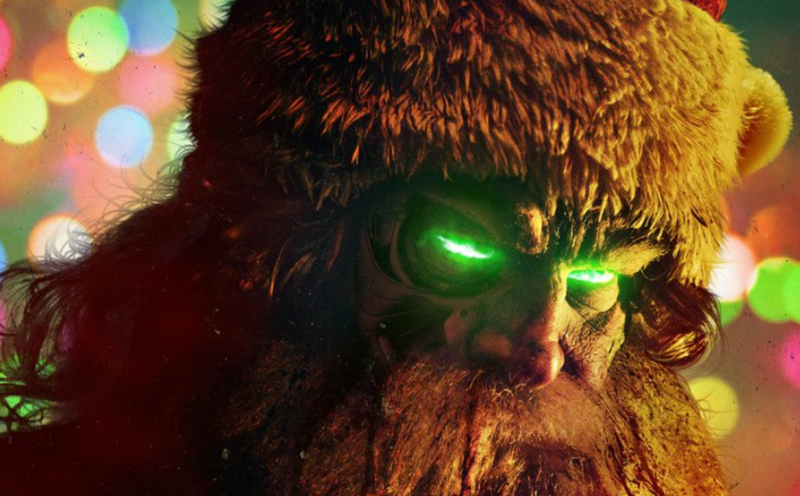 Next month, Joe Begos' Christmas Bloody Christmas will finally deliver the holiday horror film we've always wanted: one wherein a murderous, laser-eyed robo-Santa goes on a bloody rampage. You can keep your ill-advised sequel to A Christmas Story, your annual It's a Wonderful Life screening, and your Love Actually rewatch parties. This is the one we've been waiting for.

The film, which hits theaters (via RLJE Films) and Shudder on December 9th, just got a brand-new poster. Here's Begos revealing it on Twitter just a little while ago:

In fucking LOVE with this theatrical poster for CHRISTMAS BLOODY CHRISTMAS

Love it. Love the glowing eyeballs, love the tagline ("YOU BETTER NOT CRY"), love how delightfully bonkers the whole goddamn concept is. Speaking of, here's an official plot synopsis, via Bloody Disgusting:

"It’s Christmas Eve and fiery record store owner Tori Tooms (Riley Dandy) just wants to get drunk and party, until the robotic Santa Claus at a nearby toy store goes haywire and makes her night more than a little complicated.

Santa Claus begins a rampant killing spree through the neon-drenched snowscape against a backdrop of drugs, sex, metal and violence, ultimately forcing Tori into a blood-splattered battle for survival against the ruthless heavy metal Saint Nick himself.”

As previously mentioned, Christmas Bloody Christmas will be available to stream (via Shudder) or catch in theaters (via RLJE Films) on December 9th. That's precisely one month from now, which means you've only got that long to weasel your way onto robo-Santa's Nice List. Everyone else? You're screwed, this Santa does not appear to be playing games.

Stay tuned for further updates on Christmas Bloody Christmas as they roll in.