All Your Moving Parts: Subverting the Male Gaze in Lucky McKee’s MAY

So many pretty parts... but what about the whole? 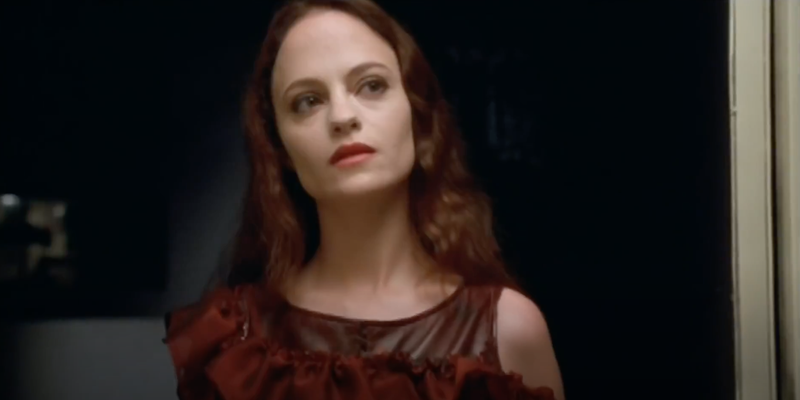 Horror films, particularly the slashers from the 1970s and 1980s, are often criticized for their use of the male gaze, or sexualization of the female body as an object of male desire. The term, as theorized by Laura Mulvey in her essay Visual Pleasure and Narrative Cinema, is a way to define the role of the woman on screen and how they are portrayed first and foremost as objects rather than people. Every move a woman makes on screen is in service of the heterosexual male viewer.

But in his 2002 film May, Lucky McKee plays with expectations of the male gaze and takes them to the extreme to subvert what audiences already know about how the female body is viewed in horror. McKee is a male director, so it’s nigh impossible for him to prevent the presence of the male gaze. So, instead of trying to fight it, he acknowledges his role as a man behind the camera and leans into it to create something new. He confronts that gaze head-on by channeling it through his female character to create a new type of gaze that moves from more than fantasy.

A crucial part of the male gaze, as defined by Mulvey, is how the female body is viewed as sexual parts instead of a whole. The camera will film close-ups of a woman’s chest, eyes, lips, even hands to make them objects of desire. Think of your favorite slasher. Then think of how its female characters are introduced through close-ups of their tight shirts clinging to their breasts, or the camera’s focus on the Final Girl’s butt as she runs away from the killer. No matter the situation, that gaze is prevalent in delivering what straight, cisgender male audiences want: attractive women. McKee takes this specific aspect of the male gaze and applies it to his character of May herself. Instead of the camera subconsciously filming women in such a way, May is purposefully shown examining the human —regardless of gender— as not just sexual parts, but as objects of beauty and utility.

May (Angela Bettis) is a loner who’s obsessed with dolls and has an unnerving love of surgical procedures, which she practices on the animals at the vet’s office where she works. In her profession she gets to examine, touch, and manipulate the individual pieces of a living being, looking inside of them to see what makes them tick. Her fascination with bodies starts here as she removes dog legs to discover the perfect way to sever muscle and bone. Removing animal legs and eventually human legs showcases how May doesn’t see people as people, but as pieces of a perverse puzzle that she’s determined to finish.

May also views herself as an assortment of parts due to her lazy eye, a characteristic fixated upon by her mother that defines how May feels about her own body. That eye is an obsession, something May is always thinking about and trying to fix. When looking in the mirror, May gazes at herself as an amalgamation of defective parts that establish her own self-worth. She is extremely self-critical and that perspective translates to other people; how do they measure up and exceed her expectations of the human body. Therefore May becomes obsessed with the beautiful parts of others, as well as their perceived “defects” and imperfections, as she envisions her own perfect being.

Her strange gaze begins to more obviously manifest when she meets her love interest Adam (Jeremy Sisto), fixating on his hands as he works on a car. Having a woman view a man’s hands as an object of sexual beauty to an uncomfortable extent — she does grab his hands while he falls asleep at a cafe — illustrates the ridiculous nature of the male gaze. It takes a female character and her own insecurities to make the harm of the male gaze more evident to the viewer. And this is not meant to villainize May; rather, it’s how McKee wants to confront the viewer with how they themselves are conditioned to look at the cinematic body.

May’s most egregious moment of her penetrating gaze is when she meets her coworker and ex-lover Polly’s (Anna Faris) new girlfriend, Ambrosia (Nichole Hiltz). Ambrosia is not introduced as a person, but rather a pair of legs peeking around the corner. As May looks inside Polly’s apartment, the camera follows her gaze to those two legs, dehumanizing Ambrosia through both the camera and through the eyes of May. She is the one gazing at her legs and fixating on them as a work of art. The long, tanned legs of Polly’s lover dangle around a corner, enticing her to come back to bed, flaunting that asset. May’s adoration of Ambrosia’s legs doesn’t stop there; she later compliments them, cementing her own gaze as a body-obsessed individual.

May’s analytical and careful gaze culminates not in desire, but in horrific action. She decides that these characters don’t deserve their gorgeous legs and beautiful hands, so she should take them to create her own perfect being. That male gaze, all about ogling the body, is taken to the extreme as May takes the coveted body parts for her own. This flesh doll, made of Adam’s hands, Ambrosia’s legs, and even May’s cat’s fur, is McKee’s violent confrontation of what the segmented body looks like when no longer sexualized. But when those parts are brought together, they create something terrifying and reveal that the way humans think about beauty is ultimately something to fear.

May is eventually forced to confront her own gaze as she stares at herself in the mirror and violently removes her lazy eye with a pair of scissors. The eye is meant for her doll, but it is also May trying to alter her own perception of the world and herself. If she can project that gaze onto her perfect object, and even share that gaze, then she has accomplished her ultimate goal. But that goal comes with a price and an acknowledgment of what comes with such a perspective on the human body.

Humans are nothing but an assembly of parts that have their own specific functions; at least that’s how May sees them. Romance comes second to her ability to caress a pair of beautiful hands and the thrill of examining someone’s skin. Arousal comes from that experience, which mirrors the male reaction to seeing a woman on screen. May is already a revolutionary film that addresses all the weirdos out there through a horrific yet oddly sympathetic lens, while also layering in themes of queer identity. But McKee’s own acknowledgment of the camera’s gaze through May makes the film all the more unique and groundbreaking. An immobile sack of flesh made up of all of May’s favorite people — read, parts — embodies the horrors of how the male gaze functions not only in genre film, but across cinema more broadly. A film about a weird girl with a love of dolls may not seem to be the film to start a discussion about the male gaze, but why shouldn’t it be?