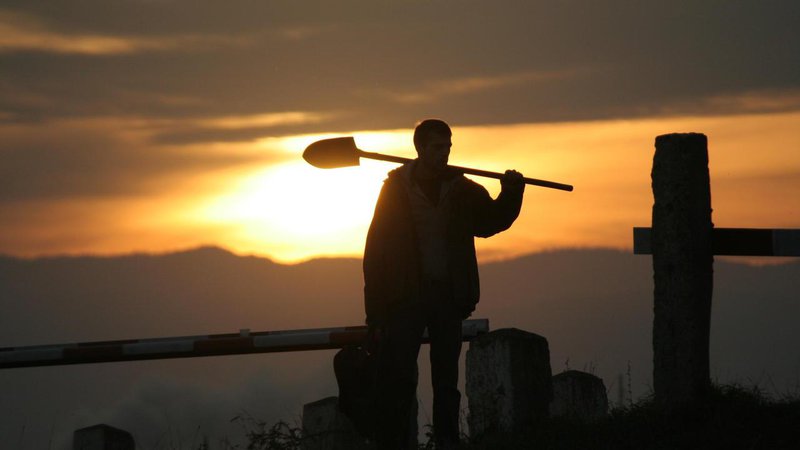 I suspect that if you have an interest in women-directed horror film, you’re already pretty solidly on board with low-budget indie filmmaking as a broader aesthetic for the simple reason women often – too often – struggle to get the same funding as their male counterparts. Faye Jackson’s 2009 horror-comedy film Strigoi to me is almost a masterclass of doing a lot with a little; it somehow never tries to disguise the lo-fi nature of its production, and yet never feels cheap. This is a really tight film that uses every single element of its production to its greatest advantage in producing a really funny and unapologetically political horror-comedy movie.

Set and filmed in Romania, Jackson employs the folkloric figure of the strigoi - a kind of regionally specific vampire figure - to get her teeth into that country’s history of oppression and corruption in a way that is consistently engaging, really dark and often just straight up hilarious. The film follows a young man called Vlad, played by Catalin Paraschiv who returns from Italy to his little Romanian village, his dreams of becoming a chef abroad collapsing after gruelling work in a chicken shop shattered his ambitions and sent him on his way back home, tail between his legs. Having dropped out of medical school to follow his dreams and failing big time, he quickly becomes the source of mockery for the small community for even bothering to have hopes and dreams in the first place. But the villagers and newly arrived Vlad frankly have much bigger problems to contend with as his homecoming occurs just after a series of strange deaths have taken place. Investigating both the weird killings and the undeniably peculiar behaviour of his neighbours, Vlad is forced to face the in-built corruption that lies at the heart of both pre- and post-Communist Romania in a way that is wholly original and thoroughly engaging.

There’s a whole history here that goes right back to the Nazis and their relationship to Romania, and while Jackson at some points only implies the hypocrisy of post-Communist powers in the country, in other key moments she makes it very explicit. In this film, the villains are those who hold powers; not just politicians, but land-owners whose legacy of stealing the homes and livelihoods of their neighbours impacts the present day in very real ways – economic bloodsuckers. The real-life execution of Romanian dictator Nicolae Ceaușescu and his wife that was broadcast live on TV looms pretty large here, so it’s good to go in with a basic knowledge of that event if you’re not up exactly on your Romanian history otherwise, but even if you’ve never heard of this stuff, the film still works, and works very well - it’s hard to miss its political punch, just as it’s hard to miss its deep, pitch black humor.

This political edge, even if you don’t know the real-world background details of what happened in Romania in the 20th century, is where Strigoi really gains its power, both in terms of how Jackson utilises it in terms of this regional variation of vampire mythology itself, but also the more universal human tendency towards name-calling and demonizing anyone you don’t like as a political monster. This is what makes this more than a local history allegory; Strigoi has a lot to say about people, and what we’re capable of in our darkest, most desperate of times.

But let’s face it: politics aside, we’re here for the vampires. I love how this film employs strigoi mythology, almost reclaiming the regional specificity of this figure back from the far too often milquetoast contemporary version that has washed all the original cultural odour out of the figure beyond what might be the odd cartoonish Eastern European accent. Strigoi are really interesting and worth looking into if this is something that is up your alley; while they most immediately adhere to what we understand as vampires, they also have elements that we would perhaps more traditionally link to the witch figure. Jackson takes this very rich, unique history and weaves it together with issues more relevant to contemporary Romania in a really engaging, really thoughtful and really funny way. This is a genuinely great film, and well worth your taking the effort to track down.