SOMETHING WICKED THIS WAY COMES: A Dark Dive Into The Bradbury Classic 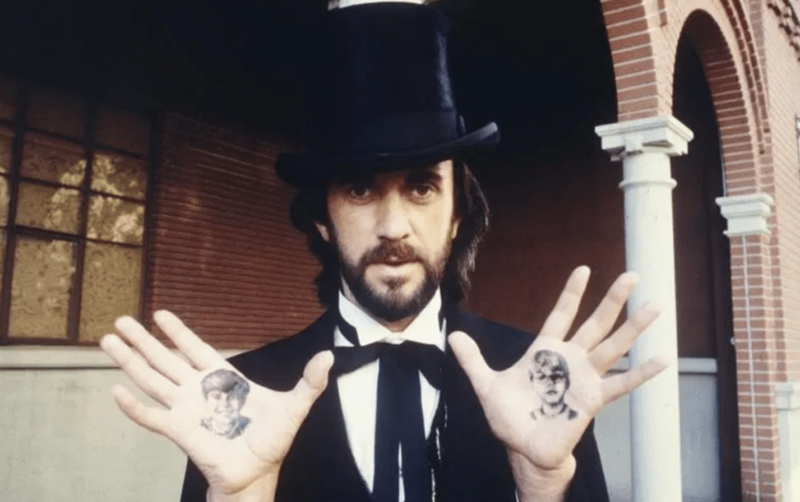 SOMETHING WICKED THIS WAY COMES (1983)

We don't scare children enough these days! For some odd reason, modern storytellers seem to be under the impression that kids either can't handle the macabre or have no interest in fear. As someone who used to be a kid, I can safely state that both assertions are false. My fondest childhood memories were of being frightened silly by the old Disney villains like the witchy Maleficent from Sleeping Beauty and the demonic Chernabog from Fantasia. 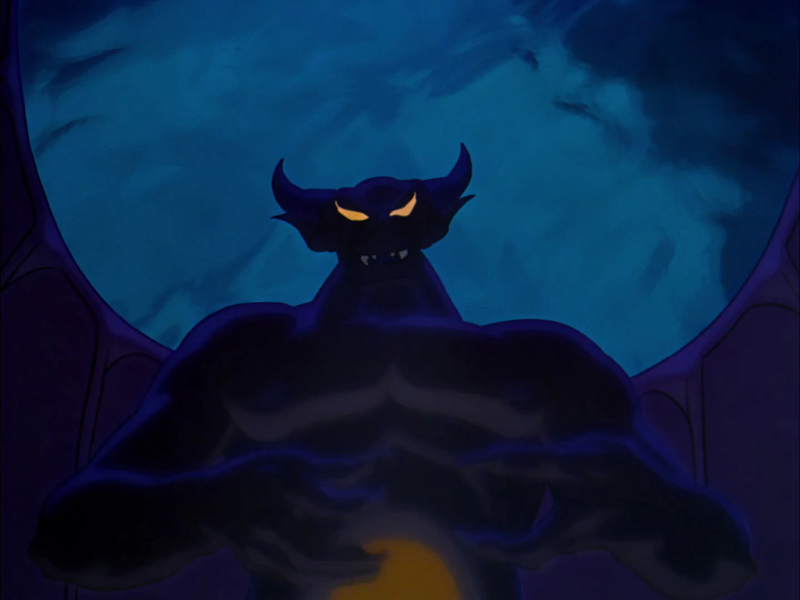 Both creations reveled in evil and commanded the forces of darkness. Were they scary to a youngster? Absolutely! Were they more compelling than any of the sickly sweet heroes around them? You bet! "Family friendly" stories almost always had that element of morbidity. From Pinocchio smashing the Cricket in his original novel to the stygian boat ride in Willy Wonka and the Chocolate Factory, it seemed that our fantasies used to nurture a child's love for the gruesome. 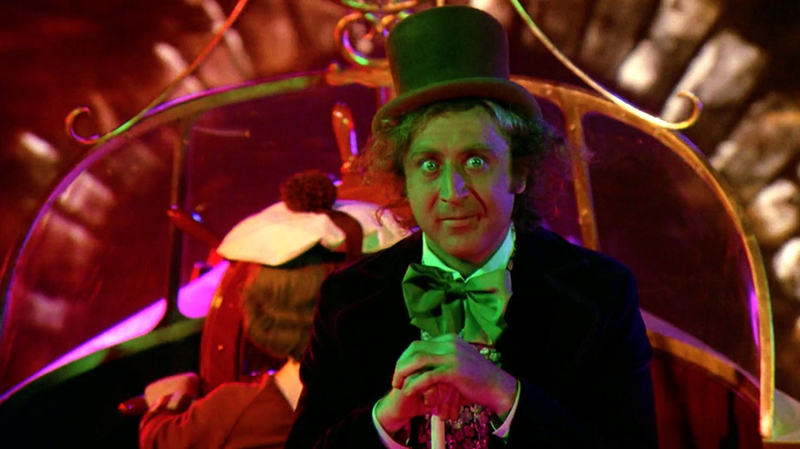 Unfortunately, the touch of terror customary in fairy tales has fallen out of fashion. Modern Disney villains are either misunderstood or bureaucratic types who lack the theatrical menace of their forbearers. PG horror like The Watcher In The Woods and Gremlins are almost non-existent, and blockbuster adventure films these days never feature anything as hideous as the melting faces in Raiders of the Lost Ark (though Doctor Strange in the Multiverse of Madness certainly tried to live up to that standard). We may have abandoned our wicked ways, but the children's horror of the past still remains available today. If you are young or young at heart, there is no greater masterpiece of children's horror than Ray Bradbury's 1962 novel, Something Wicked This Way Comes. 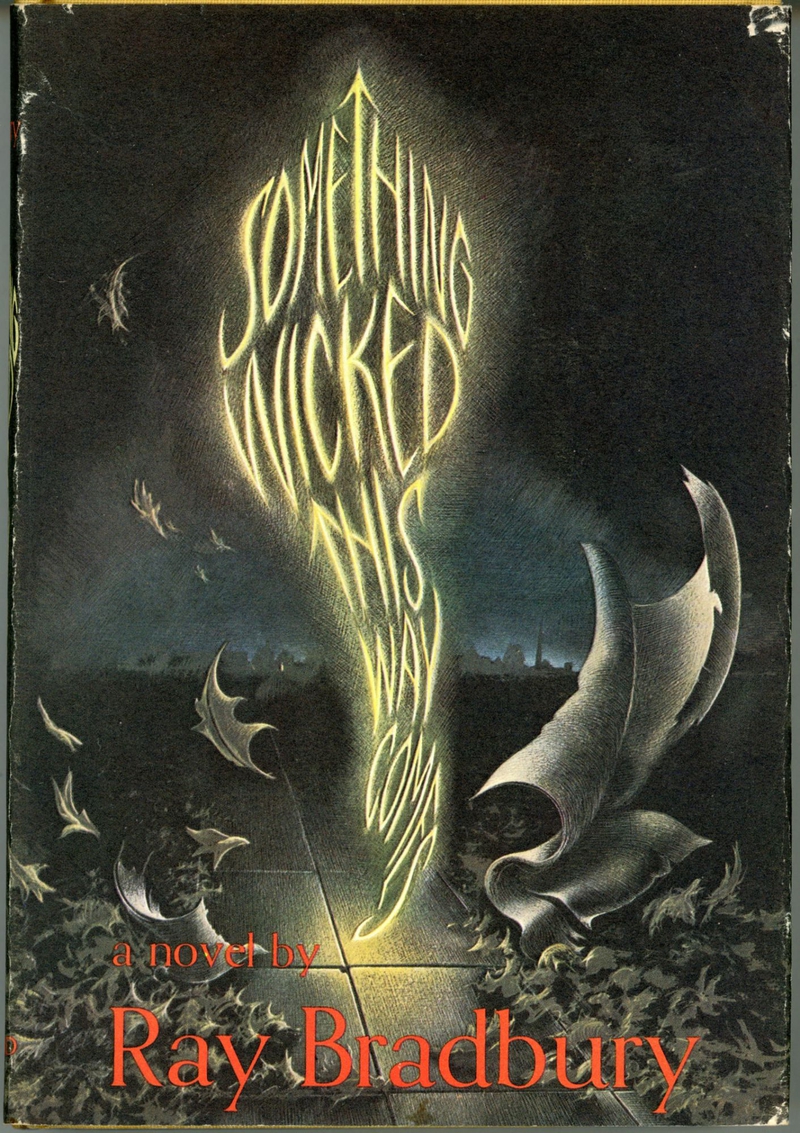 Something Wicked This Way Comes is a horror story by a man who remembers his boyhood fascination with fright. A Monster Kid before Monster Kid culture was a thing, Bradbury spent his early years idolizing Lon Chaney and visiting the sideshows. At the age of twelve, the future author encountered an enigmatic figure named Mr. Electrico. As the name would suggest, Mr. Electrico was the amazing electrified man: a carnival magician who sat on a hot electric chair and lived. With electricity coursing through his body, the shocking performer raised a sword and knighted the young Mr. Bradbury, commanding the child to "Live forever!"

The next day, after attending an uncle's funeral, the boy ran straight to the carnival to see Mr. Electrico once more. As Bradbury himself put it, he "had to run away from death and run toward life." Young Ray asked the magician for advice on a trick, which seemed to delight the great Electrico. He introduced Bradbury to the other performers, including the Illustrated Man. At the end of this meeting, Electrico declared that Ray was the reincarnation of a friend who had died in WWI. This odd series of events had a profound impact on the young boy. Bradbury later wrote, "a few days later I began to write, full-time. I have written every single day of my life since that day." 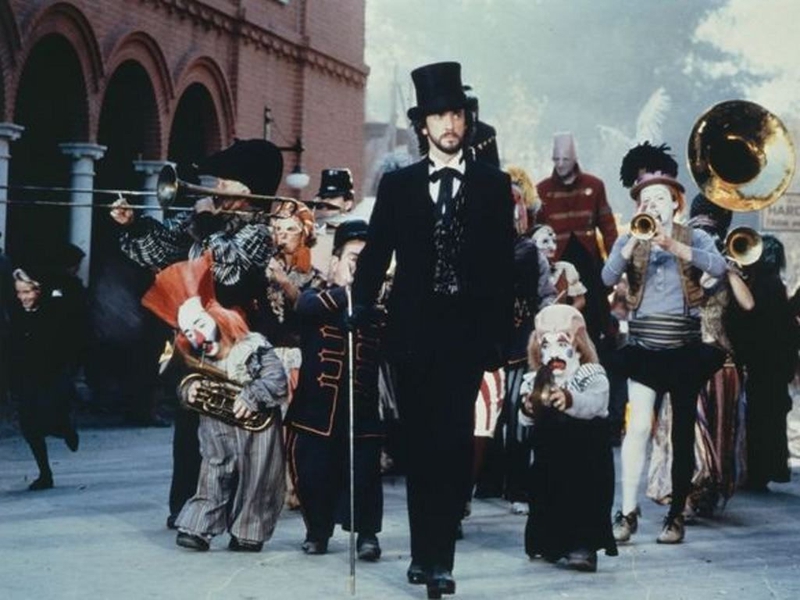 Elements of Something Wicked... can be found in much of Bradbury's early work, most notably "The Black Ferris," a short story published in 1948. Like Something Wicked, "The Black Ferris" concerns two boys, sinister carnies, and a time-reversing carnival ride. In 1955, Bradbury suggested to Gene Kelly (yes, THAT Gene Kelly) that they collaborate on a film. Kelly liked the idea, so Bradbury adapted "The Black Ferris" into an 80-page treatment. Kelly shopped the script around to various studios, but no one was interested. When nothing came of it, Bradbury expanded the treatment into Something Wicked This Way Comes over a five-year period. The Illustrated Man, Skeleton Man, and benevolent Mr. Electrico were all twisted into ghastly figures. To run toward this carnival is to run toward death. 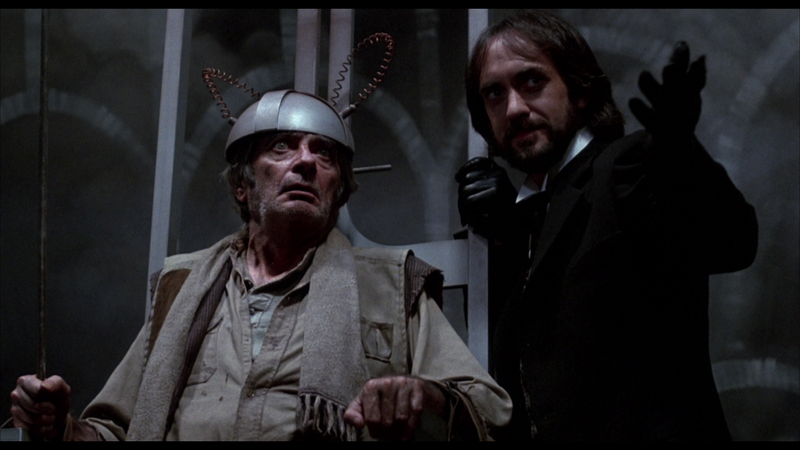 Bradbury's story concerns the arrival of an alluring evil in a small town: Cooger & Dark's Pandemonium Shadow Show. Before the amusement show even sets up camp, Bradbury conveys to us its ominous nature through eerie, sorrowful imagery. The carnival train is a "funeral train" with "all black plumed cars . . . and licorice-colored cages." Its whistle is "a thousand fire sirens weeping . . . protests of a billion people dead or dying, not wanting to be dead, their groans, their sighs, burst over the earth!" The tent has "skeleton" poles waiting for its canvas "skin." In short, this is not the sort of carnival where you'd go to play Roll-a-Ball. Every wonder, every thrill is a Venus fly trap waiting to ensnare its prey.

The proprietor is the aptly-named Mr. Dark, a malefic figure who feeds on pain. Dark is the Illustrated Man, a tattooed demon who gains new ink for every soul he tempts into joining his carnival. His use of circus delights to lure folks to oblivion may remind modern readers of Pennywise the Dancing Clown from Stephen King's IT. The fact that his primary enemies are children makes the comparison complete.

Speaking of which, the aforementioned children are Will Halloway and Jim Nightshade, two boys on the verge of their 13th birthdays. (Will was born one minute before midnight on October 30, Jim was born one minute after midnight on October 31.) Will is cautious and practical, while Jim is brash and foolhardy. While both are intrigued by the carnival, the darker (but ultimately good) Jim is more susceptible to the carnival's temptations, especially the promise of becoming older.

Will, on the other hand, is in no rush to grow up. The other major player is Charles Halloway, Will's fifty-four-year-old father. Charles believes himself to be old, therefore he is. Mr. Halloway longs for youth the way Jim longs for adulthood. And at Cooger & Dark's Pandemonium Shadow Show, such longings can be satisfied. After all, altering ages is easy when you have a merry-go-round that can turn back time or move it forward. Mr. Dark will gladly grant anyone the age they desire... for a price, that is. 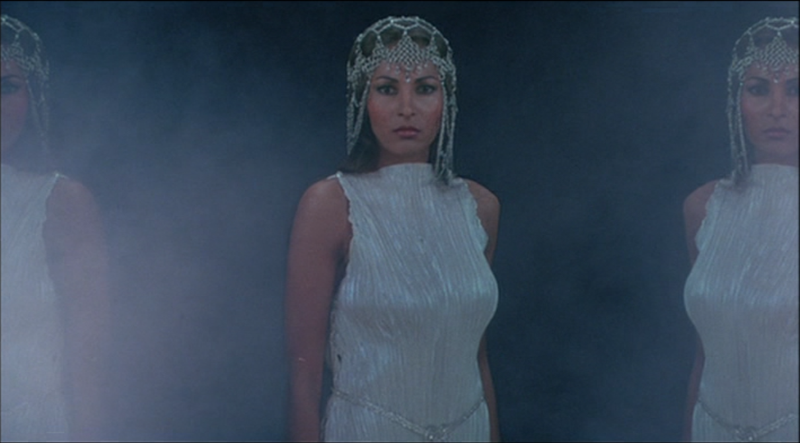 While Something Wicked This Way Comes can be read at any point during the year, it is most definitely a Halloween story. The prologue describes the season with the usual Bradbury elegance:

"First of all, it was October, a rare month for boys. Not that all months aren't rare. But there be bad and good, as the pirates say. Take September, a bad month: school begins. Consider August, a good month: school hasn't begun yet. July, well, July's really fine: there's no chance in the world for school. June, no doubting it, June's best of all, for the school doors spring wide and September's a billion years away.

But you take October, now. School's been on a month and you're riding easier in the reins, jogging along. You got time to think of the garbage you'll dump on old man Prickett's porch, or the hairy-ape costume you'll wear to the YMCA the last night of the month. And if it's around October twentieth and everything smoky-smelling and the sky orange and ash gray at twilight, it seems Halloween will never come in a fall of broomsticks and a soft flap of bedsheets around corners." 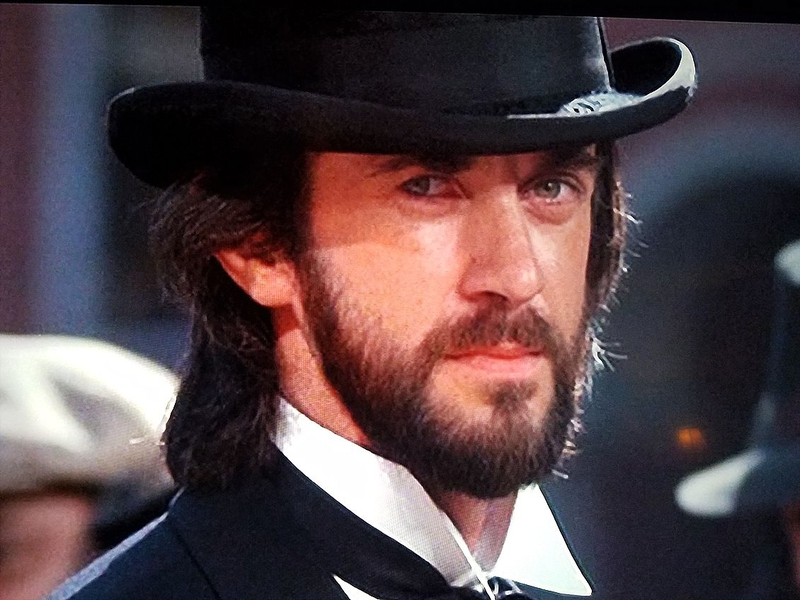 It's a Faustian fable for those who can't get enough of Halloween. The villains in this story are alluring to Jim (and us) because they are eerie; they entice with the allure of horror. In their sinister way, the freaks of the Cooger & Dark's Pandemonium Shadow Show represent Halloween. They are even referred to as "autumn people." This is how Bradbury described them:

"For these beings, fall is ever the normal season, the only weather, there be no choice beyond. Where do they come from? The dust. Where do they go? The grave. Does blood stir their veins? No: the night wind. What ticks in their head? The worm. What speaks from their mouth? The toad. What sees from their eye? The snake. What hears with their ear? The abyss between the stars. They sift the human storm for souls, eat flesh of reason, fill tombs with sinners. They frenzy forth....Such are the autumn people." 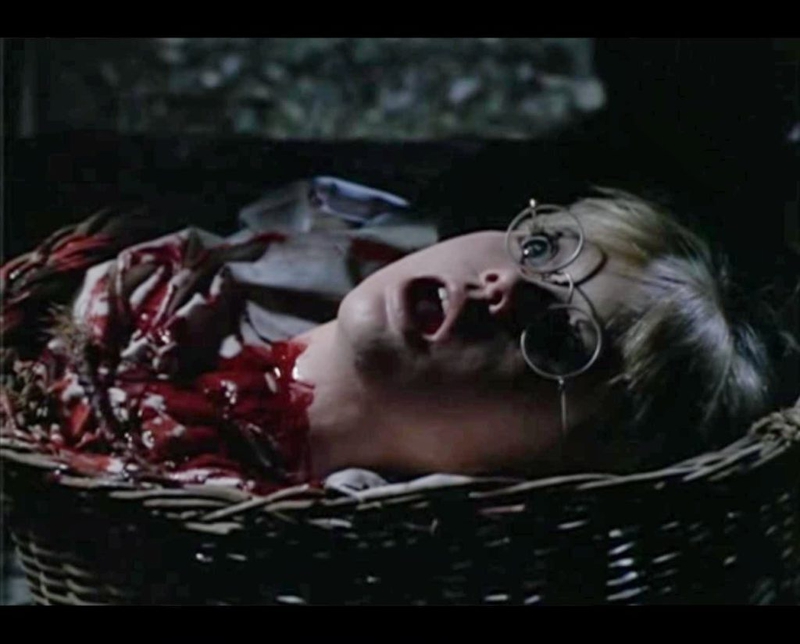 Something Wicked This Way Comes is not only a masterpiece of children's horror but one of the all-time great novels of the genre. While the 1983 film adaptation is a pretty good take on the material, it lacks that essential element that makes the novel so brilliant: Bradbury's descriptions. Every metaphor and every sentence is pure poetry. His style almost approaches surrealism with his lyrical language. The scary stuff is made scarier with graveyard imagery and florid descriptions of evil. I've provided examples of his exceptional writing, but the only way to get the full experience is to read the book. And it's even better if read with a flashlight under the covers, late at night. That's the way Ray would've wanted it.