Slice And Dice In MIXTAPE MASSACRE

In the MIXTAPE MASSACRE board game, it’s all about the body count. 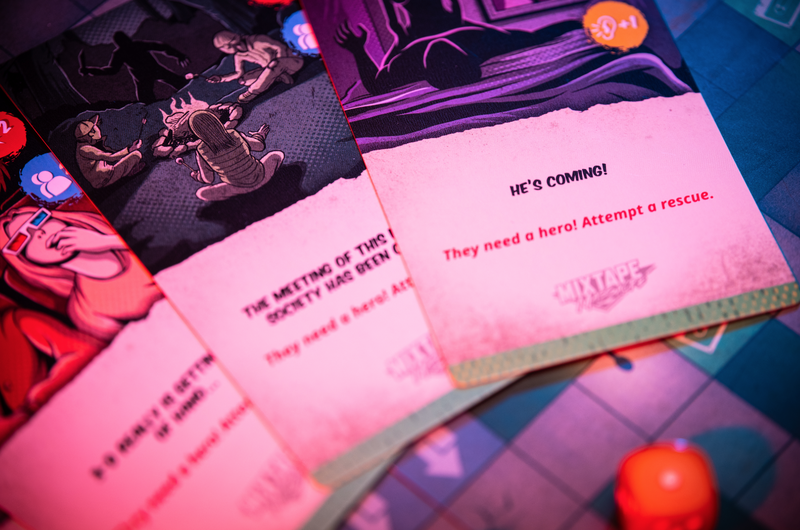 They say if you do what you love, you’ll never work a day in your life. But what if you’re an axe-wielding, homicidal maniac? Following your bliss could get a little hairy, especially with do-gooding “heroes” barging in and ruining all your fun!

Mixtape Massacre from Bright Light Media gives 2 to 6 players the opportunity to take on the role of one of the aforementioned maniacs (axe-wielding or otherwise) and see just who can rack up the most kills in the seemingly wholesome (but, let’s face it, damned unlucky) town of Tall Oaks. Players visit locations around town and go in for the kill when they happen upon some poor unfortunate. The “Killer Scenes, Dude” cards describe the number of knives to roll on the attack dice to dispatch your victim and the number of trophies (grisly ones!) to take. If you’re successful, the spree continues. Victims are like potato chips to homicidal maniacs… one is never enough! Roll the dice to follow the scent and continue your reaping with ardor. 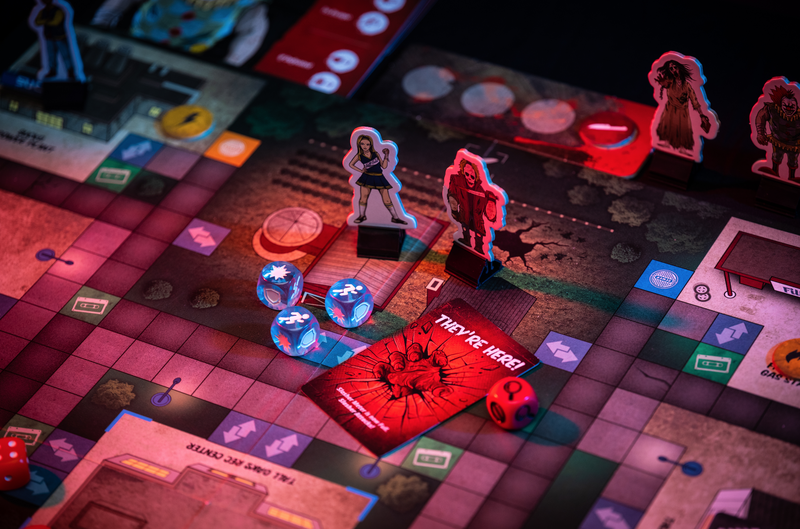 Easy pickin’s, right? Well, to a point. All that slashing, chopping, bashing, and chainsawing can be noisy. Make too much of a ruckus, and the Hero shows up, fresh from Central Casting and ready to ruin your fun. The base game comes with two goodnicks for players to face: there’s “Linda,” who resembles a familiar sentient machine-fighting badass, and “Kirk,” a gritty, eye-patched loaner from a dystopian future who you’ll think was either “dead” or “taller,” depending on which coast you prefer your city-wide prisons.

Mixtape Massacre started as the brainstorm of Freddie Carlini, one of three partners, along with Matt Corrado and Merrijoy Vicente, at Bright Light Media, a client-focused art and design studio in Kensington, Maryland. The idea came to him after attending a board game night at a friend’s house. 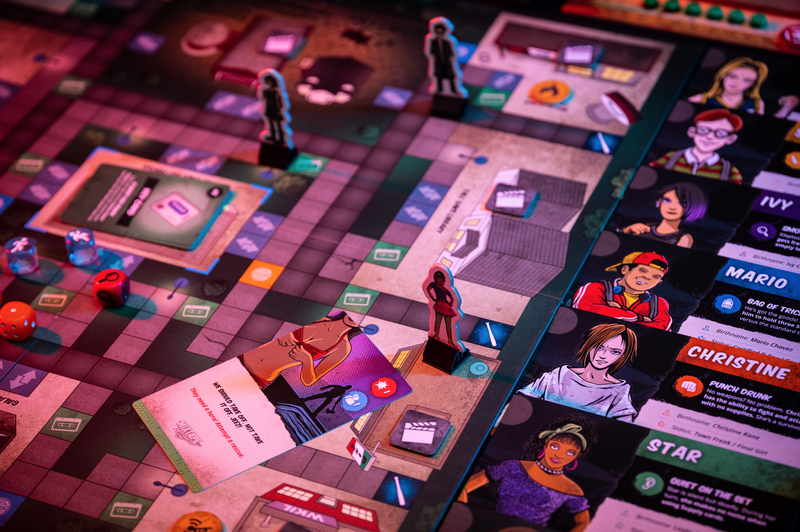 “There was one night in 2014 I guess it was,” says Carlini, “I was at a game night. Everyone brought tons of games and no one could decide on one. A lot of people were mentioning that it takes three hours to learn how to play this, blah, blah, blah… and I get that there’s an entry-level to it… so that’s what led me to start to think about: is there a little, fun game we could make, and there’s no games for slashers and things like that, it would be really cool to make something geared toward that.”

Carlini let the idea gestate for two or three months, then he brought the idea to his partners at Bright Light Media. He remembers Corrado’s reaction: “At first, he thought I was a little crazy, like, ‘Why are we talking about board games right now?’ and then he did some research on his own and was like, ‘Actually, this could be pretty cool.’” 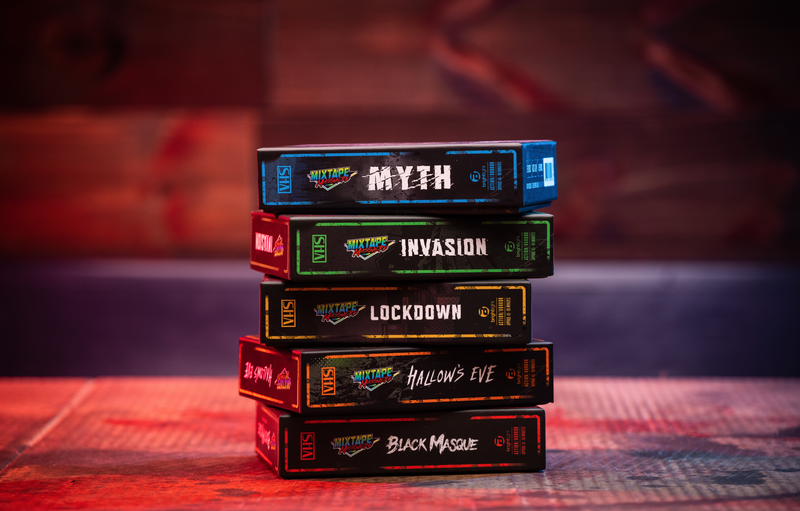 Corrado adds, “I wouldn’t say I’m as much of a gamer. I’ve played games casually, I guess, but no more so than probably the average person, so, for me, I was obviously driven more by the art and design components of it.”

Unsure at first but attracted to the elements that drew on his artistic background, Corrado began to see the potential in the project based on common interests with Carlini, with whom he’s been friends since they were 14. “We were both into a lot of comic books and we talked about different projects and movies and stuff… we kind of checked out the market, and there were a bunch of zombie games, like Zombicide was around then. Actually, there were a lot of zombie-inspired games. Walking Dead was popular, so that makes sense, but there wasn’t anything that was more slasher-driven and more ‘80s, golden-era horror stuff, you know, the classic characters we grew up on.” 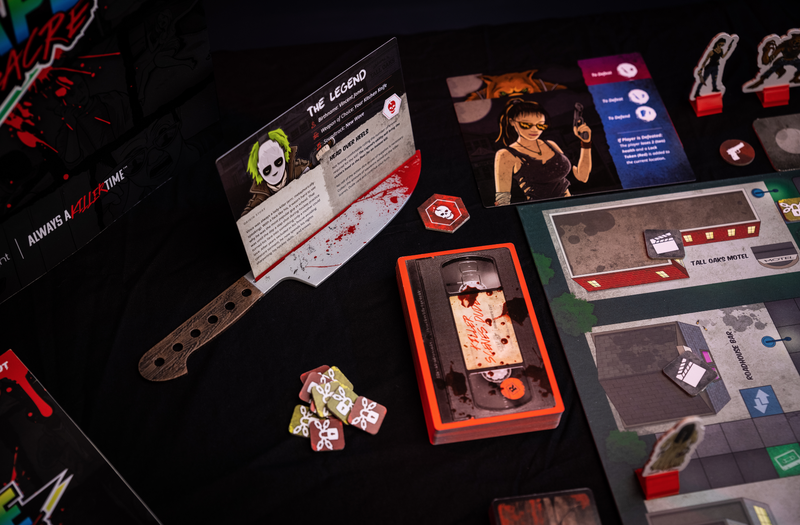 Mixtape Massacre is without a doubt a love letter to, not just slasher films, but ‘80s genre cinema, music, and pop culture in general. The whole production is shot through with nostalgia. It’s in the theme, the artwork, and the humor. As mentioned earlier, the victim deck, called “Killer Scenes, Dude” cards feature a VHS tape on the back, sure to melt the heart of any horror fan of a certain age. Another deck of cards, aptly called “Bonus Tracks”, that players can gain around Tall Oaks which grant (mostly) special boons through temporary healing, movement bonuses, fending off that tenacious Hero, and other things feature an old-school audio cassette on the back (pencil not included). A quick dig through the “Supplies” deck will turn up loads of familiar weapons like a power drill, meat hook, rusty knife, bear trap, chainsaw, and other tools of your gruesome trade. 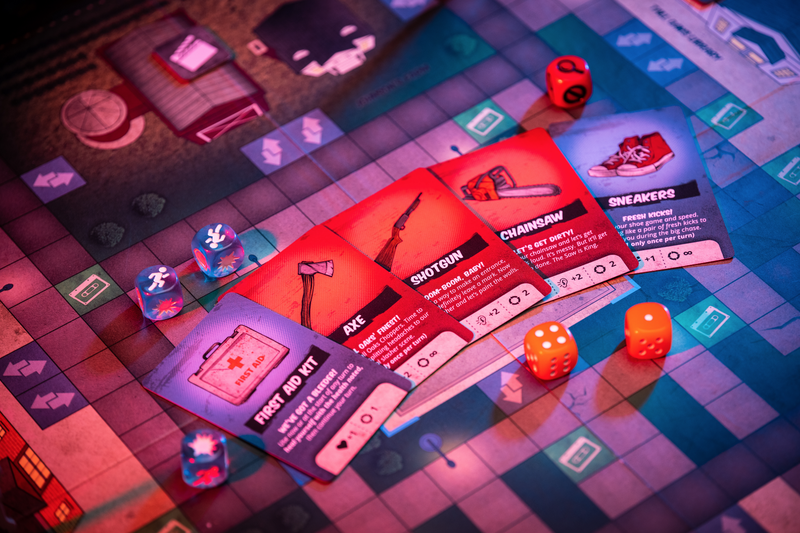 The gang at Bright Light was keenly aware of their audience. The theme, artistic choices, and design all lean heavily into nostalgia. Some of the game’s mechanisms, like roll-and-move, are decidedly “old-school” and that’s on purpose. Carlini notes that they were “trying to make something that wasn’t too extreme… it’s more of a casual game than a six-hour campaign, Dungeons & Dragons type of game. We wanted to make something that, if you looked at the board, you had a sense of how it works and, if you ever played an old Milton Bradley game, you would get some of the concepts, and then we gear you into some of the more modern mechanics.” 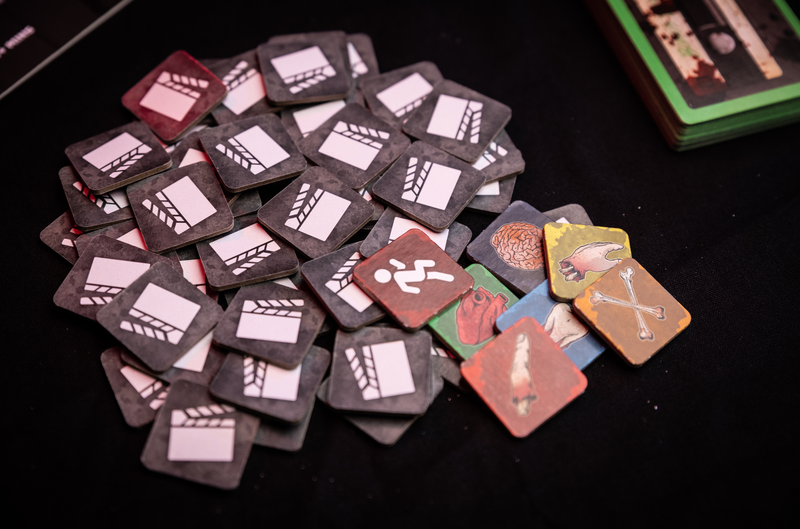 Removing barriers to entry is smart, especially when trying to appeal to people who aren’t necessarily hardcore gamers (maybe not yet and maybe not ever, and both of those are ok). After all, the indecision of a game night with 35-page rulebooks and 45-minute rules explanations lit this fire in the first place.

“What I liked about our approach,” Carlini says, “is that… we get a lot of compliments when we go to cons and stuff, some from hardcore gamers who love, like, ‘Yeah, I can sit down with friends who never play board games and they’ll play this game immediately. They love the theme, they love that it’s really easy to get into and then, as I add expansions and stuff, it gets harder, and they start to learn some of those more modern mechanics.’ I feel like a lot of the people we brought in, who wouldn’t normally play games, have also grown as gamers and are starting to reach out to other games, which is exactly what we wanted.” 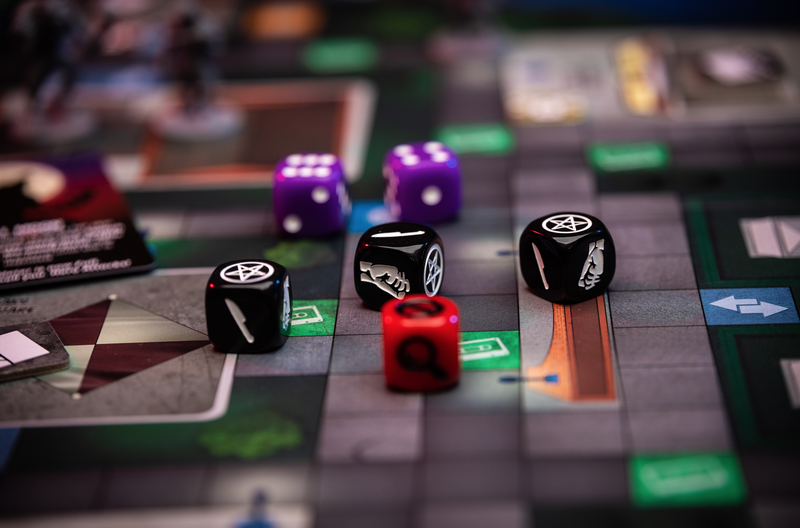 The gaming tent is big enough for everyone, in this writer’s opinion and, while I might enjoy a dry-as-bone economic “cube pusher”, I’m certainly not averse to chucking some dice and sending my friends cursing into oblivion.

Did I mention you get to murder your friends, too? Oh, yes! You’re not just a maniac by vocation, it’s who you are! You’re not the only lunatic in Tall Oaks, and there just aren’t enough hapless teens to go around. You will eventually bump into one of your fellow boogeymen, and, just as when Freddy met Jason, the sparks will fly. 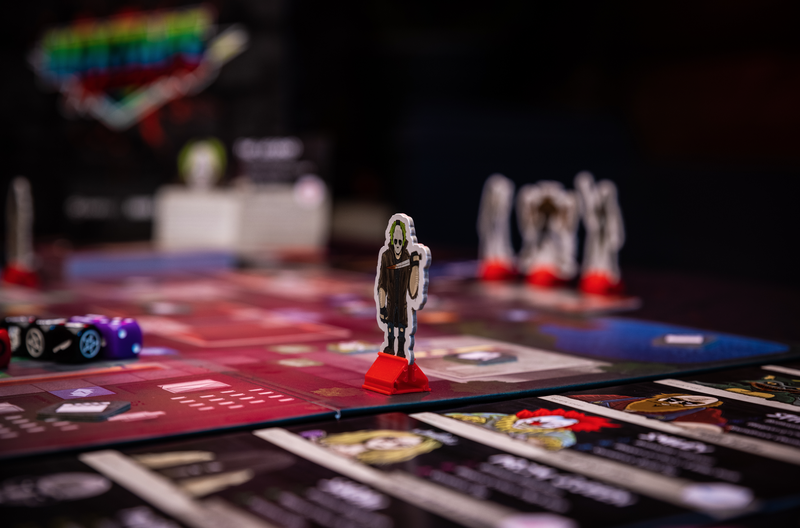 Since they are primarily a client-based services design studio, the gang decided to go the Kickstarter route to fund the endeavor. The popular crowdfunding platform was picking up steam for board games around that time.

“We knew marketing, we knew design, we knew we could put it together, so it was more about figuring out how to make something that’s going to be fun for people to play,” says Cotrrado. “From a design perspective, we knew that we could definitely compete with some of the projects [on Kickstarter] in terms of the quality of the artwork, of the look and the feel of the whole product.” 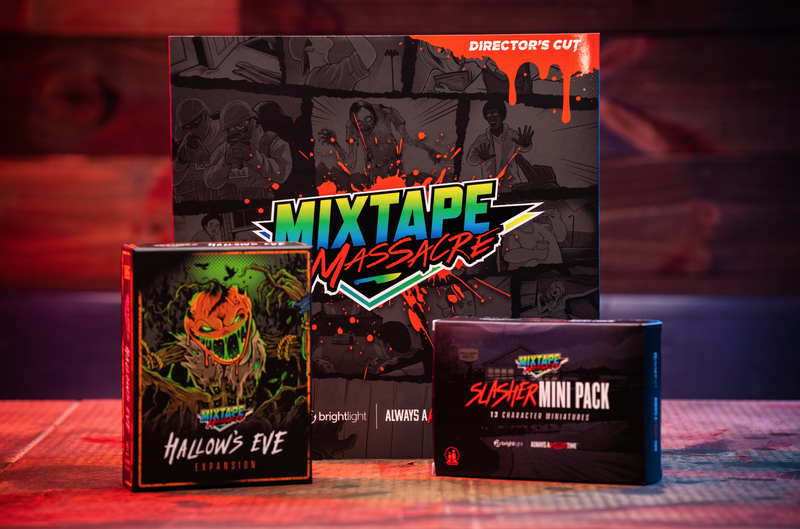 The first campaign was a success, and in 2016, the first edition of Mixtape Massacre was delivered to backers. As word of mouth spread, Bright Light went through four or five printings of the game and, just recently, they Kickstarted a revised “Director’s Cut” edition of the game, refining mechanisms and streamlining gameplay even more.

“Basically, everything was touched during the process,” says Carlini of the revamp. “A lot of the art stayed the same. Some characters were updated, some cards were changed, and things like that, but our big thing was because we were adding weapons and certain mechanics, we wanted to make sure that we updated the stats and balanced things out. We made sure everything that we wanted to kind of finesse was getting that touch. So I think by the end it was close to seventy percent of the content was changed.” 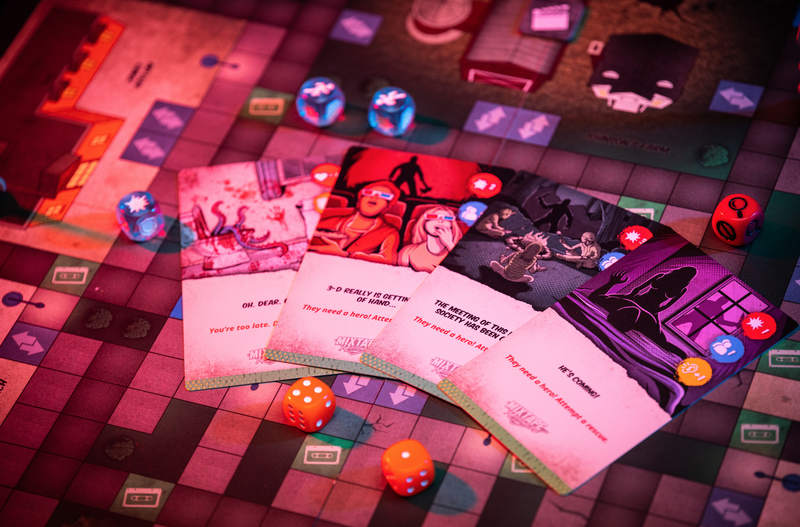 The enthusiasm of the Mixtape Massacre fan community is obvious. The Kickstarter campaign for the Director’s Cut attracted more than three times as many backers, and it comes just two years after the successful release of a separate “standalone expansion” game called Mixtape Massacre: Escape From Tall Oaks. 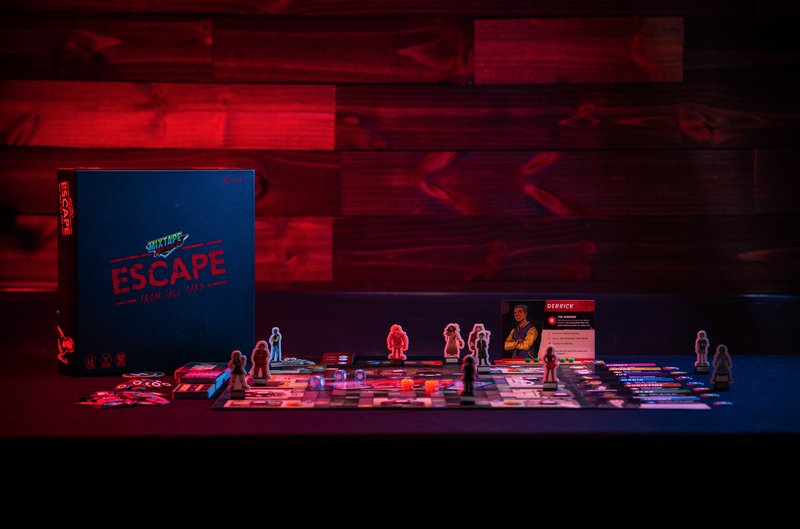 In Escape From Tall Oaks, the script is flipped. Players are Heroes this time, trying to perform rescues and complete tasks that will allow them to “Get to the Chopper!” and leave this killer-infested town behind. Of course, the maniacs aren’t going to make that easy, and once the chopper is ready, you’ll find even your fellow “Heroes” are ready to climb over your body, warm or otherwise, to get to safety.

There is content in both base games that can be swapped back-and-forth along with a handful of thematic, game-changing expansion packs, such as the cryptid-oriented Myth, extraterrestrial terrors in Invasion, and a pumpkin-pated folk horror in Hallow’s Eve, adding a variety of challenges. 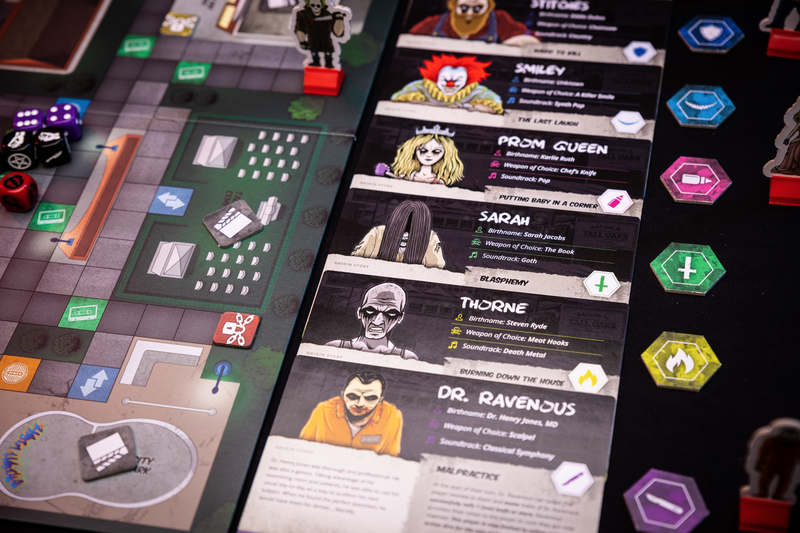 “We’ve been trying to grow this thing organically over the last five years and just keep pushing it along to see how big we can get it, little by little,” Corrado says. “Now we have five expansions and two base games and all these booster packs and we’ve created all these characters and created a whole Mixtape Universe, which has been really fun for us. That’s the fun part, coming up with all the creative stuff and telling the stories and piggybacking off all the tropes and all these classic stories in movies and films and horror stuff that we loved growing up.

Carlini and Corrado assure me the story isn’t over for Tall Oaks. Running around in a blood frenzy must be exhausting, so everyone will take a breather, sharpen their blades, claws, and meat hooks, and they’ll be back for more. After all, we know that after the final chapter, there’s always a new beginning.

Check out everything in the Mixtape Massacre universe at www.mixtapemassacre.com