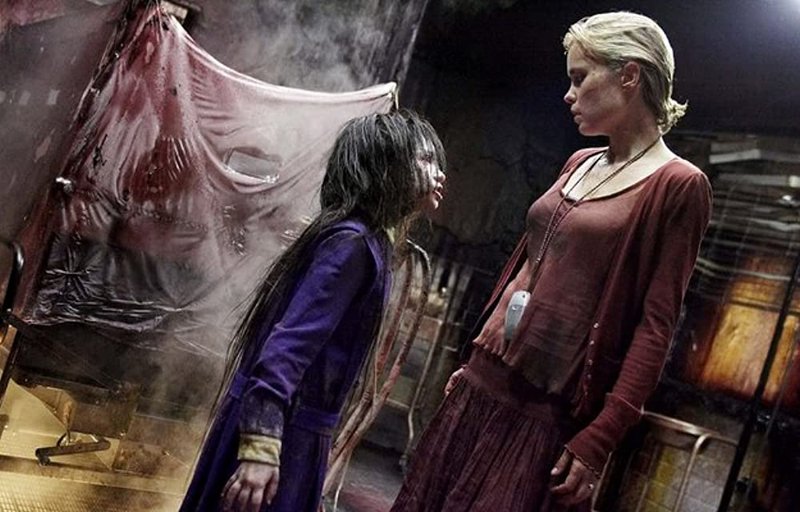 Adoption is an easily sentimentalized subject matter for film, flattened like pressed flowers in someone’s journal. The child is adopted, the parents are good, the child grows up with the desire to make contact with their birth parents, the child looks for them to find the “missing piece” in their identity, the child finds them (or not), and then the child remembers that it’s not just the birth parents that made them who they are, but also the parents who raised the child, and a celebration of nature and nurture is had, and a happy ending is reached. Hurrah! It’s in Three Identical Strangers, Annie, Philomena, even the first season of Bling Empire… We’re inundated with this maudlin narrative. There’s an ease to it all, and even the most difficult parts are slicked up in melodramatic oil to be all the more swallowable.

But Silent Hill, the 2006 psychological horror film directed by Christophe Gans and based on the acclaimed 1999 video game by Konami, is a piece of adoption cinema with a heart caked in rust, any trace of cliched sentimentality incinerated, its conception of love broiled beyond recognition. And it is a film about love; Rose Da Silva (Radha Mitchell) feels compelled to bring her adopted daughter, Sharon (Jodelle Ferland), to a bizarre coal mining town somewhere in West Virginia after noticing that her child calls out to this possible homeland in her sleep and in her drawings. When the two get into a car accident, Rose wakes up to find Sharon missing, and must journey into the fog to find her adopted daughter somewhere in the town. The town is desolate – claims that the coal fire that turned the town to kindling is still burning explain the ash that drifts down from the sky, blanketing the ground in apocalyptic snow.

The scream of the siren in Silent Hill announces the darkness, shrouding the whole place in black, while opening up a door into another terrifying realm where disfigured, monstrous Cronenbergian creatures come through to play. In phantasmagoric fashion, the creatures wisp away, the ashes falling in verse towards the sky, the factory-like netherworld gone with them. With a cop named Cybil (Laurie Holden), the two travel deeper into the annals of the town, and stumble upon a cult, led by Christabella (Alice Krige), whose ideology is built upon a great fear of the darkness and who professes to be able to assist in finding Rose’s daughter, despite warnings from an old woman with milky white eyes and stringy hair (Deborah Kara Unger).

Though praised for its visuals when it premiered, the film was dismissed as yet another example of the failure to adequately translate and adapt a video game, citing silly dialogue and a preposterousness in approach to plot. But the film, rather, creates a hybrid experience, creating a languid language of horror in its form while also giving the audience the illusory sense of exploring levels of a game, encountering cut scenes with idiosyncratic dialogue, and selectively doling out information in reward-like way. But Silent Hill’s brilliance lies in its ability to use that hybrid technique to design a topography of adoption trauma.

In Silent Hill, there are two worlds, two versions of Hell shared as one. Not just the “real world” that Rose’s husband (Sean Bean) walks around in as he searches for his wife and child, juxtaposed against the misty, deserted ghost town Rose wanders in that, when the siren whines, melts away into the fire and brimstone by way of steampunk dystopia. Rather, it’s that very flame-licked, charred world that’s two worlds in one, a dyad whose boundary disappears. Molded by the fires of subjectivity, trauma and attachment issues manifest as metaphysical, scorching the ground upon which adoptive mother and child of adoption walk. Inventively imagining those experiences as a horrific nightmare, Silent Hill challenges the way we frame adoption narratives in cinema.

Rose is quick to assert her role as mother of her adopted child Sharon, a child whose nights are spent sleepwalking through nightmares, calling out to her birth home. There is what would normally be considered an unusual lack of chemistry between Rose and Sharon, something off and devoid of cohesion. But a struggle to bond with an adopted child is one of the many difficulties parents experience, enough for parents to craft a narrative of emotional and psychological wrestling, as if to reaffirm their own goodness. (Ever seen Lion?) And that Rose seems so willing to bring Sharon to Silent Hill subverts and scalds the biologically essentialist trope of an adoptee in search of their birth family to solve a fundamental mystery about themselves. And while certain aspects of that mystery are intact, it's wrought with pain and cynicism, splattered in aesthetic reference points from Hellraiser to HR Giger.

Gans’ CGI worlds are ashen and molten, places of safety and early childhood development – a school, a church, etc. – smothered in smoke and flame, any care once there chased away from fiery furor, the camera unable to shy away from bubbling rawness. Gans and cinematographer Dan Laustsen push the camera through walls ablaze. It’s a pit that is as emblematic of a manifestation of adoption trauma (places of safety unrecognizable and not to be trusted) as it is of the personal narrative for adoptive parents to create. Rose is good because she is going to these lengths to find her adoptive daughter and reassert her daughter’s identity as intrinsic to her own. She mentions to Cybil, “Sharon's adopted, but I'm her mother. I knew that from the moment I first laid eyes on her.” Rose’s journey seems as predicated on maintaining her identity as a mother as it is on saving Sharon. And it might be this effortful struggle to maintain Rose’s identity as mother, to shoulder the burden onto the child in a way, that contributes to creating such a ruinous physical landscape.

As we learn that Sharon is the last bit of innocence in the child Alessa, who was burnt at the stake by the cult and believed to be a witch, a story of rage and rejection crystallizes: narrativizing the emotionally charged relationship between adoptive mother and adopted child as a “journey into the depths of Hell” is easy, but interrogating the purgatory of frustration, attachment challenges (like Reactive Attachment Disorder), self-loathing, negotiation of identity and selfhood, and feelings of rejection that a child of adoption might feel seems especially ambitious. Rendering it as a world that swings between the ashen depressive desolation of the abandoned town and the seared and blackened industrial abyss articulates a sense of interiority for adoptees and a perspective on adoption that is seldom examined.

Silent Hill cremates the conventional adoption narrative in cinema, drawing the nightmarescape of not only forming a bond with an adopted child, but sustaining it, and what that attempt to sustain it says about the adoptive parent. A whole world exists in the nuances of the relationship between the adoptive and the adoptee, hidden away in most films. But its sometimes ugly truth – boiling in the white heat of emotional frenzy and the complexity of care, love and trauma – is allowed to emerge from the fog in this film, that truth ready to raise its voice.

There’s a curious moment towards the end of the film that sticks out to me: as Alessa is unsheathing her wrath, that old woman who told Rose to run steps forward, closer and closer to the Alessa who is finally taking revenge on the cult who tortured her. But she remains untouched, her frail form and the secret in her heart reminiscent of the Beggar Woman in Stephen Sondheim’s Sweeney Todd. Huddled by the steps after the carnage, the old woman, who was Dahlia, Alessa’s mother tricked into sacrificing her daughter to the cult, asks Rose and the retrieved Sharon, “Why did she not take me with the others?” Torn by the chance to reunite with her daughter and to be punished for the guilt that has rested on her chest for all those years for the wrong she feels she has done to her, she’s left with a kind of emptiness. Rose answers in a voice barely above a whisper: “Because you’re her mother. Mother is God in the eyes of a child.” Recalling William Thackeray’s aphorism from his novel Vanity Fair, “Mother is the name for God in the lips and hearts of little children,” this revision is delivered like a false ending, unable to contain the relief and uncomplicated forgiveness that Dahlia, and in a way Rose, too, seeks. Mother may be God, but adoptees know religion is an opiate.