Shark Week All Year: The Popularity Of Horror's Toothiest Subgenre

We're gonna need a bigger boat as we sail through the chum-infested waters of the shark horror subgenre. 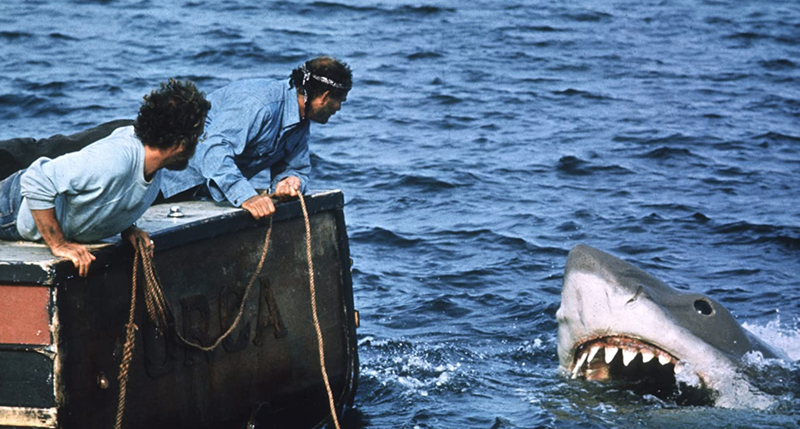 Shark Week is upon us, and with it comes the frenzy of all things related to our favorite predators of the deep. If there's anything the annual week-long celebration has taught us, it's that people have a love/fear relationship with sharks that is highly influenced by pop culture and dates back to the Granddaddy of them all, and the OG of keeping us out of the water since 1975: Jaws.

Steven Spielberg's masterpiece set a precedent for the psychology of people's fear of the water, and what lurked beneath. When it was first released, numbers of tourists and beachgoers dropped dramatically at popular seaside locations. This unintended effect played out much like the first half of the movie, with leaders of vacation destinations bemoaning the decline of much-needed dollars into their local economy. While subsequent summers did not suffer such dramatic boycotts as the one in '75 did, a new obsession was beginning, one that would mix equal parts fear and fascination.

Jaws is one of those films that presents the perfect formula of a well-written script, stellar acting and character development, and beautiful cinematography that still holds up today. And let's not forget that score. John Williams' haunting, two-note theme has forever solidified itself as one of the most famous pieces of cinema music. It's the ultimate hum-worthy representation for impending doom, one that has been parodied in every type of media. It's impossible to dispute the major impact a film like Jaws has had on horror movies that came after it. One of the most significant examples of this is the wave of "copycat" films attempting to hone in on the popularity of water-dwelling creatures, from sharks to orcas to squids. So much, in fact, that there is now a legitimate subgenre of horror-related specifically to sharks. How these movies have influenced and added to society's viewpoint and fear of these animals is one that is multi-faceted and worth a deeper dive.

Like many blockbusters, the sequels that followed Jaws did not equal the hype of their predecessor, even with Jaws 3's attempt to cash in on the then-new popularity of 3D. Regardless, the sequels took themselves seriously, holding to the standard of scaring audiences away from any body of water larger than a puddle. As the genre began to evolve, so did the mindset and mood of the portrayal of sharks. Filmmakers wanted to push the envelope beyond terror and embrace the possibility of fun and adventure, and moviegoers were craving a crazier experience that lent to this in perfect fashion.

One of the most notable examples of this came with 1999's Deep Blue Sea. The plot itself was inarguably over the top, centering around a group of scientists researching Mako sharks in search of a cure for Alzheimer's. Things quickly go awry when the genetically engineered sharks they're studying begin wreaking havoc on the facility and its human inhabitants. The movie starred LL Cool J, and also featured two of his songs in the soundtrack, greatly appealing to a younger audience than others of its kind had before. Like Jaws, it also had less successful sequels, with the second installment debuting on direct-to-video, and a third following in 2020.

The plausibility of plot started to become irrelevant with movies within this budding subgenre. In fact, the more unbelievable and ridiculous the story, the more fans gobbled it up. None is more famous for this than Syfy Channel's Sharknado.

Released directly to television in 2013 and becoming an overnight phenomenon, the movie gave a new definition to the phrase "so bad, it's good." While the filmmakers stated that at least part of their intent was to make a serious movie, those who watched saw it as pure comedy. Instead of being panned for its implausible plot, it was hailed by both viewers and critics alike for the escapism of an experience that could only be described as pure, mindless fun. Several sequels soon followed, each one attempting to out-do the other in sensationalism. This time, franchise creators leaned completely into the humor and camp. It was full-on what you see is what you get, and fans couldn't get enough. Celebrities tweeted about it, meteorologists included it in tongue-in-cheek weather reports, and compilations of the most ridiculous scenes could be seen on every clip show.

Even with the new, lighter take on sharks, movies and television still largely portrayed them as the horrific apex predators we've been conditioned to fear for decades. There was a hefty succession of releases after the Sharknado phenomenon that left us wanting to stay on the safety of sandy shores instead of jumping in for a refreshing ocean swim. Many of those had respectable box office success, such as Open Water, The Shallows, 47 Meters Down, and The Meg.

And then there's Shark Week. No programming blends together both the silliness and fun of Sharknado and the anxiety and terror of Jaws better than the Discovery Channel's annual celebration. It's an event fans look forward to all year, holding viewing parties and all-day binge-watching.

It's hard to imagine a time when there won't be some kind of shark-related media to digest. Audiences have shown no sign of weariness with this subgenre, and creators are more than happy to keep delivering the jump scares. From that first shot of a fin gliding silently through the water in Jaws to the swirling vortex of a shark storm in Sharknado, we have decades' worth of material to sink our teeth into. Whether we want to just dip our toe in or dive headfirst depends on how afraid we are to see what's just beneath the surface.