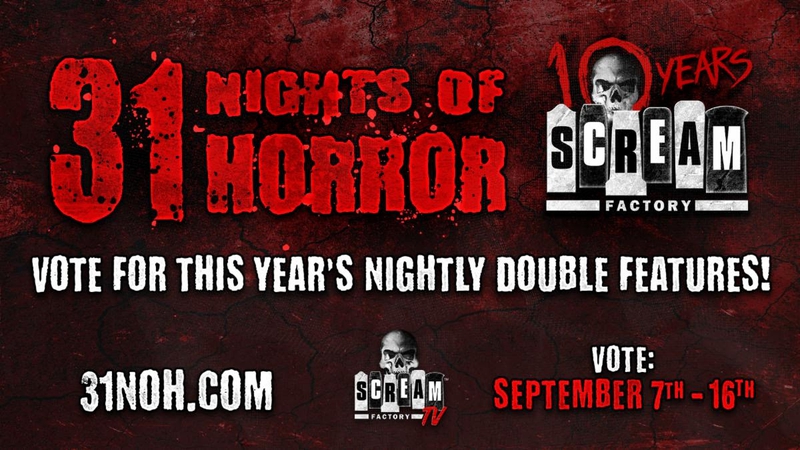 Get those votes in!

Scream Factory is a name that die-hard horror fans are undoubtedly familiar with, particularly those who love physical media. A division of Shout! Factory, the company has done an outstanding job over the last decade bringing cult classic horror flicks to life on Blu-ray, in many cases, for the first time. I mean, they made Alligator available in 4K for goodness sake. To celebrate the company’s 10th anniversary, they’ve decided to get the fans involved by letting them vote on a series of double features for what they’ve dubbed 31 Nights of Horror.

You might be asking yourself, how can I get involved and let my voice be heard? We’re glad you asked! From September 7th through 16th, fans can head over to 31NOH.com to vote for the top five flicks from the entire Scream Factory catalog. Some of the titles in the running include Alligator, Alligator II, Road Games, Dead Space, Bad Moon Witchboard, Ben, Black Christmas, Day Of The Dead, The Company of Wolves, Chopping Mall, Night of the Demons, The Monster Club, The Slumber Party Massacre and Slumber Party Massacre II. What’s more, a few fans will even have a chance to win a Shout! Factory shopping spree. There will be ten prizes overall, with one $500 shopping spree, two $250 shopping sprees, two $100 shopping sprees, and five $50 shopping sprees.

As far as the actual 31 Nights of Horror shenanigans go, starting October 1st, fans can tune in every night at 6pm PT/9pm ET to see if their selections end up making the cut. The really cool part is that both the uncensored and broadcast versions will be streamed for your viewing pleasure. You can tune in to watch the uncensored versions of the double features on Scream Factory TV, or watch the broadcast versions played simultaneously on Shout! Factory TV.

Scream Factory, for most of its existence, has been primarily a haven for genre fans to spend some hard-earned dough on high-quality Blu-ray releases of classic films. But Scream Factory TV has brought the brand into the modern age, offering a 24/7 stream of horror, sci-fi, and thriller films. Aside from being available via the website itself, the app is available on Amazon Fire TV, Android, Apple TV, and Roku. The point is, it’s pretty easy and convenient to watch. And it doesn’t cost anything, which is nice given how many streaming services we have to choose from these days.

Those interested in voting can do so right now by heading over to ShoutFactoryTVLive.com.