ALLIGATOR Is Finally Easy To Watch!

Ramón is on the loose (in 4K UHD to boot), thanks to Scream Factory 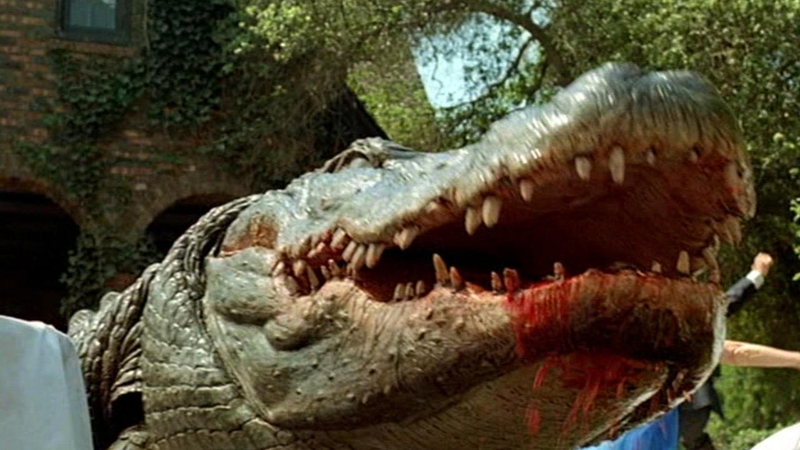 The success of Jaws inspired so many copycats that there is probably a "Definitive Guide" type book out there that inadvertently misses more than a few. On, of all things, the Criterion Collection release of Hausu, director Nobuhiko Obayashi claims his film is also inspired by Jaws, but in that he tried to invoke the same sort of fear and dread that the film inspired in him, rather than copy the template with a different animal as many others did. "A hit movie about a shark attacks leads to one about bear attacks. That's the best they can do," he notes, a brutal but absolutely correct assessment. You name an animal, there was probably a movie produced between 1976-1981 that had one going rabid/growing larger than normal and attacking folks at random.

A lot of them aren't exactly high art, but most at least provide some entertainment, sometimes if only to wonder how it is the film escaped the wrath of Universal and/or Spielberg's lawyers (who did manage to get one film, the Italian ripoff titled Great White, pulled from theaters, and even now it remains difficult to legally release in the US). However, one film was noted even then as being notably better than most of its brethren: 1980's Alligator, which was directed by Lewis Teague and written by John Sayles, who had already gone down that road with Joe Dante's Piranha. Its legacy is enviable; the film impressed Stephen King enough to back Teague as director of Cujo, and Quentin Tarantino was so enamored by it that his film Jackie Brown is actually an unofficial sequel of sorts, with Robert Forster's Max Cherry character being, in his mind, the same one actor Forster plays here. 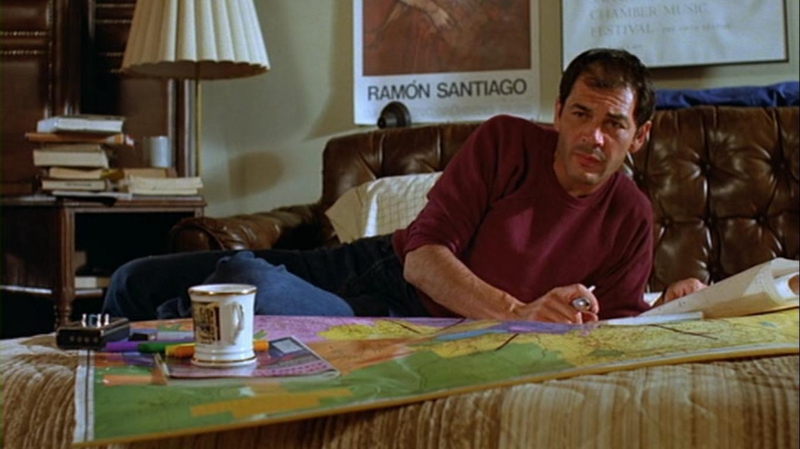 That bit of trivia delighted Alligator fans like me but probably frustrated 90% of the people who were interested when it made the rounds after Forster passed away in 2019, because the film had been out of print for over a decade. It was released on DVD by Lionsgate all the way back in 2007, but the studio never bothered to upgrade to a Blu-ray, nor did they make the film available for any of the streaming services. Unless you held on to your DVD (I did!) or wanted to pay a premium from a third party seller, you were unable to not only enjoy seeing the Tarantino connection for yourself, but you were also denied the opportunity to watch one of the great post-Jaws monster movies.

Thankfully, as they often do, Scream Factory has come to the rescue. Not only did they announce a special edition, but they skipped past the Blu-ray format and gave us a bonafide 4K UHD release - a pretty striking one at that. This was not a big-budgeted movie by any means (per Teague, when ABC paid three million for broadcast rights, it more than covered the cost of the film in the first place), but it looks as good as any of the major studio films from the time look on the format. It's almost kind of a shame so few have been able to see the film at all; you can truly appreciate how good it looks when you've been stuck with a lowly DVD for the past fifteen years! 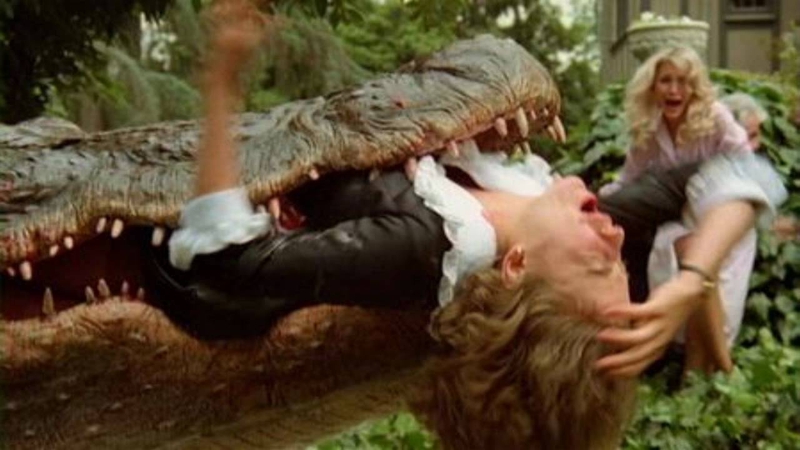 It's also packed with extras, including an older commentary with Teague and Forster (moderated by Fango pal Del Howison of Dark Delicacies fame) that is a true joy to listen to, with Forster noting that he counts it on his short list of films he loves and loved making. It also has new interviews with Teague, Sayles (along with an older one for good measure), leading lady Robin Riker, and FX man Robert Short, plus the TV cut of the film that has a few extra scenes (you see kids, back in the day, there were so *few* commercials that films often had material added back to pad the runtime) and some promotional material. There's also a lengthy interview with one of the film's production assistants, which normally means that they're really reaching to find anyone to talk about the movie, but I guess we can let it slide as this particular PA is none other than Walter White himself, Bryan Cranston.

Yes, 35 years before he faced off against Godzilla (however briefly, grr), Cranston - then a struggling actor who was looking to do something different - took a PA gig on the film, and then leapt at the chance to be (as he refers to it) the "assistant's assistant's assistant" in the FX department, where his primary gig turned out to be packing the gator dummy with Karo syrup and other "guts" for the scene where it explodes. Cranston is clearly delighted to be talking about his early grunt work, laughing his way through the memories for the first half of his interview, but when the talk turns to Forster, the piece becomes even better. It turns out one day, they rode together in the shuttle on the way to the set, and during the ride, the veteran actor asked him about his job with genuine interest and encouraged him to stick with it. Obviously, he did, and things became full circle when Forster ended up taking on a memorable guest star role on Breaking Bad (I dare not spoil the contents of Cranston's anecdote about their reunion, only to say it's kind of perfect). Cranston legitimately credits his time on Alligator for all of the success that he's rightfully found since, and I have even more respect for him for appearing on a "B-movie" Blu-ray to share his experiences. 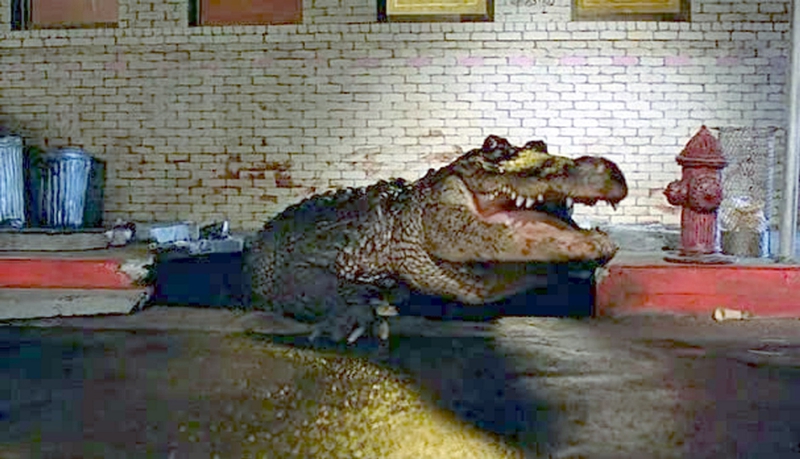 But obviously, the film itself is the main draw of the set, and I'm happy to report it's just as fun to watch as it was the first time around. What really makes the film special - and why it has held up as well as it has - is that Sayles gave Forster and the rest of the cast memorable and fun characters to play, where even the human villains (the gator became oversized due to a company that was testing a growth serum on animals and disposing of the remains in the sewer, where Ramón fed on them) have their charms. Sayles also wisely breaks away from the Jaws template as often as possible; most notably (spoiler) killing off the would-be Quint character almost instantly and having their "Hooper" (Riker's character) be the love interest for Forster's embattled cop. Their courtship is so charming and genuine, I could almost see myself enjoying the movie just as much if it was a romantic film about the two of them, no alligator whatsoever.

However, then I'd be denied some A+ carnage! Teague employed a few amputees to play victims, giving the attack scenes some truly horrifying visuals (unlike Jaws, this film got an R, and how!), and while a few miniature/forced perspective shots of the gator aren't perfect, for the most part, they do a pretty great job of handling what was - like his pal Bruce - an apparently temperamental practical model. The TV cut even kind of improves one scare in a weird way, as it adds a scene of Ramón entering a backyard and seemingly eating a kid, only for the hysterical mother to find her child hiding under a laundry basket. This sort of lets our guard down, assuming this is the kind of movie that won't kill a kid... only for our suspicions to turn out very, very wrong ("Walk the plank!").

I couldn't be happier that the film is finally available for all to see. In addition to the 4K set (which has a regular Blu-ray with all the extras, for those who haven't upgraded yet) it's also on Roku and Amazon HD, meaning even those who are physical media-phobic can finally join in the fun. Forster rarely got to play lead roles in mainstream fare like this, so if you're a fan of the actor (why wouldn't you be?) I can practically guarantee a good time, and for my fellow fans, I'm relieved to tell you that Scream Factory "understood the assignment", as they say, and delivered one of their best releases in years. Viva la Physical Media!