Giving Up The Ghost(s): The Frightful/Delightful FX Of SCROOGED

As we mourn Richard Donner's passing, we revisit an old favorite. 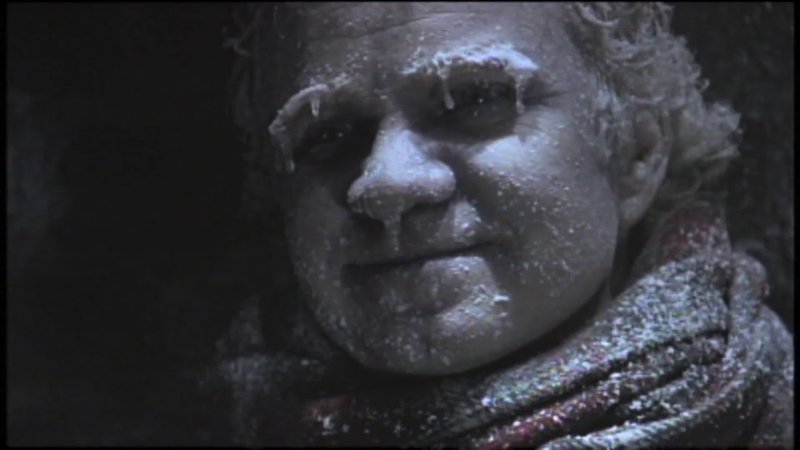 Editor's Note: this article was first published in December 2019. We are sharing it again today as we say goodbye to the beloved and brilliant director Richard Donner, who passed yesterday, July 5, 2021.

Somewhere between serving as the Executive Producer on The Lost Boys and declaring “Diplomatic Immunity” with Lethal Weapon 2, prolific director Richard Donner tackled one of the most beloved and timeless tales ever – Charles Dickens’ A Christmas Carol. But instead of taking the traditional route, Donner relied on the comedic stylings of none other than Bill Murray to be the focal point of his hilarious take on one of the most iconic Christmas stories ever told.

When it came time to tackle the effects for Scrooged, Richard Donner reached out to Tom and Bari Burman, who had collaborated with him years prior on The Goonies. “We loved working with Richard,” said Bari. “He called me up one day, and told me he had this script he wanted me to take a look at for this movie called Scrooged. He said there wasn’t any makeup in it, but he still wanted me to take a look anyway and come on as the department head.”

“So, I read it, and I was a little confused because there were all these ghosts and everything. I gave it to Tom and he goes, ‘What do you mean there’s no makeup in it? There’s a lot of makeup in it!’ So I called Richard back and said, ‘Dick, there’s a lot of makeup to do for this.’ As it turns out, he was just joking, and was trying to pull one over on me. But the best part of Scrooged was that we had total freedom on it. Tom’s strength as an artist is inventing; he’s not the person that you’d want to do the same thing every day. With Scrooged, he got to try a lot of new things.”

For Scrooged, the Burmans had the opportunity to create a variety of different makeups, with each of the apparitions brought to life (or to the “undead,” so to speak) through an array of makeup techniques that showcased Bari and Tom’s own personal skill sets. 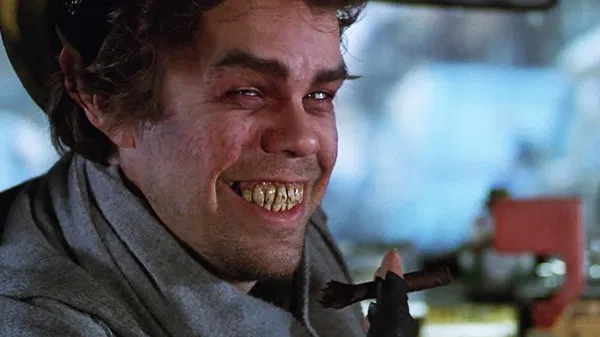 “The great thing about working with Richard is that he’s extremely open, so he gave us a lot of freedom to do different things,” Tom explained. “For the Ghost of Christmas Past,  we gave Buster [Poindexter] some ears and fake teeth, and created a subtle makeup for him. Bari worked mainly on Carol [Kane] to turn her into the Ghost of Christmas Present. For the Future ghost, we made this six-foot long mechanical hand, which looks great. But there was a lot of work that almost didn’t turn out the way you see him in the film.”

“We had started making this skeletal head and those lost souls puppets that were in his chest, and Richard called me up and said, ‘Tom, we’re not using the head anymore. We want to use a TV screen instead. And the lost souls are out, too, so we can do it all on video.’ I told him that we were almost finished with the lost souls, because I felt like we should at least have them as part of the character, but he told me that they were out. So, I went ahead and finished them anyhow.

"We were on set a few days later, I went over to Richard and told him that I wanted to show him something. When he finally had a moment between set-ups, he comes over to me and says, ‘Alright, Tom. Show me what you got.’ I had my guys behind a table, operating the puppets, and I could see him holding back a smile. He looks at me and says, ‘Okay. So, they’re back in the movie. What else do you want?’ That moment felt pretty great.” 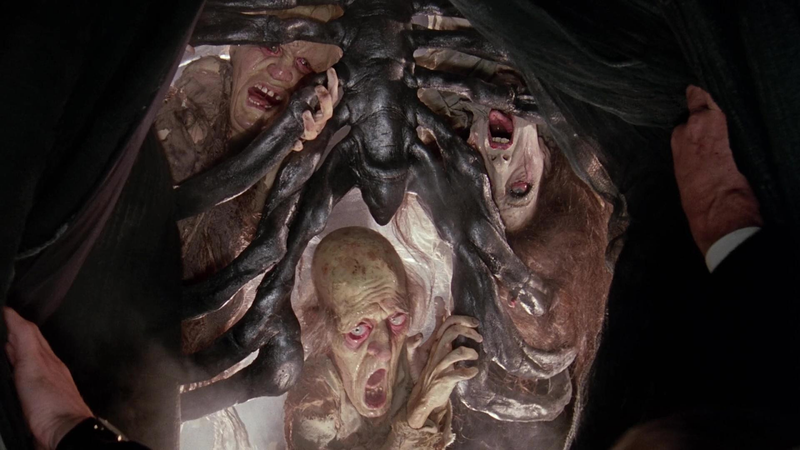 One of Scrooged’s most ambitious characters came in the form of Lew Hayward, played by legendary television actor John Forsythe. The deceased boss of Frank Cross makes an appearance in his protégé’s office one fateful night, and informs Murray’s character that he’s about to be visited by a trio of spirits who will help teach him the true meaning of life. Because of Lew’s status as someone who is no longer amongst the living, Tom decided to do something a little bit different than your standard run-of-the-mill ghost for Forsythe’s memorable character.

Tom discussed his approach to the design of Lew, saying, “One of my favorite things to do is to mix comedy and horror, because that gives you the opportunity to do something silly and something you don’t expect all at the same time. For Lew, I didn’t want to just create another ghost like we’ve seen so many times before. I wanted something funny, something memorable and something that you wouldn’t soon forget either.

“So, we decided to make him look more like a corpse, complete with all that dust and covered in spider webs. We thought something that would really play up the comedy was if he was dressed like he just came off the golf course, and I think it works great in the film. The gag in his head where the mouse comes out was just something that came to me. I hadn’t seen anything like that before, and I thought it would make for a really fun moment. But John Forsythe, who was just the sweetest man, he was so patient during the makeup process. John didn’t have to agree to be done up, but he did, and I think at the time, he was around 71-years-old. He never once complained.“ 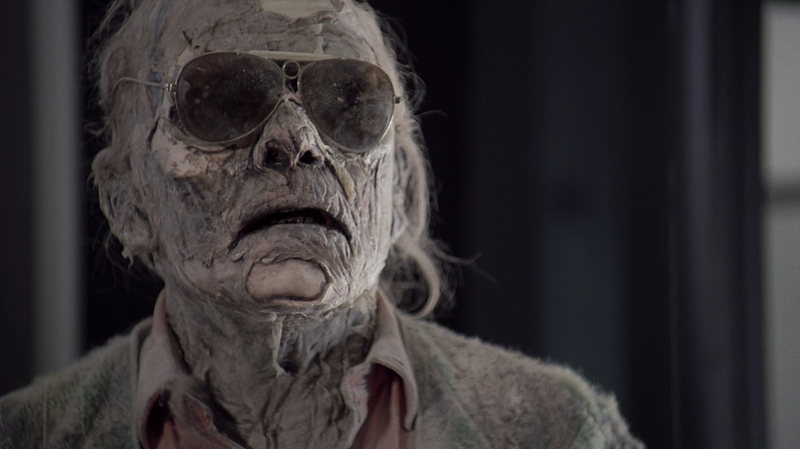 Tom’s contributions to Scrooged extended beyond the realm of special effects. As it turns out, the film features numerous moments of Murray improvising dialogue and Tom offered up an idea that became another indelible moment in the offbeat comedy.

“One day, Richard and Bill were in the makeup trailer and they were working out the scene when his character Frank throws the water on the burning waiter at lunch,” recalled Tom. “They weren’t sure what Bill was going to say, so they were tossing ideas around. I was at the other end of the trailer, and I said, ‘I got a line that you could say.’ Bill turns to me and says, ‘Oh, you have a line? You’re the makeup artist. We’re talking about script right now. You just talk about makeup, okay?’ So, I just went back to what I was doing.”

“Richard and Bill continue to go back and forth, but they just couldn’t figure it out. After a few minutes, I spoke up again. ‘Guys, I’ve  got a line.’ Richard turns around and says, ‘Didn’t you hear Bill?’ I didn’t care. ‘Do you want the line or not?’ So, Richard asked me what the line was, and I said, “If it were me, I would say – I’m sorry. You know, I thought you were Richard Pryor.’ Bill Murray turns around and says, ‘I would never do that. Richard Pryor’s a very good friend of mine and that’s disrespectful.’ To me, I just thought it was a funny line.”

“But sure enough, we’re doing the shot, Bill throws the water on the guy, and he goes, ‘Oh, I’m sorry. You know, I thought you were Richard Pryor.’ I couldn’t believe it. I was walking around, feeling pretty good about giving them one of the funniest lines in the movie, but they didn’t give me any credit. It figures (laughs).”

While Donner might have been short on verbal accolades during the production of Scrooged, the Burmans knew the director appreciated their efforts, and showed his support when they were given their due by the Academy when they were nominated for the Best Makeup Oscar alongside several other legends that year.

“Richard was so happy for us,” said Bari. “Personally, I was thrilled that they recognized everything that Tom and I put into Scrooged. It was a very exciting time for us, and I even got to take my mom and my dad to the Oscars. It’s always wonderful to be acknowledged for your work, especially that year, because the work that was competing was top notch. You had Rick [Baker]’s makeups for Coming To America, which were wonderful, and all those great makeups for Beetlejuice, too (which won). I was a little disappointed that we didn’t win, but I’m proud of the work that we did.

“Something else that I’m proud of is our relationship with Richard. He recently said, ‘The thing about the Burmans is that if you hire them for your film, you never have to worry about the effects. Working with them frees you up to focus on everything else, because you know they’ve got it covered completely.’ He knows that we listen to what he wants and then we make it happen. It’s always wonderful to be valued, and Richard knew that on Scrooged, much like The Goonies, he could trust in us to come up with great ideas and great characters.”‍