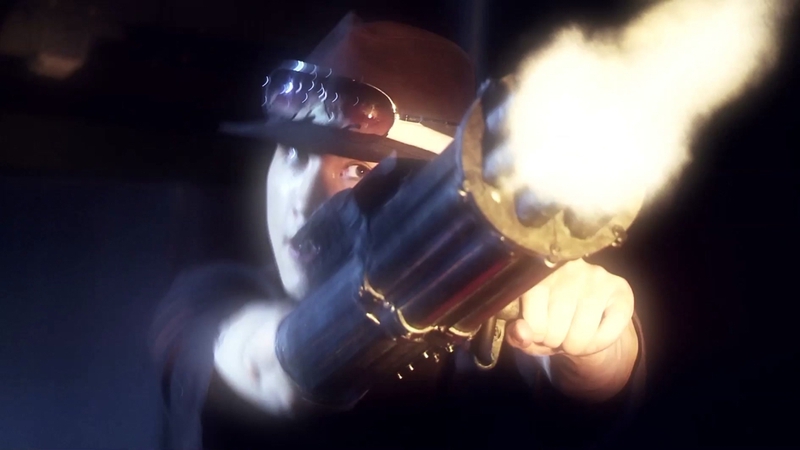 Editor's Note: This was originally published for FANGORIA on July 12, 2011, and we're proud to share it as part of The Gingold Files.

Yakuza Weapon the movie is kind of like its protagonist, Shozo Iwaki (Tak Sakaguchi). He’s a mob boss’ son who gets heavy artillery grafted onto him to blow people away, and the movie pieces together bits and influences from past movies to blow audiences away. It’s the most over-the-top entertaining film to come out of Japan’s Sushi Typhoon company since Alien vs. Ninja (reviewed here, and with which it shares action director Yuji Shimomura).

Playing at both the New York Asian Film Festival and Montreal’s Fantasia, Yakuza Weapon was co-directed by cult-fave action star Sakaguchi and Yudai Yamaguchi, with whom the actor previously collaborated on Versus and Battlefield Baseball; the duo also teamed on the latter’s current follow-up/variation Deadball. (That movie is also premiering at Fantasia, and shares a few faces and similar scenes with Weapon; both include very funny gags involving phones.) Their attitudes mesh perfectly in Weapon, in which Sakaguchi’s Shozo goes to any extreme to get the job done, and so does Yamaguchi. If all the excess gets, well, excessive at times, there’s a constant inventiveness that assures there’s always a good laugh or cheap thrill coming around the bend.

Scripted by the duo based on the manga by Ken Ishikawa (itself a takeoff on the much more straight-faced yakuza movies by Kinji Fukasaku et al.), Weapon sees Shozo called home from the jungle—where, as we’re shown with great glee in an opening sequence, he’s kicking much ass—after his dad is killed. Seeking to avenge that death, Shozo runs up against an assortment of crazy characters, most notably upstart mobster Kurawaki (Shingo Tsurumi), who’s anxious to usurp the top spot among the city’s gangsters. There’s some discussion about the yakuza’s code of loyalty and honor, but it’s mostly just pretext for that code to be broken, as the conflicts escalate to absurd dimensions. And that’s even before Shozo loses an arm and a leg, and receives the operation that gives the movie its title—grafting what looks like a miniature Gatling gun to his arm and a rocket launcher into his leg. Now the poop is really gonna hit the fan, along with gouts of blood blasted from Shozo’s enemies.

The extreme bloodshed in films like this can get sadistic without the right hand at the helm, and Yamaguchi maintains the right live-action-cartoony tone to keep the constant mayhem entertaining. (It helps that it’s largely bad people who get splattered, all courtesy of Sushi Typhoon’s resident gore master Yoshihiro Nishimura.) The director also demonstrates an awareness that when it comes to a movie like this, variety is not just the spice, it’s the meat and potatoes too. The staging and details are consistently inventive, reaching their peak during a four-and-a-half-minute shot in which Shozo roams through a building taking on multiple groups of thugs, the combat ranging from hand-to-hand kung fu to gunplay to swordfighting, all in one remarkable take.

Sakaguchi finds the right demeanor too in his portrayal of Shojo, who is driven and brazen but occasionally self-deprecating and basically not very bright. His deadpan shrugging off of all the bodily damage he endures is a fun running joke, as when he simply responds, “Ouch” when he’s hit on the head by a…nope, don’t want to give that one away. Everyone else in the film plays their roles to the hilt, though not so much that the scenery-chewing becomes obnoxious. While there’s not as much pulchritude on view as usual in Sushi Typhoon flicks, fans will appreciate the brief but memorable appearance by company regular Cay Izumi, who…nope, not gonna give that one away either.

Along with the yakuza genre, references to past Japanese cyber-body-horror opuses like Tetsuo and Full Metal Yakuza are sprinkled throughout Yakuza Weapon as well, though it’s all done with a lightheartedness that’s poles apart from the nihilism of Shinya Tsukamoto and Takashi Miike. Even with all the goofball imagination on view, the tone does flag every so often, and the film could have used a bit of trimming to be made even leaner and meaner. Despite these occasional lapses, though, Yakuza Weapon is literally a blast.