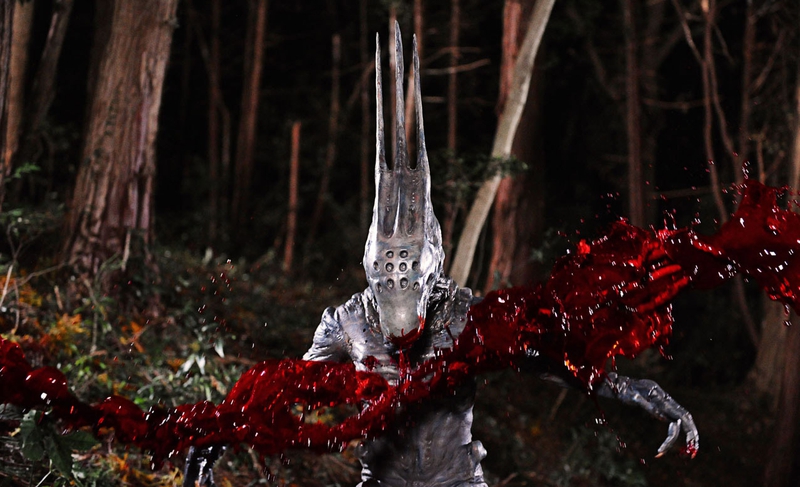 Editor's Note: This was originally published for FANGORIA on July 9, 2010, and we're proud to share it as part of The Gingold Files.

If you see only one movie this summer in which extraterrestrial hunters duke it out with well-armed humans…well, to see the better one, you could have attended Alien vs. Ninja’s world premiere last weekend at the New York Asian Film Festival, or if you’re in the Montreal or London areas, you can catch it at the Fantasia film festival or Film4 FrightFest respectively. Or keep an eye out for further fest dates, because this one’s a rollicking, bloody good time that benefits from an enthusiastic audience.

The opening “AVN” title card throws down a gauntlet, and indeed this feisty little Japanese flick packs more entertainment value in any 10 minutes than all of either AVP or AVP—R. Part of the reason is that it gives the audience what it wants from a movie of this type: lots of As fighting Ns, and, before the alien invasion begins, Ns fighting Ns. The sword-swinging, star-flinging stealth warriors are having a high old time cutting up among the bamboo groves when they’re interrupted by a fiery meteor that crashes to Earth nearby. Needless to say, they investigate, and are soon crossing paths and appendages with green, rubbery beings—resembling crosses between H.R. Giger’s xenomorph and a bathtub toy—that want to kill them, eat them, impregnate them or some combination thereof.

That’s really all there is to the plot, though it’s worth noting that a couple of the characters are conspicuously borrowed from James Cameron’s Aliens: Nezumi, a cowardly wisecracker in the Bill Paxton mold, and Nishi, a kid who has survived the monsters’ first attack and is protected by the ninjas. Our hero and heroine are Yamata (Masanori Mimoto) and Rin (Mika Hijii), and both of them can really kick ass and take names and look great doing it. They seem able to hold their own against the aliens, but the critters could be said to have new tricks up their sleeves, if they wore sleeves. They implant little pink offspring in human victims, turning the hosts into possessed slaves, and so not only do Yamata and co. have to slay the critters, they have to restore their overtaken comrade Jinnai to normalcy as well.

Coming up with a consistent series of new cinematic tricks is essential for such an over-the-top project to keep an audience entertained and avoid running in place, and Alien vs. Ninja writer/director Seiji Chiba and action director Yuji Shimomura are up to the challenge. They provide a consistent string of physical gags, impressive stunts and exaggerated gore that keep upping the ante and providing a lot of silly laughs along the way. The staging and camerawork complement each other, instead of the filmmakers trying to create artificial excitement via overediting, and while no one’s going to mistake the extraterrestrials for Giger/Rambaldi/Winston creations and some of their mutations for anything but CGI, the movie as a whole maintains a stylized tone that makes the artificiality moot. At the same time, Chiba and the cast don’t tip everything over into spoofery; it’s all played straight, which is essential for this kind of goofiness to pay off over the course of a feature-length running time (even a relatively short 81 minutes).

It’s de rigueur to say that a movie like this is not exactly art, but it also must be noted that there is, if not an art, then a craft to making a goofball flick that sustains interest and entertainment value throughout. Lord knows, we’ve all seen any number of movies like this wear out their welcome by the half-hour mark, but Chiba and co. find the right balance in Alien vs. Ninja. The aliens are cheesy, the ninja are not, and it all adds up to above-average turn-off-the-brain entertainment.