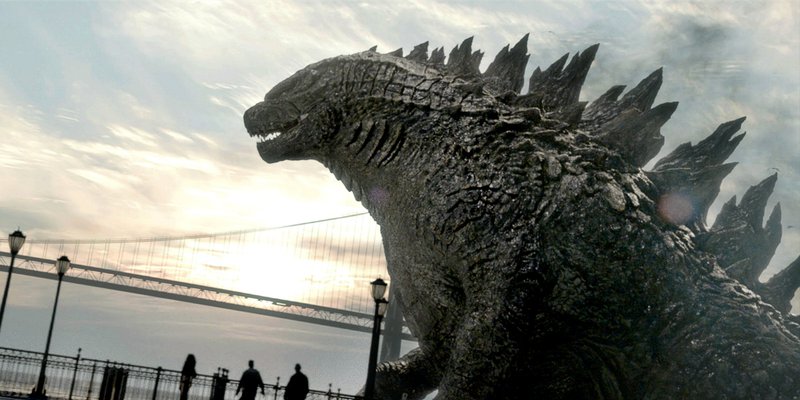 Editor's Note: This was originally published for FANGORIA on May 12, 2014, and we're proud to share it as part of The Gingold Files.

The American reboot of Japan’s most famous monster is not so much a great Godzilla movie as a great movie about Godzilla—a subtle difference, but one that’s crucial to Gareth Edwards’ spectacular and powerful film.

The above is another way of saying that what you may have heard is true: The movie’s titanic central character takes his time fully showing himself, and doesn’t always get the star treatment. While that might frustrate some expecting an old-fashioned monster mash (though they should remember that some of the old Toho films were sporadic and sparing with the creatures too—watch Destroy All Monsters again if you don’t believe me), Edwards is after something, pardon the expression, bigger. His Godzilla is concerned with how humanity in general and a small group of people in particular deal with a walking natural disaster, with explicit echoes of terrible modern tragedies.

Scenes involving the destruction of a Japanese nuclear power plant, and the ghost town it leaves behind, evoke the horrific situation in Fukushima, and Edwards later stages a tsunami setpiece calling up memories of news footage from Thailand 10 years ago. In this way, the director and screenwriter Max Borenstein make Godzilla relevant in a way that hasn’t been seen since the original 1954 Gojira, while stopping short of loading the film down with political subtext. Edward isn’t out to make a statement, but to use this iconography to engage and enthrall the audience in ways that probably wouldn’t even occur to some of the other modern makers of big special-FX vehicles, who seem content to simply bludgeon the viewer into submission.

That carries over to Edwards’ presentation of his creatures (yes, there are more than one, which is probably not a spoiler by this point). Godzilla et al. are often seen through windows and windshields and on various video screens—the way we puny humans would view them if they were to show up in our city—or in the backgrounds of shots as people attempt to escape them or make efforts to stop them. This adoption of a personal point of view won’t surprise anyone who admired the director’s debut feature, the indie breakout Monsters, and they can be assured that once the action literally heats up, he doesn’t play as coy with his big beasts in this much more expensive and expansive production. While taking a subtle approach to Godzilla at certain times, he also makes sure to give the Big G plenty of destruction time, along with a couple of hero moments that had a preview audience cheering.

With just his second movie, Edwards proves not only capable of handling the demands of an epic production, but of evoking a sense of awe and astonishment redolent of the Spielberg/Lucas golden age, well before the monsters show up. At a time when many big-ticket fantasy flicks jump right into the action after just the title, he also knows the value of a mood- and theme-setting opening-credits sequence, here devised by Se7en’s Kyle Cooper. We’re then introduced to a scientist played by Ken Watanabe (whom the filmmakers name Ishiro Serizawa, God bless ’em), and his associate, Dr. Vivienne Graham (Sally Hawkins), as they visit a remarkable and very large discovery in the Philippines, and then to Joe Brody (Bryan Cranston), a nuclear engineer working in Japan, and his family. Something soon happens that tears that brood apart, and years later, Joe’s son Ford (Aaron Taylor-Johnson) is a Navy explosives expert estranged from his now paranoid, conspiracy-crazed dad.

The two are destined to reunite, of course, and their scenes together comprise the best human element in Godzilla. Circumstances eventually lead Ford on a quest to help stop the monstrous threat, and Edwards and Borenstein just manage to get away with always having him in the right place at the right time to continue his mission. Elizabeth Olsen is as empathetic as ever but rather overqualified and underutilized as Ford’s wife Elle, a nurse whose skills get a decided workout in the story’s latter sections. Watanabe brings the proper gravitas to his Dr. Serizawa, who, as opposed to his Gojira namesake, believes in letting nature take its course rather than interfering. Demonstrating that Edwards is not above adhering to time-honored tropes, this puts Dr. Serizawa at odds with Admiral William Stenz (David Strathairn), who believes a well-placed nuke will take care of the problem; Strathairn finds the right shadings for his role to keep that conflict from becoming too one-sided.

If the characters don’t always have the depth one might hope, Godzilla redeems that factor by never losing general sight of the people caught up in its catastrophes. As opposed to some recent megapictures in which entire cities are demolished with no thought given to the attendant loss of life, this one acknowledges that action scenes have consequences. At the same time, those scenes are pretty freakin’ awesome—composed and assembled for maximum impact by Edwards, cinematographer Seamus McGarvey (who did the honors on The Avengers), editor Bob Ducsay and visual FX supervisor Jim Rygiel, the latter of whom marshaled an enormous team to convince you that Godzilla is really there and rampaging through his every second on screen. Whether there are enough frames of him in this movie may be open to debate by some viewers—but as one of its very last shots reinforces, there are always going to be differing opinions where Godzilla is concerned.