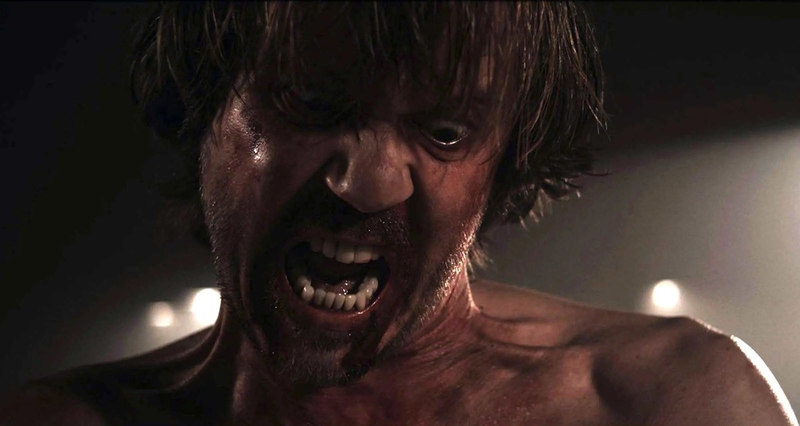 Editor's Note: This was originally published for FANGORIA on July 15, 2010, and we're proud to share it as part of The Gingold Files.

A Serbian Film, playing at Montreal’s Fantasia festival as part of the Subversive Serbia series, is one of those movies that confounds simple reactions. Even as a die-hard horror fan, I found parts of the film too much to stomach—especially in the last half-hour, which left me feeling that director/co-writer Srdjan Spasojevic was indulging in grotesque shock-provocation for its own sake. And yet I can’t deny the power and the skill with which he spins the bulk of his story.

But there’s a twist: The male lead in the adult flick is the child’s father, Milos (Srdjan Todorovic), who retired from that game years ago, but is now having trouble making ends meet for his family. Thus, he finds it hard to resist an offer by a mysterious man named Vukmir (Sergej Trifunovic), who wants Milos to come back to his old profession and star in a very unique production for a very large sum of money. The catch is that Milos will not know what’s involved in the project until he’s there performing it live for Vukmir’s cameras. It all sounds a bit dodgy, but money is money and after all, Milos got up to some pretty raunchy stuff in his past flicks. So he signs on, shows up at the appointed time at the appointed place and…

Well, let’s just skip ahead to the point where Milos wakes up in a park, having clearly been through the wringer, a camcorder in his hand. With no memory of what transpired the previous night, he rewinds the tape, starts watching—and he and we are made witness to an odyssey through utter deviance. There are scenes in A Serbian Film that push boundaries that some fans of transgressive cinema might not have even known existed; one of the most shocking actually arrives at the movie’s halfway point, where we first get an inkling that Vukmir is far more perverted than we or Milos could have imagined. Spasojevic, who scripted with Aleksandar Radivojevic, has justified this moment in terms of a metaphor that doesn’t quite come through for non-Serbs; others have maintained that the not entirely convincing makeup FX involved somehow soften the blow. But whether this bit is technically convincing or not, the basics of what’s being portrayed make it repellent, disturbing and deeply difficult to watch.

There are a number of acts like that, both violent and sexual, in the last few reels of A Serbian Film, and Spasojevic clearly intends to outrage anyone and everyone within viewing distance. And yet he’s just as clearly more than an exploitationeer wallowing in nasty stuff and gleefully holding it up to the audience. You’ll notice I linked “we and Milos” a couple of times in the preceding paragraph, and the fact that the viewer discovers many of the horrible truths of the protagonist’s degradation alongside Milos himself—watching the tape while he does—is crucial to Spasojevic’s method. Rather than simply turn the audience into objective witnesses of visceral gross-outs, the director involves us directly and emotionally in Milos’ horror this way, and Milos’ reactions are just as repulsed as ours. Beyond this command of point of view, the imagery and pacing throughout A Serbian Film are first-rate, with credit also going to cinematographer Nemanja Jovanov and editor Darko Simic, not to mention the remarkable performance by Todorovic and the down-to-the-bone sleazy turn by Trifunovic.

It’s in the film’s final reels, when Milos sets out for…vengeance? redemption? simple catharsis?…that things get most troubling. Describing what happens would not only be unfair but might get this page shut down, but suffice to say that the film takes a tumble down into a further level of personal hell, with the most unspeakable act no less unnerving—perhaps more so—because you can see it coming. It reaches a point where you start to wonder if Spasojevic’s grotesquerie are truly necessary to the narrative; where that point is will depend on your individual mindset. Just speaking for myself, there were a few moments where I just wanted to turn off from A Serbian Film—and yet the movie had established a dramatic hold strong enough that it wasn’t so easy. I came away from it disgusted on some levels but impressed on others, appreciating having seen it even though I’m pretty sure I never want to see it again. I’ll simply end with this: If, after reading this review, you believe A Serbian Film is your kind of cinematic experience, by all means proceed—but don’t say you weren’t warned.