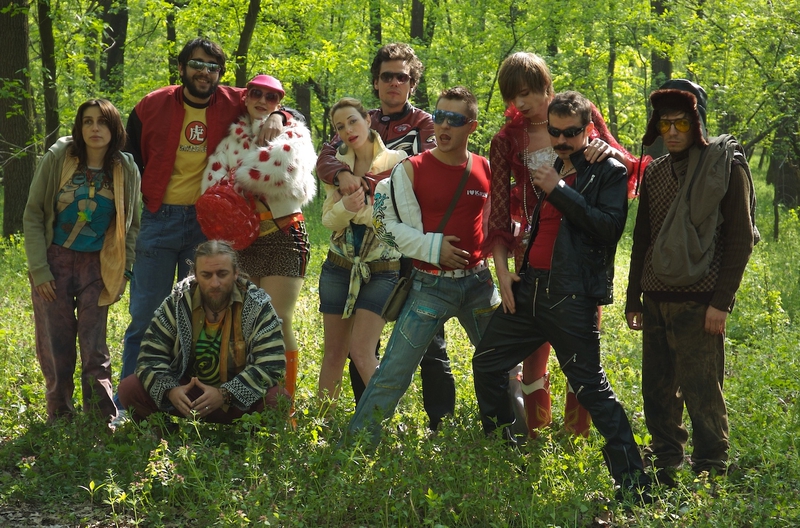 Editor's Note: This was originally published for FANGORIA on July 12, 2010, and we're proud to share it as part of The Gingold Files.

But then, sensitive viewers wouldn’t sit down for a movie with a title like this in the first place, and writer/director Mladen Djordjevic isn’t after them anyway. He has crafted a confrontational film that addresses the harsh realities of Serbia over the last decade or so, through the framework of a pseudo-mock-documentary centering on film school graduate Marko (Mihajlo Jovanovic). The first 15 minutes are so are comprised of his “video diary” in which he describes his creative goals and documents his attempts to achieve them around the turn of the Millennium. Unfortunately, he can’t find much support for the allegorical science fiction epic that’s dear to his heart, so he winds up shooting commercials before falling into the world of pornography. From early in this opening vérité section, the turmoil of the outside world peeks into Marko’s, from the bombing of Belgrade to the fall of Slobodan Milosevic.

When Marko squanders some of his adult-film backer’s money, he is forced to hit the road with his girlfriend Una (Ana Acimovic), forming a porno cabaret act that travels from village to village in a Woodstock-esque van. The troupe aren’t all necessarily the type that a lot of people would want to see naked, and some are suffering assorted addictions and afflictions, but they’re willing and available. However, the rural Serbs take to Marko’s shows like the villagers did to Dr. Frankenstein’s experiments, and soon Marko takes a further step downward into depravity: creating snuff films for a German backer in order to alleviate his ever-worsening money problems.

Even after Life and Death abandons the “video diary” gambit, there’s a loose and improvisatory, but not undisciplined, feel to the way Djordjevic films his story and guides his cast, and he has a clear affection for the misfits who populate his movie and the would-be artistic rebel who leads them. The up-front presentation of their assorted carnal pursuits feels of a piece with the writer/director’s general warts-and-all approach, and as bleak and nasty as the story gets, he inserts moments of twisted humor here and there. Sometimes, they exist cheek-by-jowl with his shocking imagery, as when a young man bids an emotional goodbye to his beloved goat—before bloodily killing it.

Djordjevic is deadly serious, though, in his intent to point out the cruelty and atrocities of his country’s recent history. The subjects of Marko and co.’s snuff movies are not victimized innocents, but volunteers who desire to die, and it’s the filmmaker’s blunt point that their grisly on-camera deaths are escapes not necessarily any less unpleasant than the lives they are departing. One snuffee is an ex-soldier haunted by his participation in war crimes; another is a man who believes the money he’ll receive for his sacrifice will help out his granddaughter, who was disfigured by fallout from the conflict. Djordjevic’s message is clear: Whatever carnage a director might stage before his lens pales in comparison to the inhumanities committed by the government and military on a much grander scale.

As such, The Life and Death of a Porno Gang doesn’t carry the catharsis or vicarious thrills of a traditional horror film; even when the splatter goes over the top, the snuff sequences are more sad than anything else. In fact, Life and Death overall doesn’t really qualify as a strict genre movie; it’s more a multicharacter study of artistic aspiration giving way to simple survival instinct under the worst possible circumstances. Not all of it connects emotionally—there are times when Djordjevic lets things go slack in his pursuit of personal observation—but for the most part this is an absorbing experience. And in a time when worldwide cinema is becoming increasingly homogenized, it’s something particularly noteworthy—a movie inextricably tied in with the country and climate where it was made, that couldn’t have been produced anywhere else.