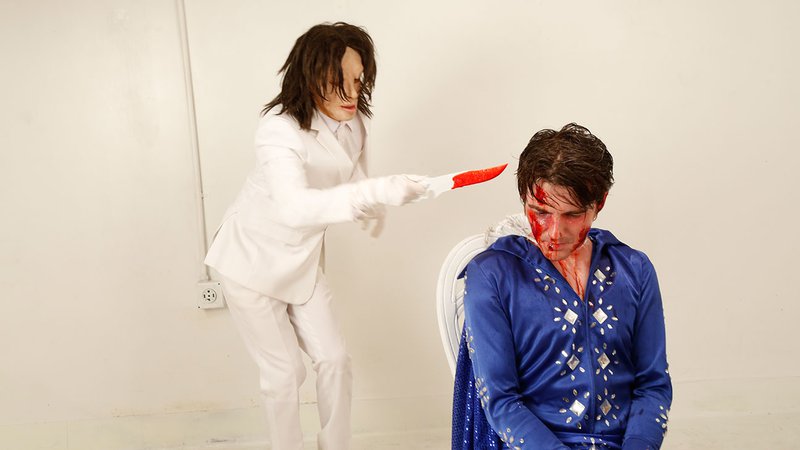 Editor's Note: This was originally published for FANGORIA on June 26, 2015, and we're proud to share it as part of The Gingold Files.

The eponymous murderer of L.A. Slasher is as all-American as they get, stalking Hollywood to bloodily put vapid, fame-greedy reality-TV stars out of our misery. But the man who put him through his paces hails from the northeast of England: writer/director Martin Owen, who speaks to FANGORIA here about his splattery satire.

In L.A. Slasher, the villain, physically portrayed by several performers and voiced by Andy Dick, targets a Socialite (Korrina Rico), an Heiress (Elizabeth Morris), a Teen Mom (Tori Black), a Stripper (Marisa Lauren) and other veiled caricatures of familiar faces from the tacky-TV scene. Making his first American project, and first feature-length movie after helming a few shorts, actor-turned-filmmaker Owen drenches L.A. Slasher in colorful visuals and a soundtrack of vintage tunes that explicitly evoke the 1980s, and befit a story suffused with pop culture—even as the Slasher tears it apart. [Thanks to Madeleine Koestner for her help with this interview.]

How did you first get involved with L.A. Slasher?

A couple of years ago, I was approached by one of the producers through a friend of a friend when he was in the UK, to ask if I wanted to get involved. At the time, it was a very different project; it was much more of a classic horror film, and if I remember rightly, the idea was a found-footage-type thing, and the guy was dressed in a boiler suit with a breathing mask. It was stuff I felt I’d seen a lot before, but I liked the idea of somebody killing reality-TV stars, and I thought the title was cool. So I came on board and rewrote the script completely; the only thing that remained was the name and the essential concept. As we developed it further and further, it became more fun, and the ’80s thing just seems to be something I’m inherently connected to. I’m stuck in time, I think; I just can’t seem to get away from it.

Do you think that as an outsider to the Hollywood milieu, you brought a different perspective to the subject?

Yeah, probably—more outside looking in. I was mindful that I didn’t want to be too disparaging of Los Angeles itself, because it’s somewhere I’ve spent a lot of time, and actually has a place in my heart. It had more to do with a certain cross-section of the society and the culture, and what this underbelly of reality TV and famous-for-being-famous culture is becoming.

How did you go about casting, and was there ever a thought of using actual reality-show stars?

There was; I mean, Brooke Hogan is in the opening scene, and she’s a reality-show star from Hogan Knows Best. But that was really, in terms of using people from those shows, the one and only bit, to kind of set the movie up and say, “This is our mission statement, this is what we’re doing.” For the rest of it, though, I felt that using actual actors was a better idea than using reality stars, because that would kind of cross the line of exploiting what we were accusing other people of exploiting, if that makes sense. If we cast TV stars, the only thing we’d be using them for was their fame, which might have seemed a little hypocritical. Plus, we wanted people who could act [laughs], so it was never really a consideration.

The Slasher himself has kind of a unique look, with his all-white outfit. How did you arrive at that, and what’s the story behind the multiple people playing him?

Again, when I first got involved, it was a very different thing; it was very typical of how you imagine a slasher to look in a slasher movie, and kind of conventional. We wanted to come up with something unconventional, because the slasher becomes, I suppose, almost a Robin Hood-esque figure, an antihero, this sort of angel who descends on Los Angeles, in a tongue-in-cheek way. I’ve been asked this question before, and I’d really like to give a clever and insightful and nuanced answer, but honestly, I just thought it looked cool [laughs]!

As far as the multiple performers, we wanted the Slasher to be almost asexual, in a way, so we came up with the idea of both men and women playing him, so the movements are not, you know, “That’s a guy” or “That’s a girl.” It was more about the Slasher’s personality than the physicality of how he or she moved.

How about getting Andy Dick for the voice?

We were considering lots of people, and the actors we initially looked at were probably too obvious—people you would think right away would have a good voice, or would be someone you’d go to for a voiceover role. But when Andy Dick came around, he seemed like a very interesting choice; the Slasher is slightly different and unusual, and Andy’s voice was perfect for that. He gave the part real character, and I believe his performance really draws you in and makes you think.

Do you hate reality TV as much as his character does?

No, I wouldn’t say I hate it. I do find the culture, in terms of why people want to be on the shows… I think the reasoning is wrong. It’s just because people want to be looked at. I’m the complete opposite; I don’t really use social media, and I’m sort of a private person. I think the whole trend of wanting to be famous for the sake of being famous is fairly vacuous.

Getting back to the ’80s, the movie has a very neo-noir-esque visual scheme, and a lot of the movies that looked and felt that way were shot in Los Angeles during that decade. Would you say L.A. Slasher was influenced by the ’80s in general, or were there more specific things you drew from?

That’s a good question. In terms of the era, as I was saying before, I think I’m stuck there; I don’t think I’ve ever really moved on from that. For the visuals, I believe I was inspired by British New Wave films from the late ’60s and early ’70s, in terms of the jarring cinematography. I quite enjoy stuff like that, that isn’t afraid to take risks. Those are the movies I like to watch, and at the end of the day, I’m kind of selfish, and I want to make movies I want to see [laughs]. If you try to make a movie that you feel is going to appeal to other people, who might have completely different tastes than you, it’s so subjective, and I don’t think it would work, you know? I don’t think I’m such a weirdo, and so far removed, that there aren’t other people who like the same sorts of things as me.

The soundtrack is great; there are a lot of cool, obscure songs in there.

Was it difficult securing the rights to all those songs on such a small budget?

Yes—extremely difficult! We got there in the end, but it was certainly not an easy thing, trying to put so many, if you like, marquee tracks in a movie when we were working with limited money. It was a headache.