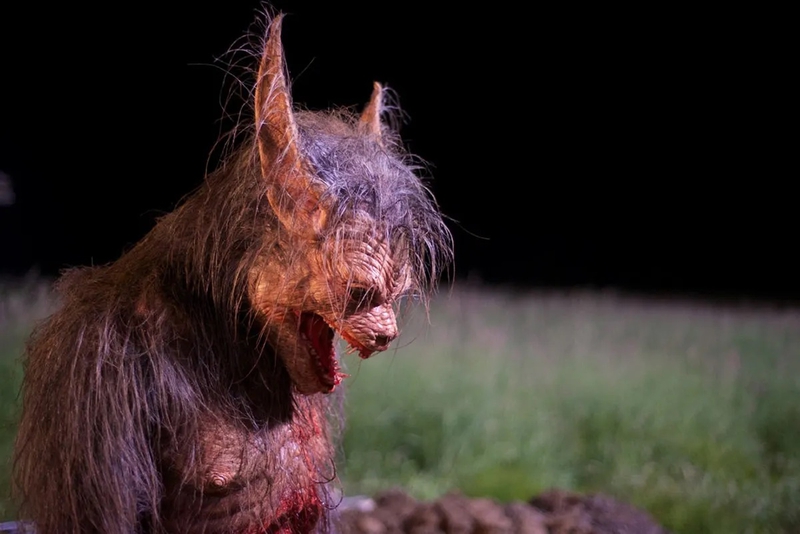 Editor's Note: This was originally published for FANGORIA on November 14, 2014, and we're proud to share it as part of The Gingold Files.

Playing at the Ithaca International Fantastic Film Festival in Ithaca, NY is the werewolf thriller Late Phases—an appropriate choice, give that it’s one of many features shot in upstate New York by producer Larry Fessenden, who discusses the film, its cast and groundbreaking transformation in this exclusive interview.

Late Phases, which is reviewed here and will play theatrically via Dark Sky Films, stars Nick Damici of Stake Land and We Are What We Are as Ambrose McKinley, a blind Army veteran who reluctantly moves into the Crescent Bay retirement community, which has been plagued by vicious “animal attacks.” He soon comes to believe that the culprit is actually a lycanthrope, and prepares to engage the beast in combat. The first English-language film by acclaimed director Adrián García Bogliano and scripted by Eric Stolze, Late Phases found Fessenden teaming on the producing side with his Glass Eye Pix cohort Brent Kunkle, Dark Sky’s Greg Newman and Zak Zeman of the V/H/S movies.

How did this project first come together for you, Bogliano and the other producers?

I got a call from Greg Newman at [Dark Sky parent company] MPI, with whom we at Glass Eye Pix had made five movies together, and he said, “Larry, I’ve got a script I’ve always liked.” I knew about it, because I had known for a year that he wanted to cast Nick Damici in a werewolf film, and I was always very jealous! Greg had had a good experience with Stake Land and working with Nick on that, and Nick was very well-received in England, so Greg had this notion that he’d be a good lead for Late Phases. It’s an older character, but it required a physical presence, and I think Greg has a great fondness for Nick’s kind of Charles Bronson-esque qualities.

So he pitched it to me; he said, “Listen, I want Nick to do it, I want Aaron Crozier to edit”—who’s a comrade of ours; Aaron was the AD on Stake Land. And it was a werewolf film, and I thought it would be cool for Glass Eye to dip into that pond. So I said, “Great,” and gave the script to Brent Kunkle, and Brent liked it and said, “Let’s try to do it.” I’m glad to be working with Greg again, and the other appeal was Zak Zeman, who I know from the V/H/S movies; that combination seemed right.

Now, the final piece of the puzzle was this “up-and-coming” director. Adrián had actually made nine films, but he was just becoming recognized in America. So it was really fun to find out about Adrián’s work and then meet him; he’s such a wonderful, low-key guy. I always say that horror people are the sweetest, but then the images they create are something different!

What particular sensibilities did Bogliano bring to this film that were different from previous movies you’ve produced?

Well, this movie has a very delicate and delightful tone. There’s an element of sardonic camp to it; it takes place in an old folks’ community, so we naturally used actors who had maybe been out of the limelight for a while, and it’s really a delightful cast. As a result, there’s an element of humor in the fact that these old-timers are involved in a werewolf story, and a little bit of tension, too. We have people from The Stepford Wives and Gilligan’s Island [Tina Louise], from The Deer Hunter [Rutanya Alda], really exciting touchstones…Jaws: The Revenge [Lance Guest]—you name it [laughs], we had someone who brought their storied career into our little movie community. So there’s an irony to it, and then, of course, very well-realized werewolf action and a lot of gore. It’s basically a great time, perhaps a little funnier than Adrián’s previous stuff, but always with great affection for the genre, which is the one thing we insist on at Glass Eye: not to make fun of it, but to celebrate it.

How involved were you in the casting of all those great veteran actors?

That was a challenge, because of course, we had Nick in the lead, but my fellow producers wanted some names, and that’s just how it goes now with financing; you try to find some recognizable people. And one thing that’s essential to say is that Adrián is a great, great lover of cinema and knows every conceivable bit player—he can tell you who played the father in The Howling’s brother [laughs]. So he knew lots of wonderful character actors from the canon of horror, and had a lot of lists, and we wanted those lists to make sense to the financiers. We worked with Sig De Miguel, a New York casting agent who has a great energy and can ferret out talent from the New York stage, from old movies, as well as new talent; he’s been a great asset on all of our projects.

So Brent and I and Sig and all the producers went through the rounds. It’s always a tough process—you’re making a genre movie, you don’t have a lot of money—and yet the script was unique enough that we got a great cast. Tom Noonan is in it too, which is sweet; I called Tom and said, “Come join us,” and he’s always game to see what Glass Eye is up to.

Was there ever a point where the financiers said, “Could you get a couple of younger people in the cast, to make it more commercial?”

[Laughs] I love that question! There’s just no way, there was nothing in the script.

Maybe a young attendant in the old folks’ home or something…

No, that’s what I loved, and that’s really why I got involved with this. I loved that Greg wanted to make this movie about old-timers. That’s such a deep theme, and it’s reflected in the title: These are people at the late phase of their lives, and it also refers to the late phases of the moon. It’s a poignant way to tell a werewolf story, and Nick really carries the day. Mind you, Ambrose is also blind, so he’s a blind man fighting werewolves—that’s just what the kids are looking for [laughs]! But that’s what’s going to make this forever a remarkable movie, and that’s what we’re about. We’ll let the teens go into the Hollywood pictures. Also, Ethan Embry is in the movie; he’s not exactly a youngster, but he brings a little youth to the project. He plays Nick’s son, and he’s also a really cool performer, and it was good to have him on board.

How was Robert Kurtzman chosen to create the werewolves?

Well, honestly, that was my idea, because I had met Beki Ingram from Bob’s shop on Jug Face, Chad Kinkle and Andrew van den Houten’s film that I acted in. I really liked her and was aware of Bob’s studio, and of course Bob’s reputation precedes him. I knew they did a lot of creatures out there in Ohio, and I liked the idea of getting as local as we could to New York. Our regular [makeup FX] comrade Brian Spears wasn’t as into the idea of doing the werewolves themselves; we obviously brought him on to do the gore, and there’s plenty of it, and the age makeup. So I sent Brent over to Bob Kurtzman’s shop, and they responded immediately, because I think Bob has a soft spot for werewolves, and he pitched some designs to Adrián. It was a great process, everyone working together to make these really unusual-looking monsters, and also to do the transformation in a new way.

That scene, all done in one long moving shot with a motion-control camera, is pretty impressive. Can you talk a bit about that?

We shot that in a studio in Kingston, New York, an amazing place to find upstate—the ceilings were enormous, it was fully functional. We had a day with the motion-control camera, and we realized that this would be a perfect place to do it. That was one of Adrián’s first concepts, I believe, when he took on the idea of doing a werewolf film. He liked the script and the setting, and I think he wanted, as any director would, to take a unique approach to the transformation scene. So he conceived of a single shot gliding back and forth between two characters, one transforming and the other observing. In the old days, you could hide your pans from one character to the other with soft edits and so on, but we really wanted to lock it in and have as much control as possible. Adrián had conceived of this beautiful single-take shot, so we used the motion-control rig to repeat the exact camera move over and over, and then we stepped in and did different pieces of the transformation. It was quite an elaborate process, but the final effect is seamless.

You’ve talked in the past about your ambitions to make your own werewolf movie; has your involvement in Late Phases fulfilled those ambitions to an extent?

Well, I have a completely different approach; it would probably be familiar to people who know my sensibilities. It’s a very naturalistic what-if-you-were-a-werewolf? kind of story, the way I approached a vampire story with Habit. It’s nice, because it’s not really what the mainstream or even this kind of movie defaults to. So I have a little wiggle room if I ever get my own project off the ground. I’ll say the same thing I say in every interview, which is that the beauty of the horror genre is that there are so many approaches, even to the same themes. If you want to make a vampire story or a werewolf story or a creature-in-the-water story, you have opportunities to be unique, even while you play with familiar tropes.