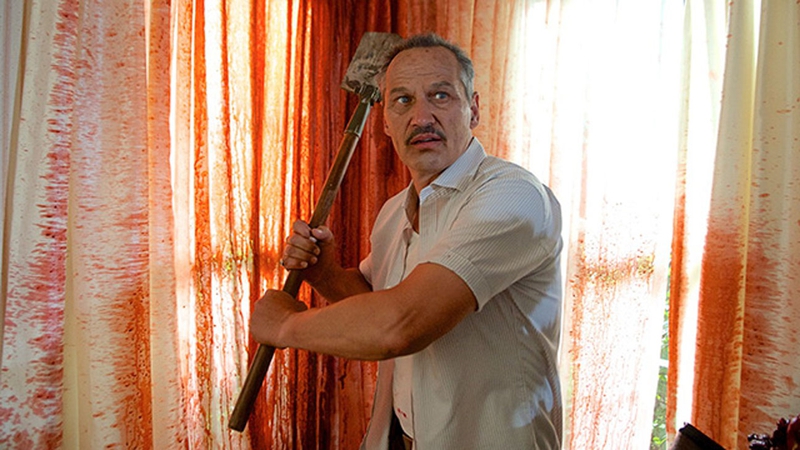 Editor's Note: This was originally published for FANGORIA on October 31, 2014, and we're proud to share it as part of The Gingold Files.

Late Phases is a bit of an oddity—a werewolf movie in which the werewolves aren’t the highlight. Rather, it’s a showcase for actor Nick Damici that cements him as one of the current genre scene’s most interesting actors.

Having already made a strong impression heading up the ensembles of Jim Mickle’s Stake Land and Mulberry Street, Damici has his first true lead in Late Phases. He plays blind Vietnam veteran Ambrose McKinley, and when we first meet Ambrose, he has just lost his wife and is none-too-happily moving into a retirement community called Crescent Bay. He’s clearly able to take care of himself, and believes that places like this are where people go to die and not to live—but has no idea how violent death can be around these parts. The area has recently been beset by a series of “animal attacks,” and Ambrose has barely settled in before something big, hairy and vicious savagely kills his next-door neighbor.

Thus, director Adrián García Bogliano and screenwriter Eric Stolze lay their horrific cards on the table right away; we know there’s a werewolf on the loose (and get a pretty good look at it), and Ambrose figures this out fairly quickly too. Since Stolze subscribes to the traditional full moon rule, that means it’ll be another month before our hero will be able to confront his transformed nemesis (since we know he’s not going to solve the problem until the villain wolfs out again). Thus, what might be down time in many another movie becomes the meat of Late Phases, in which we get to know Ambrose and watch him deal with the regular challenges of his life as well as the horrific situation he has been dropped into.

That might make audiences in the mood for a typical monsterfest fidgety, but fans of Damici (raises hand) and anyone who appreciates a more character-oriented horror tale with find much to appreciate here. Although younger than his role (and aged with subtly effective makeup by Brian Spears), Damici is perfectly cast as Ambrose, who doesn’t suffer fools or pretty much anyone else gladly, and brings an underlying decency and humanity to the role that makes it easy to enjoy Ambrose’s irascible interactions with his fellow Crescent Bay residents. He gets along better with the local priest, Father Roger (Tom Noonan), with whom he’s able to share some heart-to-hearts about sacrifice, aging and his place in the world; the two actors are well-paired, to the point where you’d like to see them teamed up again in another movie.

Of course, because he’s played by Noonan, Father Roger also becomes a viewer suspect as the werewolf’s alter ego, and as Ambrose prepares for his impending confrontation, Late Phases teases us as to who the hidden monster might be. It eventually becomes easy to narrow down, but there’s a further twist to the scenario that results in a final reel full of hairy, full-blooded action. The big transformation is done as a very impressive, long, single take, put together via motion-control camerawork and digital editing but showcasing good old-fashioned practical FX by Robert Kurtzman. It’s always fun to see a traditional man-in-suit lycanthrope (bearing a few design echoes of the gargoyle Kurtzman created with his former KNB partners for Tales from the Darkside: The Movie) running amok, and Bogliano is clearly reveling in staging monster mayhem for the first time.

Previously noted for such smaller-scale, sometimes surreal South American and Mexican features as Cold Sweat, Penumbra and Here Comes the Devil, Bogliano is literally out of his element on his first English-language feature, but adapts easily to the different language and environment. The atypical-for-the-genre emphasis on elderly and middle-aged characters allows the filmmakers to stock the cast with a pleasing array of veterans; in addition to Noonan, they include Halloween II’s Lance Guest, Amityville II’s Rutanya Alda, He Knows You’re Alone’s Caitlin O’Heaney and, perhaps most surprising, Tina Louise—Gilligan’s Island’s Ginger herself. Representing the younger generation, Cheap Thrills’ Ethan Embry has some nice moments with Damici as Ambrose’s son. For all the strong support, though, this is Damici’s show, and he makes the most of it, holding the screen whether Ambrose is in pitched battle with a lupine beast, or sitting curbside as a bus—and life—pass him by.