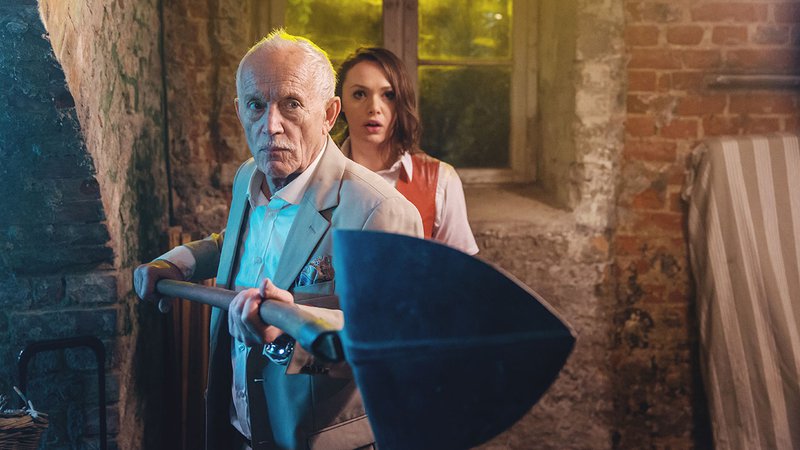 Editor's Note: This was originally published for FANGORIA on July 2, 2015, and we're proud to share it as part of The Gingold Files.

Veteran actor Lance Henriksen has worked opposite some of the best physical creature FX in the business, including Stan Winston’s creations for Aliens and Pumpkinhead. Now he confronts giant wasps, done in large part live on set, in Stung, which he discusses in this exclusive FANGORIA interview.

Stung, directed by Benni Diez and written by Adam Aresty, is set at a remote mansion, where the guests at an upper-class garden party include Henriksen’s Mayor Caruthers, seeking support for his re-election. When the bash is invaded by mutated, oversized wasps, Caruthers joins caterers Julia (Jessica Cook) and Paul (Matt O’Leary) and the hostess’ weird son Sydney (Clifton Collins Jr.) in a struggle to survive and destroy the big bugs (see our review here). “I’m really happy about promoting Stung,” Henriksen says. “I saw it a week ago, and I really liked making the movie, but when I saw what they did with it, I was really blown away. It’s a very, very entertaining movie.”

One of the cool things about Stung is its use of practical monsters in many scenes. Was that part of the fun of making the film?

Yeah, sure. When you get a bunch of actors conspiring to be afraid of a puppet, and then blood’s being squirted on you and all that kind of stuff, it becomes like theater. It’s great, man; it’s a lot of fun to watch each other’s reactions. When you go out on stage and you have to laugh, out of nowhere, with a couple of other people on the stage with you—when you watch them try to laugh, that will make you laugh. And I had a lot of laughs watching this one. I brought a lot of people with me, and they loved it.

There’s an audience now that prefers old-fashioned physical FX of the type used in Stung, as opposed to digital FX.

Yeah, and you know, a lot of CGI is producer-oriented; in other words, they’re like, “Let’s make it bigger, better, longer, more explosive—more, more, more!” There’s got to be a happy medium between real effects and the CGI, and I think that’s starting to happen.

How did you get involved with the film?

They sent me the script and a sizzle reel [see below]; it was just one scene, but it was well-shot. I read the script and thought, “This is going to be fun to do.” And when I met Benni, he was full of great humor and taste, and the producer was too. They had all gone to the same film school, and they were all on that set working together. It was great.

I imagine you get offered films like this all the time; what was it about this particular script that stood out for you?

Well, to be honest, it doesn’t take much to get my motor going. I mean, when I read a script, and I see the situations in it… We actually had a reading in LA before we went to Germany to film Stung, and what blew my mind was that we all got along instantaneously. We were sitting around a table reading this thing, and it came alive just on that level.

You and Clifton Collins Jr. both seem to have had a lot of fun with your roles. Did you contribute any of Mayor Caruthers’ dialogue?

Sure, sure—as much as I could! There was one I especially wanted, and it’s where this kid is telling me about his position in life, and I say to him, “You know what? I knew I was not gonna get re-elected, but now that this happened, I think they’ll have a lot to talk about!”

Was shooting on Stung’s German set any different from working with an American crew?

Oh yes, it was a very different. These were all young guys out of film school, and we were outside of Berlin at this incredible mansion—you saw the house. And we were all pitching in. It wasn’t like a Hollywood set; it wasn’t like, “Your trailer’s over there, parked behind that other big trailer”—none of that crap. We all had our own little rooms in that mansion. It was all good, we all got along and everybody just wanted to make a good movie.

I’m assuming some of the film was shot on sets, since parts of the mansion are destroyed in the course of the story…

No, all of it was shot at the mansion. It was being refurbished at the time; it’s a very old building.

What were the most fun scenes to shoot?

Oh God, that’s really hard, man. I liked the party; the first line out of my mouth is, “This party needs an autopsy!” [Laughs] It’s so dull, a bunch of old people sitting around, and all I can think is, “I’m not gonna get enough money out of this to do any advertising for my re-election; I might as well get drunk!”

Was there anything about Stung that surprised you when you first saw it, that you weren’t expecting when you were making it?

All of it—the rhythm, the build, the relentless nature of it, the whole look. It looks like it cost $30-40-million; it’s a beautiful film. I don’t know what exactly the budget was, but it’s not important; the whole industry is not about, “Look what you did for so little.” It’s like, “Look, I made dinner for 10, but I didn’t invent any of this food. It’s just a great dinner, enjoy it!”

Do you have any plans to make more movies with the Stung team?

Yeah, if they come up with a project that they’re interested in me for, sure. I have a lot of films lined up for this year already, though. Not only that, but I’m going to be doing a couple of episodes of [AMC’s new martial-arts series] Into the Badlands over in New Orleans.

I wanted to briefly jump back to another film you did involving flying creatures: Do you have any specific memories of making Piranha II with James Cameron?

Oh, you’re so bad, going back that far! [Laughs] That’s the worst movie I’ve ever done; we don’t have to talk about that. It’s like picking a scab!

Well, I was just wondering if there was any point on that film when you recognized that Cameron had the chops to make a much better movie under different circumstances.

Oh yeah, definitely. But there are no better circumstances; they are all circumstances, believe me, man. I’m not getting philosophical here, but the minute you walk on a set, you’re in a new environment, and that’s it. You’re gonna have the adventure, if you’re open to it.