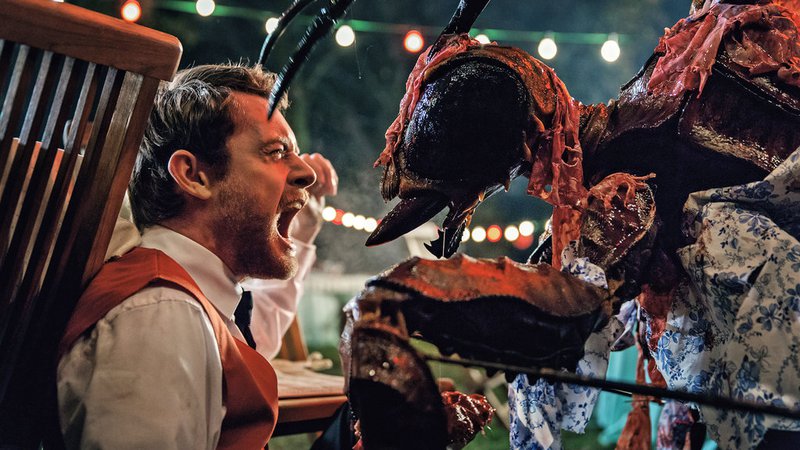 Editor's Note: This was originally published for FANGORIA on April 19, 2015, and we're proud to share it as part of The Gingold Files.

Stung is an agreeably cheesy nature-gone-mad movie that wins points for embracing a late-1980s vibe. Granted, as such it’s more Blue Monkey than Night of the Creeps, but that spirit carries it over a number of rough spots.

Chief among the nostalgic attributes of Stung is the heavy use of good ol’-fashioned physical creature and gore FX, overseen by Martin Schaper. There is a decent amount of CGI, some of it rather well-wrought, when the oversized-wasp villains take flight, but quite a bit of the critters and the carnage they cause is done with animatronics, genuine spurting red stuff and gallons of sticky methylcellulose. Points also to DP Stephan Burchardt; as opposed to the anonymous digital slickness of the cinematography in many current B-pictures, he captures the density, varied colors and shafts of light seen back when this kind of film was actually shot on film.

The plot: Julia (Jessica Cook) has just taken over a catering business from her late father and is headed to her first job with new partner/bartender Paul (Matt O’Leary, also soon to be seen in the superior time-bending sci-fier Time Lapse). He’s a slacker goofball who doesn’t take much seriously except oogling his attractive new boss, and Julia thinks her biggest problem will be keeping him in line during a garden party in a remote part of Germany-posing-as-the-U.S. But boy, is she wrong: The local wasp population has started turning especially feisty, growing to abnormal but not quite monstrous size…at least at first. Then they begin attacking the guests, plunging stingers into bodies and eyeballs, infecting some victims who serve as hosts to person-sized bugs that quickly burst from within them, and sometimes continue to carry the leftover human heads on their appendages (a nice, icky touch).

The surviving ensemble is soon whittled down to just Julia, Paul and a couple of others, but they’re the right others. Dependable character actor Clifton Collins Jr. is clearly enjoying going all weird as the party hostess’ eccentric son Sydney, while Lance Henriksen has more deadpan fun as Mayor Caruthers. Once the action pauses and this quartet takes center stage, the film settles into a pokey midsection as they all talk to each other and stuff, and an explanation for the mutations is revealed (and given no more time or weight than it deserves).

Under all this pressure, of course, Paul will learn to stop being such a jerkwad and man up, and of course, Julia will get to go all Sigourney Weaver on the mega-wasps. There are, in fact, few surprises to be found anywhere in Stung, and logic, even on the movie’s own terms, sometimes gets cast aside. Still, credit director Benni Diez and writer Adam Aresty for resisting any temptation to go campy or wink at the audience (the stray background in-joke aside). They’re committed to their scenario, and to upping the ante (or waspy) with each succeeding setpiece as the movie buzzes and bleeds toward its conclusion.

These developments are ridiculous as often as they’re clever, the action is sometimes overedited and the film is never truly scary. Yet Stung has a certain low-budget, straight-faced, splattery integrity that those who appreciate those creature features of yore will likely find themselves responding to. In fact, I’d wager that certain genre fans who might put down Stung would embrace the exact same film if it had been made a few decades ago.