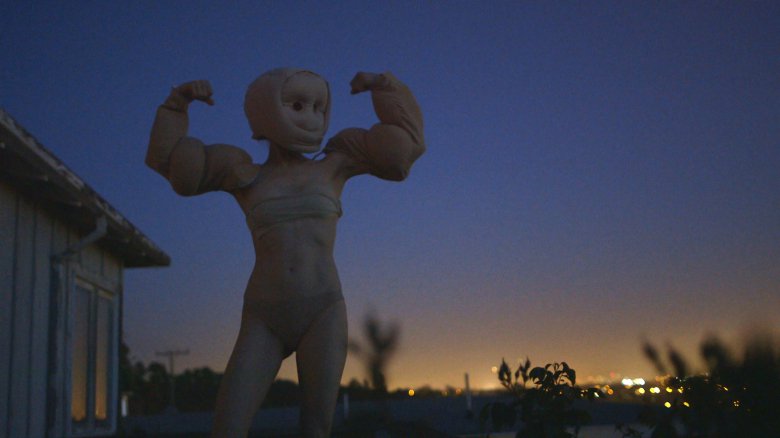 Editor's Note: This was originally published for FANGORIA on June 25, 2015, and we're proud to share it as part of The Gingold Files.

There has never been a female genre-film protagonist quite like Amy, the young woman at the center of Jason Banker’s new psychodrama Felt. Banker and star Amy Everson based that character on the latter’s own life and experiences, and both delve into the process in this interview.

In Felt, Everson’s Amy deals with both past sexual trauma and present male-aggressive culture through bizarre art pieces she creates—most notably male and female “skin suits” sporting plastic genitalia. Donning these outfits empowers her, but also causes her to lose touch with reality—which threatens a burgeoning relationship she develops with an apparently nice guy named Kenny (The Sacrament’s Kentucker Audley). A rethinking of rape-revenge tropes in which the damage and horror are largely internal, Felt is Banker’s unsettling follow-up to Toad Road (the portrait of rural unease that marked his feature directorial debut after numerous credits as cinematographer) and introduces a unique new on-camera talent in Everson.

How did you adapt Amy’s real-life persona into her onscreen character, and develop her together over the course of making Felt?

JASON BANKER: Well, one of the reasons I enjoy making films this way is because I like to really dig into somebody’s psyche, and Amy is such an interesting person. I come from a documentary background, and as much as you try to get everything about a person into a film, it’s just not possible, so you have to decide what elements you’re going to use, and that process can be really fun.

AMY EVERSON: The story and character developed naturally from Banker approaching the project with an open mind and a camera and saying, “What is this about?” He followed me and captured me in my natural state, and we also improvised and explored some of my present and past and costumes and art. It was an ongoing process, even after production, of figuring out what it all meant, and what the story was. It was an organic blend of reality and fiction and documentary and narrative.

BANKER: Also, because this is for FANGORIA, the idea was to explore the darker elements of her psyche. That was really interesting, figuring out how to make a movie with the dark tone I want to see in the films I make. There was a lot of discussion about how, while this was based on Amy’s life, we were also making something much grimmer than that life, so developing that was an interesting part of the process.

Amy, your character goes to some pretty unsettling and even perverse places. How much of that did you draw from your own feelings and experiences, and how much did you come up with specifically for the movie?

EVERSON: A lot of it was just an exploration of a part of myself. It is very much based on my real personality and experiences and sense of humor, and then running with that at an extreme level.

BANKER: In terms of building the horror narrative, Amy’s art was one of the things I really focused on. Her skin suits were kind of inspired by The Silence of the Lambs’ Buffalo Bill, right, Amy?

BANKER: That was an interesting thing to me; it was like, “Wow, these are skin suits! Let’s explore this a little bit more.”

EVERSON: The male suit with the penis was born out of a costume I made for a villain party that was inspired by Buffalo Bill. The idea was, what would be the reverse of that? Because Buffalo Bill kills women and literally inhabits their bodies, he is the ultimate villain, and I thought, well, a naked man can also be very threatening and villainous as well. I was exploring how that has affected me all my life, and how my life experiences have informed my costumes and my art.

The movie has a very strong overall theme of male victimization of women. Was that something you wanted to explore from the beginning?

BANKER: Well, when I met Amy and saw the suits, the very quick reaction was, it would be great to make a female-based horror film where a girl goes after men. I wasn’t stuck on that idea, because I knew it was a little bit cheesy and clichéd, but then I thought of the idea of exploring a horror film centered on the visual of a girl taking on a male identity, and doing it in a very artful way. That really opened up my mind to the possibilities, and from there, we developed something that also was sensitive to Amy’s real experiences, and that was manageable on a very low budget.

EVERSON: While I was happy to be a villain, I wanted to make it clear that I’m not just a crazy person; if I was going to be a bad person, we needed to contextualize what made me that way. I wanted to address my personal experiences, and what would lead me to act out aggressively.

As far as the male characters were concerned, how were they cast, and Amy, how was it relating on camera to people who were actors, yet inspired by people you’d known in real life?

BANKER: Well, Brendan Miller, who is in the roofie scene, is an actor I had worked with on another film I didn’t direct—I just shot 2nd camera—and I had known him for a while. This film was made for very little money, so Amy and I just called on people who were within our reach. The idea at the very beginning, which Amy and I both wanted, was to go out into the world and catch behaviors of people who didn’t even realize they were being, say, misogynistic. The scene at the beginning with all the guys in the hotel room is an example of that.

EVERSON: A lot of the cast were just random people we caught and pulled into the project, and a lot of them brought their own interpretations of what they thought would incite an interesting scene. Many of the scenes were not planned, but were just based on the characters they brought. They’re not necessarily re-enactments of specific moments from my life, but they are relatable interactions, like these guys talking shit or being jerks. Banker would shoot hours of footage of us just interacting, and then we would look at, OK, there’s a pattern of aggression here or there. They’re not necessarily reflections of these specific people; it’s a blend of improvisation and the real ways people talk. Kentucker is an actor Banker brought in to play a character who represents a person from my life, and there are scenes between us that are re-enacted, but a lot of it was just improvised with the energy I had with Kentucker.

BANKER: I think that sometimes, guys don’t understand how they’re behaving; they’re almost preprogrammed in their own way, being overly aggressive or saying things that are not sensitive, and I believe we caught a lot of that. At the same time, we needed certain things to be very clear, so we brought in actors to do certain things that were a little more over the line than they’d get in real life.

Amy, were all the skin suits and other art we see in the movie objects you had previously created?

EVERSON: A lot of it was already made, and that’s what initially provoked Banker to make the film, but other things were created during production. For example, I had the female suit and the male suit, but I also made another full-body skin suit during production, and I created some of the masks while we were exploring the story. And then, needle felting was something I picked up while we were working on the film; I had never done it before, but I thought it was a medium that could inform the story.

How about the specific objects addressed in the film, like the fetal Hitler?

EVERSON: [Laughs] Yeah, the fetal Hitler was made once we had already started shooting, but it was not necessarily made for the film. It was just like, I got into felting and was making a bunch of random things, and that was just another object in my room to show on screen.

EVERSON: It was after; it was actually fairly recently.

How long did the entire Felt process take, from the initial inspiration through the shoot and completion?

BANKER: We were debating that this morning; I was going back through my e-mails. From my first e-mail to Amy until I had the film together, I’d say it was a year and a half. The actual shoot was a year, or slightly less. She lives in San Francisco and I live in New York, so we didn’t film as much as we would have liked to. I could only shoot with her when I’d go to the West Coast for work, and I would make my way down to shoot with her for a couple of days, and then I’d leave, and then a couple of months would go by and I would go back again. It wasn’t a continuous thing; we were just doing it when we could.

How did you two first meet up?

BANKER: I was on a shoot in San Francisco and went out with a buddy to a club, and Amy was there. She was dancing, and I think she was doing a lot of Michael Jackson moves, and you just had to look at her because she was being so entertaining and kind of…provocative; that’s the way I would describe it. She came over and started talking to us, and we ended up shooting a short video with her wearing the naked woman costume she made. If you go to Vimeo and type in “White Rain Suffocation,” it’s an unofficial music video for this song we like.

That predates the film, and I just knew I had to make a feature with her at some point, but it wasn’t until a year after we shot that video that I asked her if she wanted to do it. She’s a natural performer; she has that thing where you put a camera on her, and magic happens. That’s a tough thing to find even in actors who spend a lot of time trying to get that; she just has it naturally. I hope somebody hires her to do other kinds of roles, because it would be very interesting to see what else she can do.

Do either of you think you might do a more traditional horror film in the future, either together or separately?

BANKER: I love horror films and I love sci-fi, but it’s weird, because on one hand I love realism, and the documentary style of shooting is very natural and instinctual for me. And then on the other hand, I love things that are completely out of left field and have no basis in reality, like over-the-top science fiction or things with heavy fantasy elements. I enjoy trying to marry the two together, but in the future, maybe even in the next film I do, it will be a little bit more… It’s not going to be traditional, but it may have a little bit more of the horror elements.

EVERSON: I’m definitely open to doing more movies, whether it’s acting or any other aspect. If it’s a project I believe in, horror is a genre I would be happy to jump into.