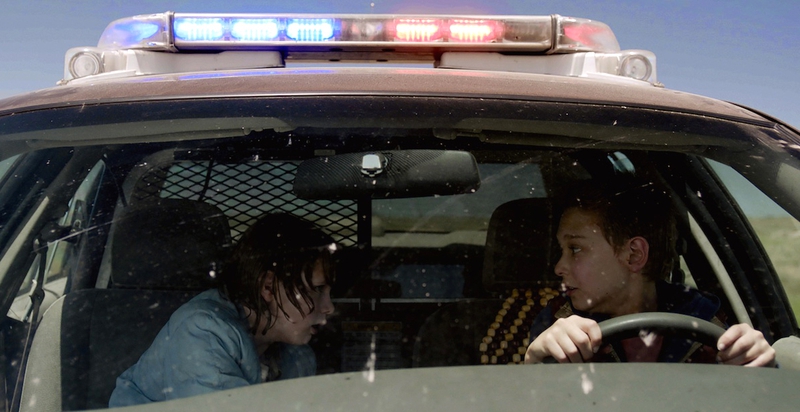 Editor's Note: This was originally published for FANGORIA on August 6, 2015, and we're proud to share it as part of The Gingold Files.

After causing a sensation at festivals from Sundance to Fantasia, the rural thriller Cop Car is driving into theaters from Focus World. The film (reviewed here) has been a calling card for its director/co-writer Jon Watts, who spoke to Fango about it at Fantasia.

Cop Car stars Kevin Bacon as corrupt small-town Sheriff Kretzer, who makes the mistake of leaving his cruiser unlocked with the keys inside in the middle of the woods while he attends to some illegal business. Two preteen friends (James Freedson-Jackson and Hays Wellford) discover the vehicle and decide to take it on a joyride, setting Kretzer off in deadly pursuit of them. Scripted by Watts and Christopher D. Ford, Cop Car is a taut, quietly relentless experience—and it won the director the gig helming the next Spider-Man reboot. He previously helmed the Eli Roth-produced horror film Clown, which is currently languishing on the Weinstein Brothers’ shelf, marking children in danger as an early if unintentional running concern in his filmography.

The two boys facing constant peril is the riskiest element of Cop Car; how did you deal with that in terms of both the scriptwriting and filmmaking?

I didn’t think about it [laughs]. When we were writing the movie, we were just following the logic of what would happen in that situation, and the more we stuck to it, the more dangerous it got for the kids, so we just thought, “Why not go all the way and see what happens?” We were just trying to imagine what it would be like if you were 10, and you found all that stuff in a car. That was a great moment, when we looked up all the items that are in a police car; they’re all so dangerous!

Is any of the movie based on your own childhood experiences?

Yeah, it’s based on a recurring dream I’ve had since I was a little kid. The movie was shot right where I grew up; we basically walked through those same fields when I was 10. And I always had this dream where I’m that age, in the passenger seat of my mom’s car, and my friend Travis, who’s also 10, is driving around our town, trying to pass people, who recognize us but aren’t stopping. He keeps going faster and faster and I’m getting more and more nervous that something bad is going to happen, and then I wake up. I thought there was something evocative about that situation and that feeling, and I toyed with the idea that maybe it was a police car. Then I pitched it to Chris, and he was like, “Well, whose car is it?” At that point, we realized we had a story, and we sat down and worked it out.

Did you know from the beginning where the story was leading, or did it evolve as you wrote it?

How did you wind up casting Kevin Bacon as your corrupt lawman?

Well, when we wrote it, we never thought anyone would actually make it. It was almost like we were writing it as a break from real projects we were being paid to write, and we were surprised that people liked it. And then, my fiancée is a manager who works at David Schiff’s company, and David Schiff represents Kevin. So she read the script—and she didn’t like Clown, so she wasn’t just doing that because, you know, we’re engaged [laughs]; she’s a critic too—and said, “Kevin would be great for this.” I was like, “We can’t get Kevin Bacon, you’re crazy!” But he read it and really liked it, and he had a little window after finishing up The Following and before going on a Bacon Brothers tour, and told us, “If you guys can get it together in this tiny amount of time, I’ll do it.” I was shocked!

How did you work with him to create this character, who had to be conveyed through very little dialogue?

Yeah, there was none of that in the script. That screenplay was the leanest thing ever; just the action, no backstory, no descriptions of the characters, nothing. So it was sort of up to him; I mean, we talked a lot about who this guy is and where he comes from, and how he may or may not have gotten into this situation. From that point on, Kevin ran with it and built this whole character. He would send me mockups of the kind of mustache he thought Kretzer might have; he had Photoshopped a still of himself from another movie with a haircut he liked and a mustache he was thinking of. It was amazing. And when he showed up on set, he was this fully formed character—he knew every side of it.

How difficult was it finding two young actors who not only fit their parts individually, but had the right chemistry as friends?

We did a nationwide search, looked at tapes of a lot of kids and then held callbacks to see some of them in person. There was this very specific thing I was looking for that I couldn’t quite articulate, but I knew I would recognize it when I saw it. I guess it boiled down to something like, they had to be kids who could be really serious about a situation, you know? So that they’re not acting; you had to feel like they’re really thinking about what’s going on, and I got that from both James and Hays. But I never saw them together. I never even saw Hays in person, actually; we just did a Skype, because he was unavailable to come to the callback. I sort of had to take the plunge.

I didn’t pick them for each role, either; I was just like, “These two kids feel right,” and they had this focused seriousness I could believe in. So we flew them out to Colorado like three days before we shot the movie, and then I had them read each role and then swap, and it was totally obvious who was who. And they became friends in real life, which was great; a lot of what you see on screen is their actual friendship developing.

How did you pull off all the scenes where they’re driving the cop car?

It’s a secret! They’re really driving [laughs]! I would tell you, but it’s a trick that is so not hi-tech or slick that explaining it would take all the magic away. They were actually steering the car and all that; it was totally safe the way we did it, but very low-tech.

How about the moments where they’re playing with the guns and other dangerous equipment? Those must have been very tricky to deal with.

You know, they weren’t. I mean, they had to go through the lecture, and they were never playing with them; it was like, they were handed it, did the scene and handed it back. I underestimated just how extreme people’s reactions would be to those images. People really flip out in the theater; they just squirm and can’t watch.

The cuss words were much more contentious than anything with the guns or the violence. They were like, “Do we really have to say these words?” as if they were going to somehow get in trouble. “No, it’s OK, your characters are saying them,” and their parents were like, “It’s fine, we understand.”

You would think the kids might be thrilled to be able to talk like that—“Yeah! I get to swear!”

Well, it’s like a Pandora’s box once you open that up. Neither one of them had ever cussed that much, I don’t think, in their lives, so they were like, “Are you sure?”

How about the scenes where gunplay erupts around them? Were they present for that stuff?

No one was there at the same time, because of everyone’s weird schedule. We would shoot the Kevin piece, and then we would shoot the parts with the other actors; very rarely were they all on set at the same time. Then we’d shoot the kids reacting, like, a week later. I had storyboarded the whole thing very specifically, so we knew how it all fit together, and it was just a matter of going through and getting the shots.

One thing that makes the scenes where they’re playing with the guns so effective is that there’s no portentous music or suggestive camera angles; it’s presented matter-of-factly.

Yeah, every decision was based on the idea that we would execute it as simply as possible—nothing unnecessary. That was just the tone and the aesthetic of the movie, to keep it lean and not try to tell people how to feel. Just sort of let it happen and show it.

How was the experience of coming back to your hometown to shoot the film?

It was great! My whole family helped out; my oldest sister is a nurse and was my on-set medic, my other sister is a teacher, so she was our tutor for the kids, and my brother’s a firefighter, so he got our fire permits and also did some location scouting. It was a total family affair; it was a lot of fun.

How did the local cops react to the project?

They loved it! No one’s really shot a movie in Fountain, Colorado ever, I don’t think, so once they realized what was going on, they were totally into it. They shut the road down and let us do whatever we wanted. In fact, the motorcycle officer who pulls Kevin Bacon over is a real cop; he was one of those guys.

And they didn’t mind that you were showing their profession in a bad light?

Well, I didn’t realize it, but there had recently been a scandal with a sheriff in a local county around there. So when we first showed up and were asking permission, they were like, “Is this about that guy?” We didn’t know about it; we were like, “No, no, no, we’re totally making it up!”