Q&A: Actress Essie Davis Holds Her Own Against THE BABADOOK 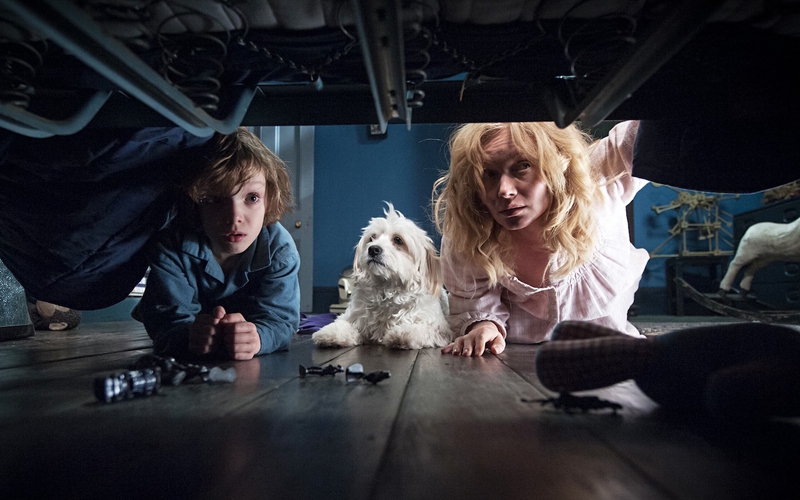 Editor's Note: This was originally published for FANGORIA on December 1, 2014, and we're proud to share it as part of The Gingold Files.

Jennifer Kent’s standout chiller The Babadook had a strong opening in its first weekend, and just as powerful is the performance at its center—that of actress Essie Davis.

In the Australian-lensed The Babadook, released by IFC Films (see review here), Davis plays Amelia, a single mother who has more than the usual discipline problems with her young son Samuel (Noah Wiseman). With no father figure, he has decided he must protect his mom from the “monsters” that threaten them—to the point of putting together homemade weapons that get him in trouble at school. Then a real creature shows up: Mister Babadook, a shadowy phantom that emerges from the pages of a sinister book that mysteriously appears in their house. Davis’ portrayal of a woman losing her hold on sanity and love for her child is as gripping an acting turn as has been seen in a horror film in years, and FANGORIA was privileged to have the chance to query her about her role.

Yes, Jennifer was a year above me at NIDA, the National Institute of Dramatic Art. She was a great actress whom I admired very much, and we became very good friends during that time and for many years afterward. There was another project she was writing for me for about 10 years, but it never got off the ground. Then she wrote The Babadook, and when I read it, I was kind of terrified, and felt confronted by it and kind of unsure whether I wanted to play this woman [laughs]. But I’m glad I did, because it was a fantastic role, and a crazy journey to take; it was a real sort of mountain climb. Because I knew Jen so well, it was a rich and rewarding process as well, because I trust her instincts, and I didn’t feel like I had to fight for my point of view.

Kent had previously explored The Babadook’s ideas in the short film Monster; were you involved with that in any way?

No, I wasn’t a part of that at all. And that’s really more of a scene; it’s not a full story.

Did you look at the short to help orient yourself toward Kent’s vision for the feature?

The feature is quite separate from the short; I did see Monster millions of years ago when it was in the Sydney Film Festival, but it was not on my agenda when I read the script and when we were making the film. The Babadook is just bigger and crazier; it’s something completely different.

What did you bring to the table in terms of Amelia’s character? Did you contribute anything to the screenplay?

The script was complete; I guess what I did was bring Amelia to life, and I came up with notes for the character, but everything she said was on the page. We spent a lot of time in rehearsals, Noah and I, working together and playing together, and Jen and I did a lot of preparation. In the script, there was a physical description of Amelia’s character as she goes through her change, and we did a lot of physical work, and looked at a bit of butoh dance and physical expressions of rage and anger. All of that work in rehearsals really fed into the filming process.

Are you a parent yourself, and if so, how did that impact on your portrayal of Amelia?

Yes, I am, and that’s why it was quite a confronting role to play, because I think lots of parents will recognize themselves there in some small way. We all say terrible things to our children at some stage or other. I believe so many women probably think they’re terrible mothers at some point, and I’m sure lots of men think they’re terrible fathers, or regret what comes out of their mouths or out of their arms. Amelia is a very specific, particular woman, but I believe there will be a lot of people who will recognize themselves and/or their parents, and/or may never have had that kind of mother-and-child relationship with issues of repressed darkness. I believe many people have to live with some very dark part of themselves, one that a lot of other people can’t comprehend. I think The Babadook will touch a lot of people.

It does venture into areas that most horror films don’t explore; are you a horror fan yourself, and do you see The Babadook as different from typical genre movies?

It’s definitely different from current trends. I’m not a big horror fan, I’m a great-movie fan, and I do feel some of the greatest movies happen to fall into the genre of horror, like The Shining and Rosemary’s Baby.

Can you talk about your working relationship with young actor Noah Wiseman?

Beautiful Noah! Noah never read the script; Jennifer told him the story of the Babadook, and that ultimately it’s a story about the power of love, and how Samuel is this incredibly brave warrior who defends his mother. We tried to shoot in sequence as much as possible, and Noah and I played a lot together beforehand. His mum was just amazing; she was with us the whole time. He was 6, and it’s always challenging working with a 6-year-old, just in terms of keeping his attention and all the stuff that working with children entails, but he was so beautiful and present.

A lot of the language was changed when I was talking to him; I didn’t necessarily say the awful things that you see me say on camera. I would do all the scenes with him, and then he would leave, and I would do them all again with a stand-in actor on his knees [laughs]. Noah was very protected and nurtured; there were still scenes we did together that were big and tough, but it was always dealt with like, we were having a play and it was a fun thing, and we had a big hug at the end of it. It was done with love and fun and kindness, and it was a beautiful process, I have to say.

How much of the Babadook itself was on set while you were filming?

Everything was in camera; almost all of the effects were done live. We were very lucky that they were able to build the interior of the house in the studio in South Australia, so we had that kind of theatrical ability to take walls apart and such. The creature itself wasn’t there at all times, because it’s barely in the movie. Sometimes it would just be, like, the scene where the hat and the coat form into fangs. Things like the cockroaches, they were there; it was a brand new studio, and I think they may have had a rig set up to chill the cockroaches to try and slow them down, but a lot of them escaped and have a beautiful home now in that new building [laughs].

For a low-budget film, it was quite tricky, because there was a child and a dog, and a studio situation where we had to light every scene, and we had very little time and very little money. It was an amazing effort, particularly from the design team, who were painting sets night and day. And it was very much all in camera, a group of people working very hard to make something great. Certain things were going to be computer-generated to make them more elaborate, but often we kept them as they were. Like when Amelia kind of purges herself—that was going to be much longer and bigger, but I just put on a very nice face with vomit coming out of my mouth from a tube, and they were fine with that! That was the last shot we did, and everyone was cheering that I had done such an excellent vomit [laughs]!