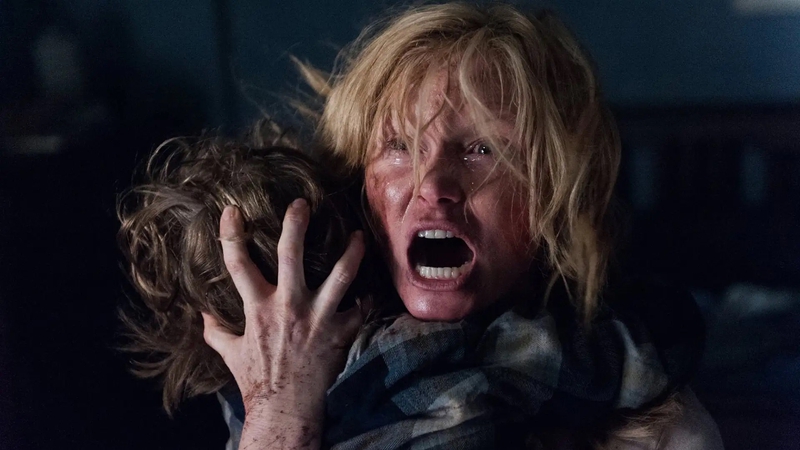 Editor's Note: This was originally published for FANGORIA on November 25, 2014 and we're proud to share it as part of The Gingold Files.

You’ve no doubt read all sorts of great stuff about The Babadook at this site and elsewhere, so let me simply add my voice to the chorus of praise. Genre fans, this is the real thing—a powerfully frightening film that also exemplifies horror’s capability to address other, equally strong emotions and issues.

The threatening of the family unit, either from within or without, is one of the most elemental tropes in fear filmmaking, hitting viewers literally where they live. In The Babadook, the disturbances come from both sides, and from the past as well as the present. An opening nightmare scene reveals that Amelia (Essie Davis) is still haunted by memories of the car accident that took her husband’s life as they were driving to the hospital so she could deliver their child. Seven years later, little Samuel (Noah Wiseman) seems cued in to the psychological demons lurking in his mommy’s mind, and has become obsessed with defeating them, crafting homemade weapons with which to fight the “monsters” troubling and distracting her.

As presented by writer/director Jennifer Kent, these are not misplaced, innocent attempts at heroics. Samuel is as emotionally damaged as his mother—perhaps more so, acting out in ways that threaten to get him expelled from school and don’t make things any easier at home. Trying to remain sympathetic and cope as best she can, Amelia is led closer and closer to the end of her rope, and into territory rarely explored on screen: that place where parents stop loving their kids. This theme (which, ironically, may have seen its most conspicuous expression thus far in comedy, specifically the routines and TV show by Louis C.K.) is the galvanizing foundation of The Babadook, anchored by the remarkable performances by Davis and Wiseman, who rivet your attention, break your heart and put you on edge even before the titular creature shows up.

When it does, it comes loaded with metaphorical baggage that Kent never forces or overplays, instead focusing on the distinctive vehicle by which it enters Amelia and Samuel’s world. Call it Mister Babadook, after the mysterious red-bound volume that Samuel discovers on his shelf and that Amelia ill-advisedly reads to him as a bedtime story. Looking like a pop-up book as crafted by Edward Gorey or Charles Addams (and actually designed by Alex Juhasz), it tells, in chilling verse and shades of black and grey, of a specter that—like a vampire—wants to be invited in, and once it arrives, it can’t be gotten rid of. Those illustrations are a well-judged, perfectly unnerving herald for the arrival of the Babadook itself, which infiltrates the scenario not as a CG specter, but via sparing use of live-action FX occupying a shadowy, jittery ground between costuming, pixilation and stop-motion.

Is the Babadook a manifestation of Amelia and Samuel’s trauma existing only in their headspaces, or a supernatural invader come to prey on their grief? Kent avoids making that question the simplistic focal point of the drama, which always remains rooted in the complex mental spaces of Amelia and Samuel. In the former, Kent and Davis have created one of fantastic cinema’s great tortured protagonists, trying to hang onto her motherly instincts under circumstances in which she needs to the most. It’s a wrenching performance, and watching Amelia sink deeper into the seemingly inescapable nightmare unfolding within her home would be almost unbearable were it not for the undercurrent of strength also flowing beneath her surface. Wiseman is a revelation, a young actor who never seems to be acting, free of any child-performer affectations and inhabiting his part so fully, he seems to simply be the tormented Samuel.

Kent surrounds her two sterling leads with impeccable craftsmanship that accentuates the tension in all the right ways. Cinematographer Radoslaw Ladczuk’s funereal hues complement Alex Holmes’ production design of a house haunted as much by sadness as by an unearthly invader, and the low-tech special FX are of a piece with Kent’s classical approach to scares and suspense (her inspirations reach all the way back to the seminal work of silent-film pioneer Georges Méliès, whose A Trip to the Moon is seen on a TV screen). Composer Jed Kurzel and sound designer Frank Lipson conjure up an aural atmosphere to match, highlighted by the eerie whispers of the Babadook as it hovers over Amelia’s body and mind.

Though filmed in Australia, the movie could be set anywhere, and this non-specificity is part of what makes it so effective. It aspires to and achieves a humanistic appeal to the universal fear centers, and it’s a riposte to the gimmickry and juvenilia that has suffused too much recent paranormal cinema. The Babadook is adult horror, strong stuff that mines dangerous thematic ground and unearths disturbing, compelling riches.