On NOPE, Impossibility, And The Sublime

Jordan Peele describes his latest feature, Nope as a film concerned with “our addiction to spectacle”; our hunger for it and the violence that often comes with its satiation. Defined as “a visually striking performance or display,” a spectacle is anything that draws the gaze of an audience and long before the invention of moving images, the most popular forms of public entertainment included music, dance, and theater performances, traveling zoos (human and nonhuman alike), freak shows, market fairs, blood sport (again, human and nonhuman alike), and perhaps most significantly, punishment, humiliation, and execution. An animal performing a trick is a spectacle. So too, is a minstrel show. A lynching. A viral video of someone’s murder or rape.

The commodification of spectacle beget the creation of the modern entertainment industry (indeed, the very idea of an “entertainment industry”) and so Peele uses the very first moving image- a two second clip of a Black jockey riding a horse- to illustrate how Black people have always been the mutual creators and subjects of American entertainment and have been erased from these histories and their surrounding recognition with equal consistency. 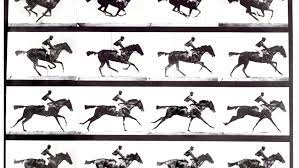 “We know who Eadweard Muybridge is, the man who created the clip,” Peele says, “but we don’t know who this guy on the horse is. He’s the first movie star, the first animal trainer, the first stunt rider ever on film, and no one knows who he is!”

It’s an absence in the archive, the implications of which are more akin to a sinkhole: one that starts small and gradually gets bigger and bigger until the entire foundation of what you think you know about American entertainment culture is eventually swallowed. But it’s an absence that also begets and is filled with a profound grief, to which Nope is in part both response and remedy. 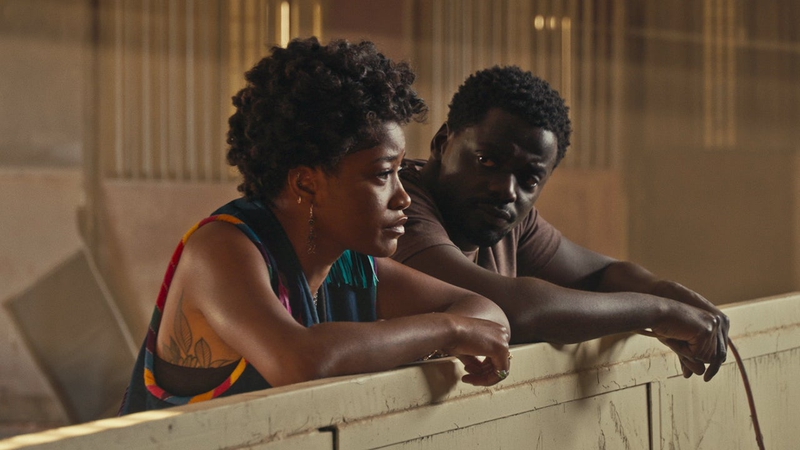 Instead of turning away, Peele writes into this absence; gives name and flesh, narrative and legacy to the unknowable. The man in Muybridge’s clip becomes Alistair E. Haywood, a Bahamian jockey and the great great-great-grandfather of siblings, Emerald (Keke Palmer) and OJ Haywood (Daniel Kaluuya), for whom horse training has been a family tradition and business. We learn of this legacy during a positively luminous onset safety spiel delivered by Emerald with the conclusion that “since the moment pictures could move, we’ve had skin in the game.”

The choice to fill in these details through fiction is a practice of both speculative and critical fabulation, terms coined by Donna Haraway and Saidiya Hartman respectively. “Fabulation” refers to the act of myth-making, while the distinction between “speculative” and “critical fabulation” rests on said myth’s interaction with the historic record. Speculative fabulation articulates science fiction’s capacity to blend “the factual, fictional, and fabulated,” where Hartman posits critical fabulation treats these “silences in the archive” as a speculative space; a jumping off point “to tell an impossible story…to amplify the impossibility of its telling.”

Nope draws audiences’ attention to the violence of the negative space that floats around the Muybridge images by filling it with “a visually striking performance” in the form of a sci-fi horror film; one that tells a seemingly “impossible story” about two siblings’ quest for “the impossible shot.” The film is mythic, its characters are mythic, and I don’t think it’s too much of a stretch to consider the Haywood claim of descendancy could also potentially be mythic as well (primarily because it already is). But is the myth closer to the truth than the actual archive allows?

The relationship between Emerald and OJ is the beating heart of this project. When they inherit the ranch and business after their father, Otis Sr. (Keith David) dies under sudden and mysterious circumstances, their differences are brought to the forefront; the space between them tense with the burdens and disappointments of blood relation. But all this tension ultimately comes down to their capacity to see each other.

When weird ass shit starts happening at the ranch, their motivations as individuals- Emerald’s hunger to be recognized by Hollywood, OJ’s hunger to keep his father’s business alive- come into alignment and together they set out to capture “the Oprah shot”: an undeniable image of the UFO that stalks their rural valley home. But it’s not just their personal endeavors that seem to drive them. Just under the surface is the sense that history has come full circle, and they are once again a family who happen to find themselves at the mouth of the future. And because they’ve been raised on the legend of stolen renown, they are eager not to let the opportunity be co-opted by someone else.

Elucidated in Nope is this core tension of Black life: the desire to be seen, to be recognized, to be celebrated, even as said desire conflicts with the historically predatory nature of the white gaze. What does it mean to actively seek the attention of something that wants to eat you and spit out your bones? 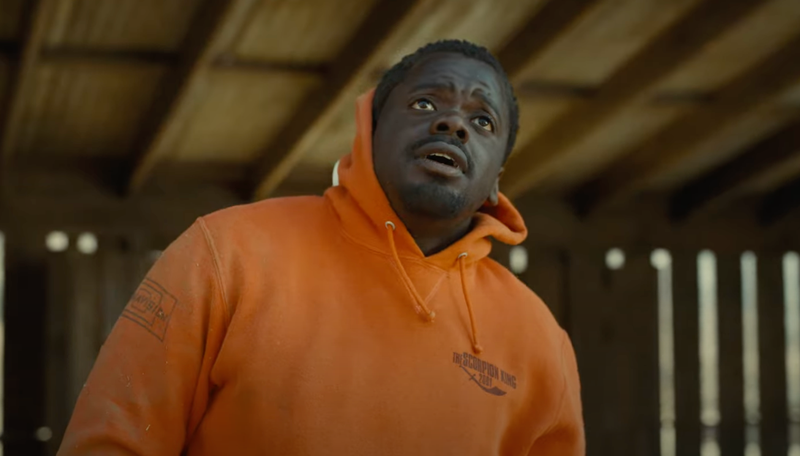 The act of looking and being looked at is exceedingly significant in this film, as are the implications of the choice to either look or turn away. Eyes peer out from posters, photos, cameras, screens, mirrored reflections–even clothing (shout out to costume designer, Alex Bovaird for Emerald’s excellent Prince and awooga wolf shirts). And though these implications exist for every character, they are most emblematic in Ricky “Jupe” Park (Steven Yeun), the siblings’ amusement park-operating neighbor.

A former(ly tokenized) child star of the ‘80s and ‘90s, Jupe is haunted by a traumatizing experience on the set of the family sitcom, Gordy’s Home, in which the sound of balloons popping triggers a rampage response in “one of the chimps that played Gordy.” Though others on the set are mauled, the chimp recognizes Jupe and, distressed, seeks connection with him in a shot that invokes the iconic finger-touching scene in Spielberg’s E.T. the Extra-Terrestrial. 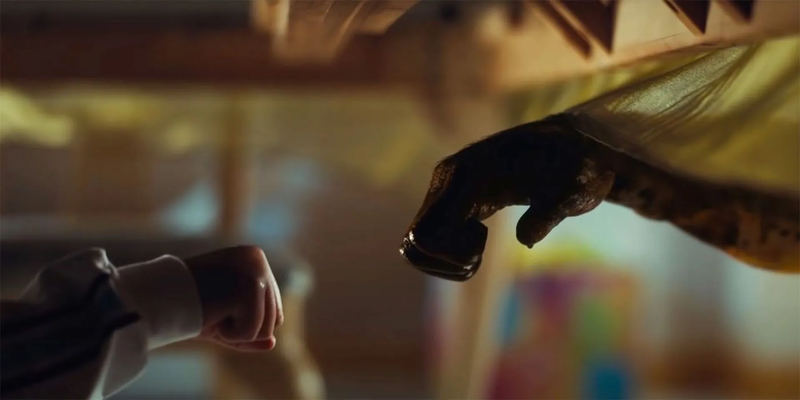 The real life event the film alludes to also conjures other instances of highly intelligent animals (oftentimes apex predators) attacking their human trainers (or captors, depending on how you view it). Neither Jupe nor the unnamed chimp are alien of course, but they encounter one another in a space of profound alienation as their image is actively being consumed by an alien nation.

Foundational to Afrofuturist aesthetics, preoccupations, and themes is the understanding that American history is one of alien invasion and colonization and as it intersects with the slave trade, alien abduction (in which the Europeans are the aliens, to be clear). They arrived, looked at us, called us subhuman, chained us in vessels that transported us to different worlds where we were forced into enslavement and transformed into consumables for the nourishment of white wealth and industry. But it began with the act of looking; of being something to look at, to laugh at, to point to and grimace. Something to project on. And how that is actually a profoundly dangerous space to occupy if what you are perceived as is something to be eaten.

Nope is all about spectacle—about this act of looking or not looking. But at its most skeletal level, what that comes down to is the dynamic between predator and prey item. OJ is an animal trainer attuned to the frequency of his charges, who consistently expresses a subtle irritation at the dumb arrogance of humans disconnected from the world around them. His frustration mimics that of an audience watching a horror movie where the white people onscreen make stupid ass choices; choices Black audiences know a Black person would be unlikely to make. OJ sees that shit coming, says “nope,” and waits for the coast to clear before he makes his next move.

Epigenetics is often discussed in the context of generational trauma but what of the epigenetics of survival? Is it his attunement to horses- prey animals- that allows OJ to identify and predict the UFO’s hunting patterns and dominance behaviors? Or is it because he is himself a prey item, descendent of people preyed upon? Is it social anxiety that necessitated the development of his subtle-if-acute powers of observation? Or is it the muscle memory of another time, when survival necessitated we stay two steps ahead and out of sight of our captors? A time when looking directly at said captors could get you beaten, incarcerated, or killed? In what ways are OJ and Emerald implicated in these same exploitation models? And what does this indicate about the conflicts between social predetermination and individual agency?

Spectacles of violence are social bonding rituals, and “the spectacle-isation of Black people,” as Peele puts it, is part of the routine maintenance of white supremacy as a social order. To be made a spectacle is to be stripped of your humanity, but more important than the act itself is that others witness the spectacle; that it sends a message. That witnessing should inspire fear so that fear can nourish power so that power can define truth and history and the constitution of the real or natural. It is, in other words, dominance behavior. The same dominance behavior exhibited by every predator this planet has ever known.

Peele’s UFO is utterly unique. It is at once an eye, a mouth, a digestive system, a black hole, an angel, a monster. But first and foremost, it’s an animal. Not of planet earth and yet, aggressively similar to some on planet earth. Like most animals, it does not respond well to direct eye contact, is territorial, and like most predators, the prospect of its capture and conquest inspires the attention of a very specific set of individuals.

If we’re comparing the film to Jaws (as many have), the TMZ biker would be the fishermen Hooper flippantly says are “going to die” while the grizzled cinematographer, Antlers Holst (Michael Wincott)- whose hand-cranked Franken-camera Emerald, OJ, and their IT recruit, Angel (Brandon Perea), rely on to capture “the Oprah shot”- would be Peele’s answer to Quint. After a career spent chasing “the impossible,” when he finally meets it, this displaced desire initiates a sort of rapture ultimately revealed as death drive.

The American Romantic tradition (the foundation of American literature) exalts what’s known as the sublime: the meeting place of awe and terror. Because Jean Jacket is a manifestation of the sublime- something terrible and beautiful and impossible to behold- she ultimately reveals this unavoidable truth that to see is to consume, that to be seen is to be consumed. That no one knows this better and more fully than the marginalized; that our survival has always been predicated on our capacity to see without necessarily looking; to not spook in the face of that which hunts us; to practice discernment so as to stay ahead of the spectacle.